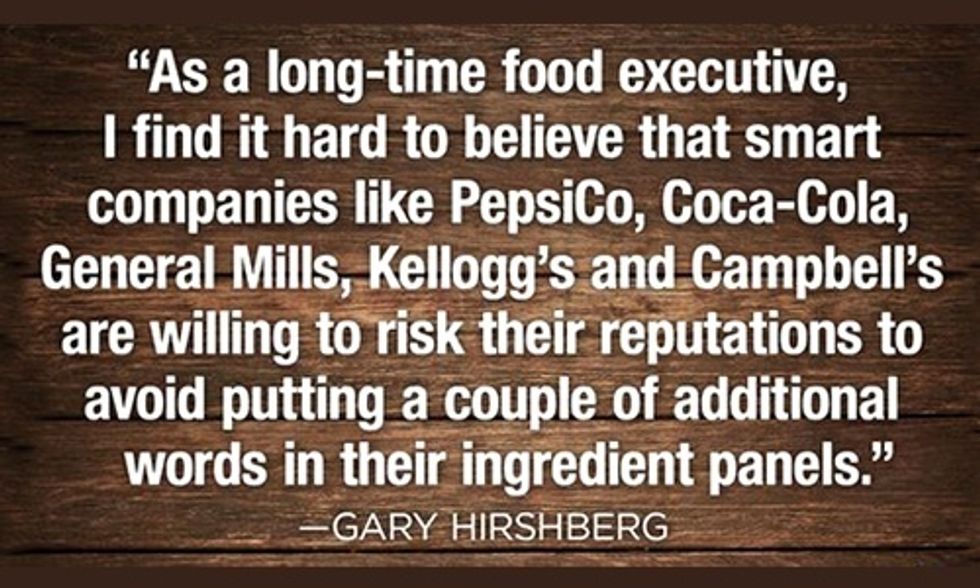 Legislation dubbed the Deny Americans the Right to Know, or DARK Act (H.R. 1599), passed the House of Representatives yesterday by a vote of 275-150. The bill preempts state and local authority to label and regulate genetically engineered (GE) foods. A Senate version of this bill has not yet been introduced.

“It’s outrageous that some House lawmakers voted to ignore the wishes of nine out of 10 Americans,” said Scott Faber, senior vice president of government affairs for Environmental Working Group (EWG). “Today’s vote to deny Americans the right to know what’s in their food and how it’s grown was a foregone conclusion. This House was bought and paid for by corporate interests, so it’s no surprise that it passed a bill to block states and the FDA from giving consumers basic information about their food.”

More than 300 organizations, companies and food industry and social justice leaders oppose the DARK Act in the face of massive spending and lobbying by big chemical and food companies, according to EWG. Polls show a large majority of people in key states and across the country support mandatory GMO labeling.

“We’re confident the Senate will defeat the DARK Act,” added Faber. “We continue to hope that thoughtful food companies that listen to their customers will work with consumer groups to craft a non-judgmental GMO disclosure to put on the back of food packaging. Americans should have the same right as citizens of 64 other countries to know what’s in their food and how it’s grown.”

Americans should have the same right as citizens of 64 other countries to know what’s in their food and how it’s grown. Image credit: Just Label It

To call on Americans to ask popular food brands to stop funding anti-labeling efforts and stand with the overwhelming number of Americans who support mandatory GMO labeling, Just Label It launched the “Conceal of Reveal” campaign.

"We are disappointed but not surprised that the majority of House members have sided with large chemical and food companies to protect corporate interests over the 90 percent of American citizens who simply want the right to know more about their food,” said Gary Hirshberg, chairman of Stonyfield Farm and chairman of Just Label It.

“As a long-time food executive, I find it hard to believe that smart companies like PepsiCo, Coca-Cola, General Mills, Kellogg’s and Campbell’s are willing to risk their reputations to avoid putting a couple of additional words in their ingredient panelsl" said Hirshberg.

"Instead, they continue to fund efforts that are exactly the opposite of what their consumers clearly want. It is clear that the tide of consumer support favors more transparency. Americans will now know how their representatives voted and that their favorite brands are keeping them in the dark.”

More than 30 states introduced legislation to require GE labeling in 2013 and 2014, with laws recently passed in Vermont, Connecticut and Maine, according to Center for Food Safety.

“Passage of this bill is an attempt by Monsanto and its agribusiness cronies to crush the democratic decision-making of tens of millions of Americans. Corporate influence has won and the voice of the people has been ignored,” said Andrew Kimbrell, executive director of Center for Food Safety. “We remain confident that the Senate will preserve the rights of Americans and stand up for local democracy.”

Center for Food Safety supports bipartisan legislation introduced by Sen. Boxer and Rep. DeFazio called the Genetically Engineered Food Right-to-Know Act, which would require that food manufacturers label foods that contain genetically modified ingredients. This bill would guarantee Americans the right to know what is in their foods while respecting the need by companies for a uniform, federal standard.

According to Center for Food Safety, a number of messaging amendments were offered by champions of labeling and states’ rights intended to underscore the bill’s flaws, however all four failed to pass:

Leading opponent of the bill, Rep. Peter DeFazio (D-OR) offered an amendment that if passed would have required that any U.S. company who produces a product in the U.S. be bound by the same labeling requirement held in another country.

Rep. Chellie Pingree (D-ME) offered an amendment that would have removed everything from the underlying bill with the exception of provisions establishing a non-GMO certification program at USDA.

Rep. Rosa DeLauro (D-CT) offered an amendment to specify that as FDA defines the term “natural,” that it does so to exclude GE foods and ingredients.

An amendment offered by Rep. Jared Huffman (D-CA) would have ensured that the preemption provisions in the underlying bill do not abdicate the sovereign right of Native American tribes to prohibit or restrict the cultivation of GE crops on tribal lands.

An amendment to change the name to the Denying Americans the Right to Know or DARK Act was introduced by Rep. Jared Polis (D-CO) after the final vote.

9 Out of 10 Americans Want GMO Labeling: Congress Should Vote ‘No’ on DARK Act