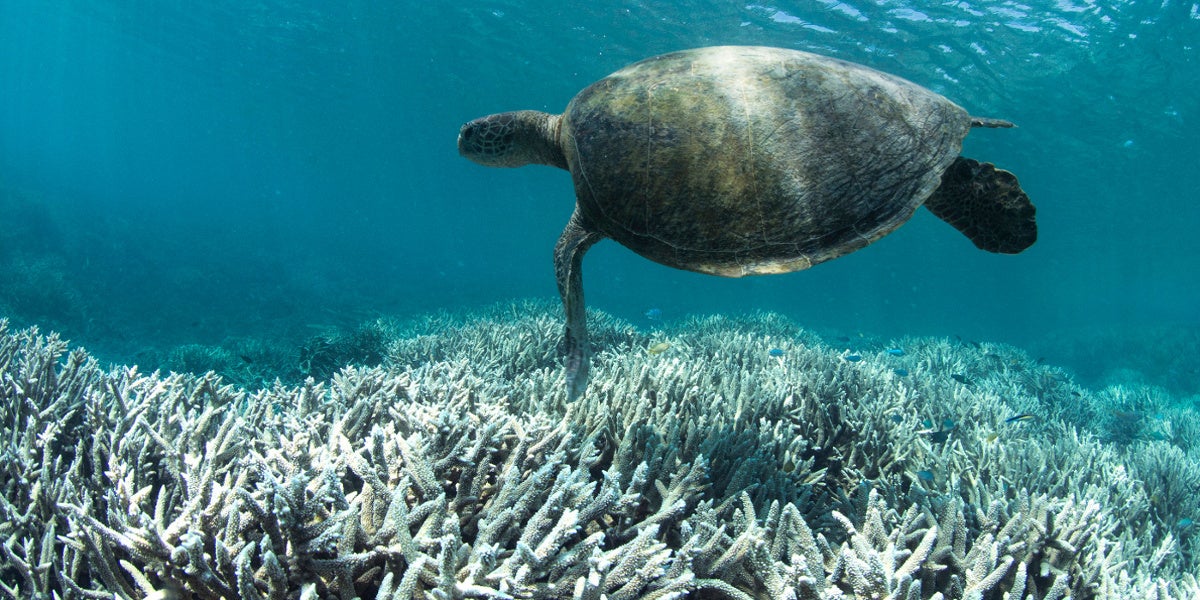 A turtle swims over the bleached coral at Heron Island on the Great Barrier Reef in February 2016. The Ocean Agency / XL Catlin Seaview Survey / Richard Vevers

The record-breaking marine heatwave in 2016 across the Great Barrier Reef has left much of the coral ecosystem at an “unprecedented” risk of collapse, research shows.

A new study published in Nature finds that the surge in sea temperatures during the 2016 bleaching event led to an immediate and long-lasting die-off of coral.

This, in turn, led to vast swathes of the reef being transformed into “highly altered, degraded systems,” which are now vulnerable to total “ecological collapse,” the authors conclude.

The large-scale loss of coral is a “harbinger of further radical shifts in the condition and dynamics of all ecosystems,” they add, “if global action on climate change fails to limit warming to 1.5-2C above the pre-industrial baseline.”

Coral bleaching is primarily caused by prolonged exposure to high sea temperatures. Under continued heat stress, the corals expel the tiny colorful algae living in their tissues—known as zooxanthellae—leaving behind a stark white skeleton.

The algae provide the corals with energy through photosynthesis. Without them, the corals can slowly starve. Healthy corals can live from two to several hundred years.

The mass bleaching event of 2016, which took place in the summer months of February, March and April, was the most devastating on record, affecting 94 percent of reefs surveyed.

The new study estimates how heat exposure during this event affected the survival of coral and the make-up of species across the reef in the months that followed.

It finds that, after the event, many temperature-sensitive corals died suddenly as a result of heat stress, while others slowly starved over the course of several months. The paper concludes:

“The die-off of corals drove a radical shift in the composition and functional traits of swaths of the Great Barrier Reef from mature and diverse assemblages to highly altered, degraded systems.”

To assess immediate coral death following the 2016 heatwave, the researchers used a combination of aerial and underwater surveys spanning the full length of the reef. They then revisited the survey sites eight months later to gather data on long-term coral mortality.

The researchers next compared information on coral mortality over the eight-month period to heat exposure data, which was calculated using records of sea surface temperatures. 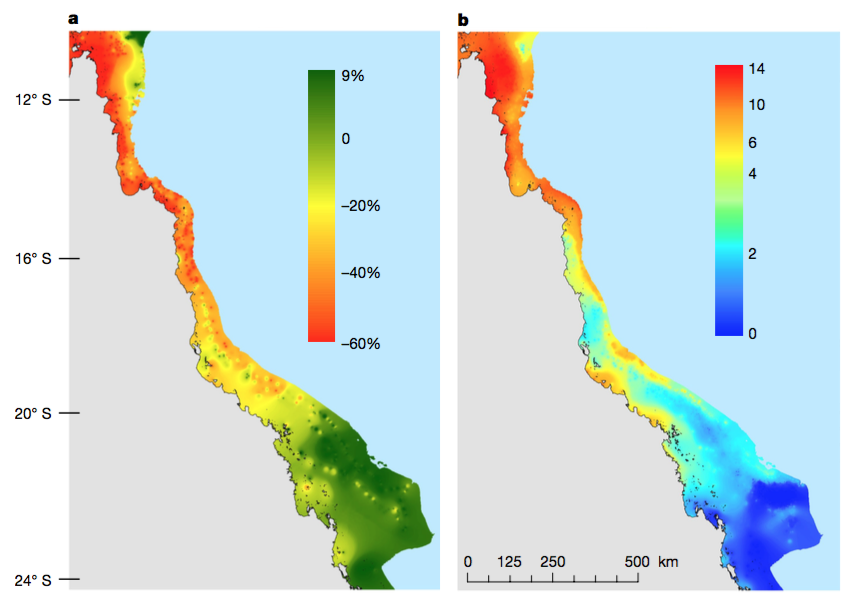 The results find that patterns of coral mortality closely match those of heat exposure across the reef.

In the northern third of the reef, where heat exposure was at its highest, “many millions of corals” died quickly in the two-week period following the coral bleaching event.

This mass mortality was a consequence of immediate heat stress, rather than slow starvation, the paper notes.

During the following winter months, a large proportion of bleached corals in the northern and central Great Barrier Reef continued to die at “unprecedented” levels, the researchers say.

The research finds that parts of the reef exposed to sea surface temperatures of 4C during the summer months experienced declines in coral cover of around 40 percent.

Meanwhile, reefs exposed to extreme temperatures of around 8C faced declines of 80 percent or more, the research finds.

In comparison, in the most southerly part of the reef, where corals were exposed to temperatures of between 0-3C, almost no loss of coral was observed over the study period.

As well as measuring coral mortality, the researchers also studied how the make-up of coral species changed over the eight-month period. 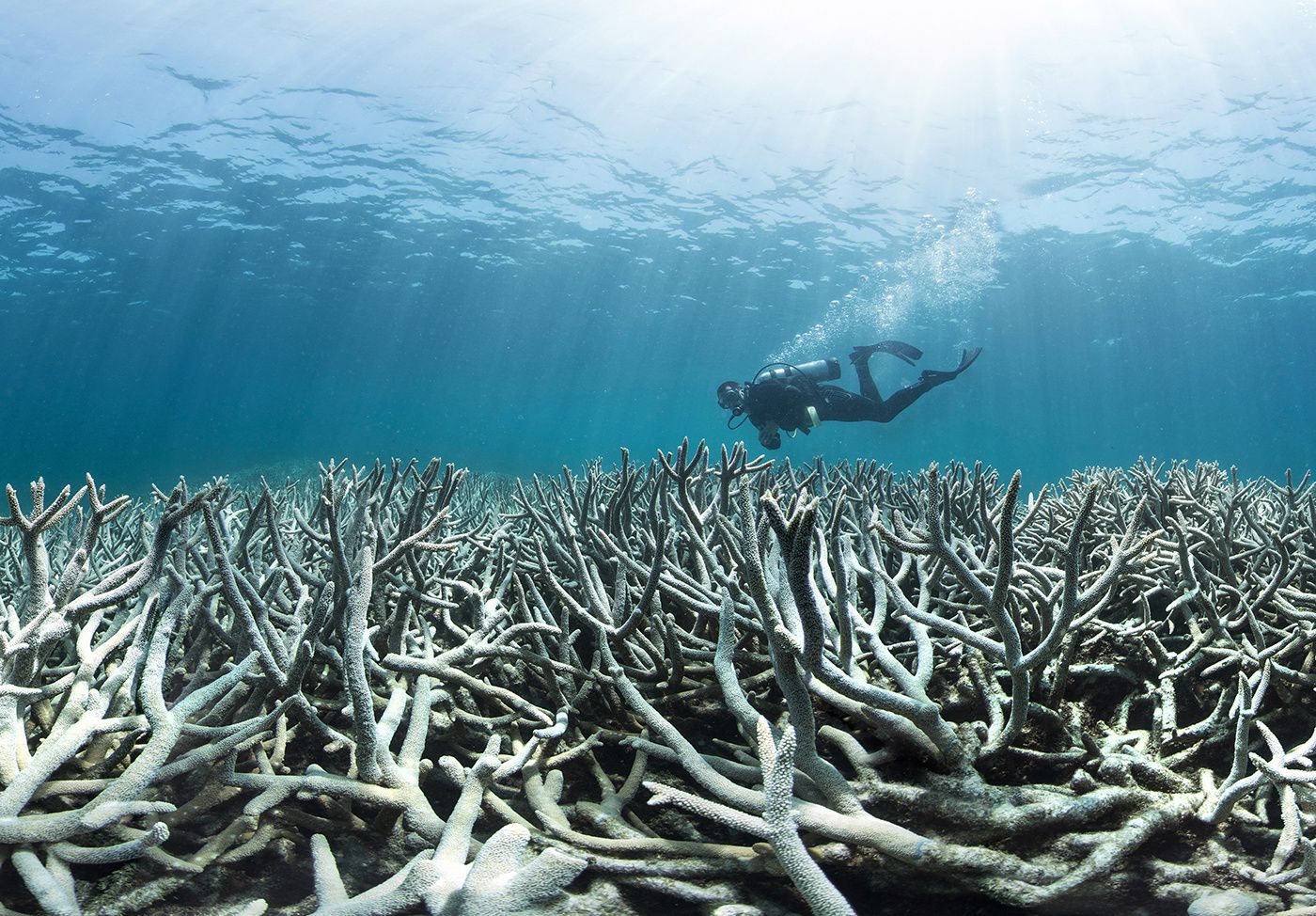 A diver checks out the coral bleaching at Heron Island in February 2016. This area was one of the first to bleach at Heron Island, which is located close to the southern most point of the Great Barrier Reef. The Ocean Agency / XL Catlin Seaview Survey / Richard Vevers

Their results indicate that some species were more affected by bleaching than others. This loss of species diversity could have far-reaching impacts on the coral ecosystem, said study co-author Dr. Mark Eakin, coordinator of the National Oceanic and Atmospheric Administration (NOAA) Coral Reef Watch program. He told Carbon Brief:

A typical coral reef can take 10-15 years to recover from a single bleaching event, Eakin said. However, climate change is causing the frequency of mass bleaching events to dramatically increase, he added:

“The Great Barrier Reef lost approximately 29% of its corals in 2016 and another 22% in 2017. The second consecutive year of bleaching damaged many of the hardier corals that had survived the first bleaching event.

However, limiting global warming to 1.5C, which is the aspirational target of the Paris agreement, could offer the Great Barrier Reef a better chance of survival, said lead author Prof. Terry Hughes, director of the Australian Research Council Centre of Excellence for Coral Reef Studies. He told Carbon Brief:

“We now have an international mechanisms, the Paris Agreement, to limit climate change. If we can achieve the 1.5-2C target, we can still have a healthy Great Barrier Reef.

“But it’s clear now that the future mix of coral species will be very different from just two years ago, before the unprecedented back-to-back bleaching in 2016 and 2017. Our study shows that this transition to a new, highly altered system is already underway—faster than any of us anticipated.”

I showed the results of aerial surveys of #bleaching on the #GreatBarrierReef to my students, And then we wept. pic.twitter.com/bry5cMmzdn

The study “paints a bleak picture of the sheer extent of coral loss on the Great Barrier Reef” following the 2016 mass coral bleaching event, said Prof. Nick Graham, chair in marine ecology at Lancaster University, who was not involved in the new research. He told Carbon Brief:

“Huge losses of coral also occurred in many other countries across the Indian and Pacific Oceans in 2016. A future with coral reefs, their rich diversity, and the livelihoods they provide to millions of people, is quite simple. It will only be possible if carbon emissions are rapidly reduced and we limit warming to 1.5-2C.”