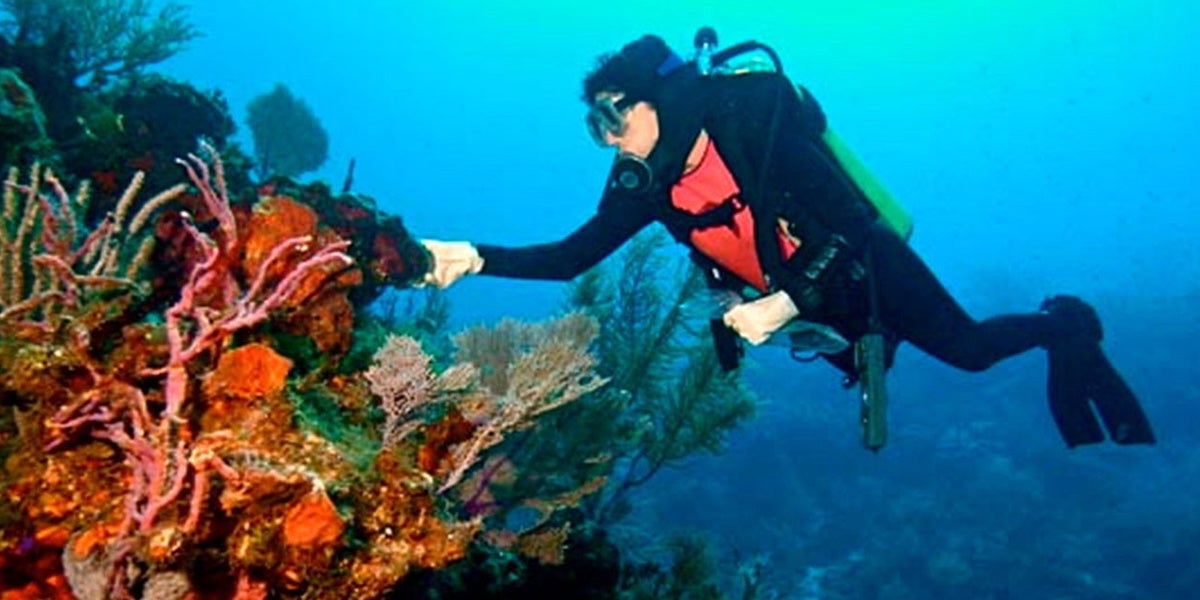 To Shirley Pomponi the sea sponges lining her office shelves are more than colorful specimens; they’re potentially lifesaving creatures, some of which could hold the complex secrets to cures for cancers and other diseases.

The marine biotechnology expert, who is research professor and executive director of the Cooperative Institute for Ocean Exploration, Research, and Technology at Florida Atlantic University’s Harbor Branch Oceanographic Institute, has spent more than 30 years studying deep-sea sponges, simple organisms that are often found in coral ecosystems in all of the world’s seas.

Sponges exist from the shallows close to shore to thousands of feet below the surface. Together with corals, they make up unique communities that have been barely studied but are natural disease fighters, which scientists believe hold important properties that already are producing treatments for some cancers.

Sponges and corals may appear primitive, Pomponi said, “But they have genes, proteins, and metabolic pathways that are similar to ours.” 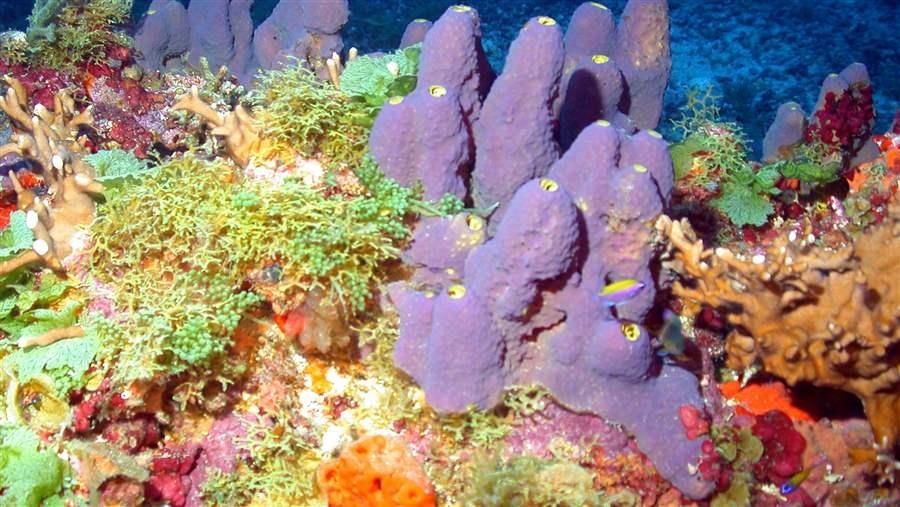 Tube sponges (Aiolochroia crassa) and corals share space in the deep waters of the Gulf of Mexico.NOAA

The medical promise of sponges and corals is a driving force behind efforts to conserve their valuable habitats, which are mainly threatened by damaging fishing gear, but also from oil and gas development, and changing ocean conditions. In the Gulf of Mexico, fishery managers are considering a proposal to safeguard coral and sponge hotspots by restricting damaging fishing gear, such as trawls, anchors, and bottom longlines, in up to 23 sites deemed a high priority for protection. (If you want to encourage managers to protect corals and sponges, sign our petition.)

Even with the deep sea’s promise for human health solutions, scientists don’t have plans to harvest corals and sponges for medical uses. Scientists would take samples that they could use to try to replicate in a lab the promising properties that sponges and corals produce in the wild.

“It would be economically and ecologically unrealistic to exploit these habitats, especially because corals and sponges provide habitat as well as feeding and breeding grounds for fish, crabs, shrimp and many other species,” said Pomponi, who earned a doctorate in biological oceanography from the University of Miami in 1977 and became an expert on the hundreds of different species of sponges throughout the Gulf of Mexico and beyond. 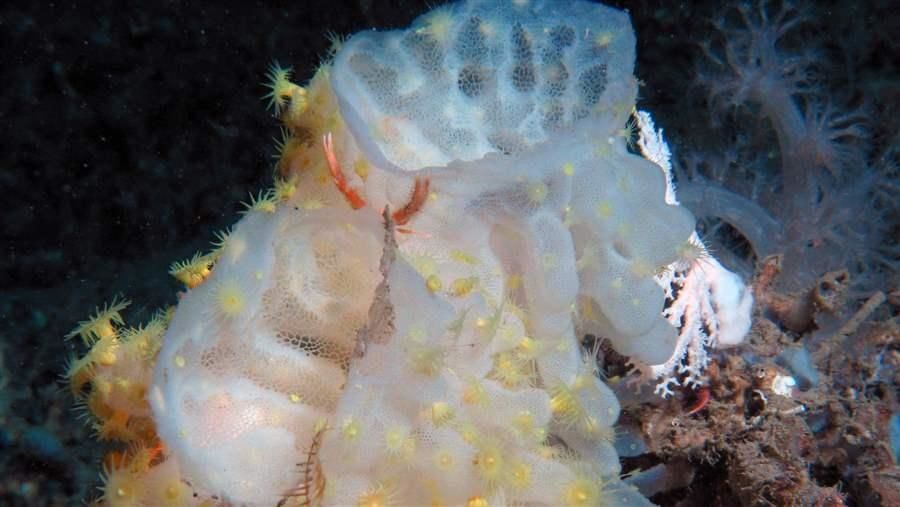 Sponges have existed in the oceans for 600 million years, surviving through mass extinctions and severe environmental stresses.

Sponges can’t move. To defend themselves they produce chemicals, some of which are shown to fight infection in humans, and further protect their territory by stopping other organisms’ cells from dividing and taking over—similar to how drugs stop the spread of cancer.

In fact, said Pomponi, in more than 45 years of studying sponges she’s never seen a tumor in one. “Somehow they make sure cancer cell precursors either repair themselves or die. What we can learn from that could mean a better understanding of how cancer develops in humans—and how we might even prevent it. We can not only tap into their arsenal of chemicals, but also their metabolic pathways for human health applications.” 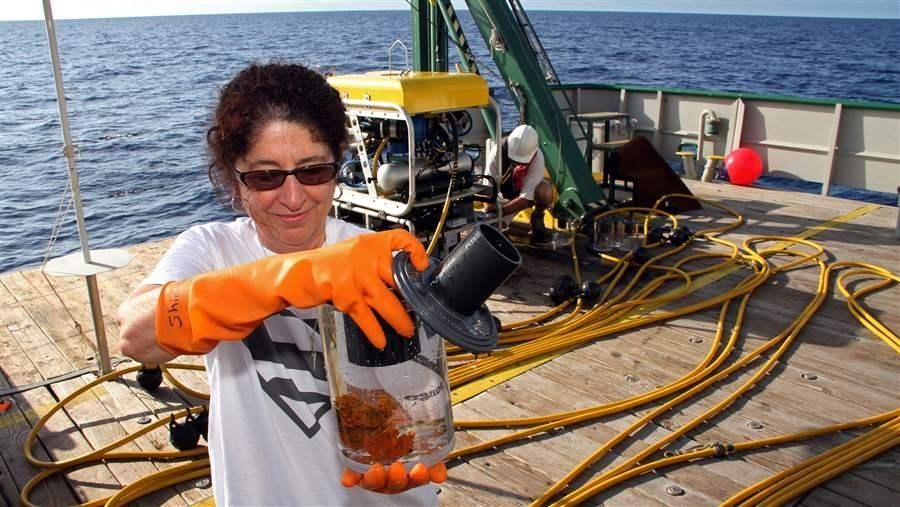 Discoveries from sponges already have provided antibiotics and cancer drugs, and their skeletons are being studied to develop ways to grow bone for grafting and dental implants. Some species in the Gulf of Mexico are used in drugs to treat breast cancer. Scientists see similar potential in deep-sea corals, which also have existed for millions of years. Researchers have discovered that one type of gorgonian coral, also known as sea fans, contains powerful anti-inflammatory chemicals, some soft corals have potential anti-cancer and anti-viral properties, and bamboo corals may also be useful in bone grafting. 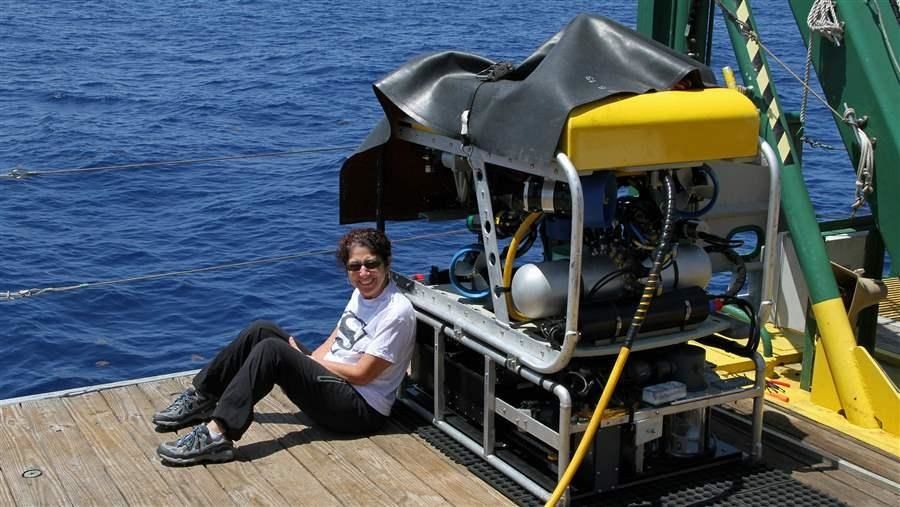 Shirley Pomponi rests next to the Mohawk remotely operated vehicle in the Gulf of Mexico in 2015. She regularly uses ROVs to explore deep-sea coral ecosystems.Shirley Pomponi

Pomponi’s institute has been exploring the Gulf of Mexico and other parts of the world and researching marine-derived chemicals since 1984. Yet with much of the Gulf and the rest of the world’s seas unexplored, the race is on between those seeking beneficial discoveries and the human activities that could destroy a potential cancer cure before it’s discovered.

Pomponi says the Gulf’s jewels have already been compromised. In one case, promising research on melanoma was slowed when scientists, seeking more samples of a key sponge, returned to where they had found it only to discover the area heavily damaged by trawls and the sponges gone. Scientists working on treatment for Alzheimer’s disease encountered a similar situation—nearly obliterated habitat. Those researchers eventually got one small sample, after combing through 30,000 photos taken in the area to locate a still-viable specimen.

“We want to avoid a situation where the environment is damaged and some unique animal that produces a chemical that could cure cancer or other dreaded diseases is destroyed,” Pomponi concludes. If these remarkable sea creatures aren’t protected, she adds, “Who knows what we’ll lose?”

Holly Binns directs The Pew Charitable Trusts’ efforts to protect ocean life in the Gulf of Mexico, the U.S. South Atlantic Ocean, and the U.S. Caribbean.