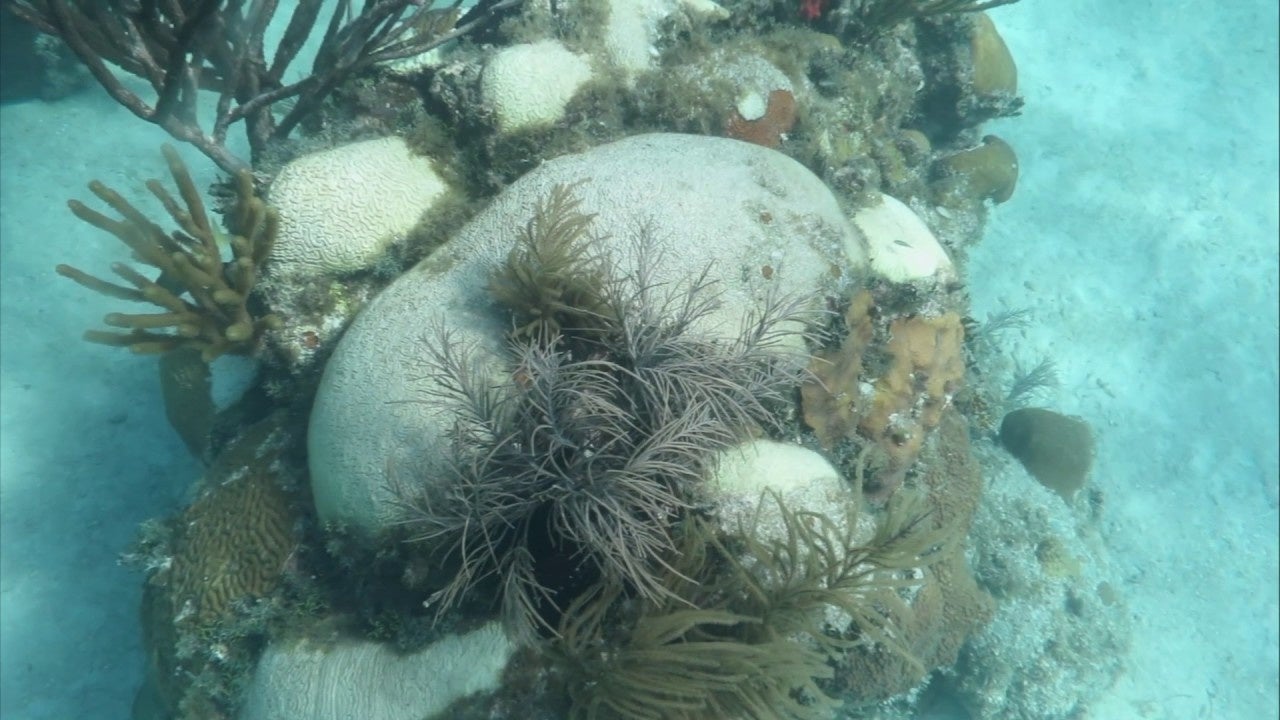 Off the coast of Broward County in southeast Florida, a 330-year-old coral colony has withered in the water thanks to a mysterious pathogen. At the height of its health, this slow-growing variety of coral, known as mountainous star, looked like a car-size brown mushroom cap scored by ridges and valleys and colored with splashes of fluorescent green. Today the countless minuscule sea-anemone-like polyps that form the colony have turned white and died, laying bare the skeletal structure below. 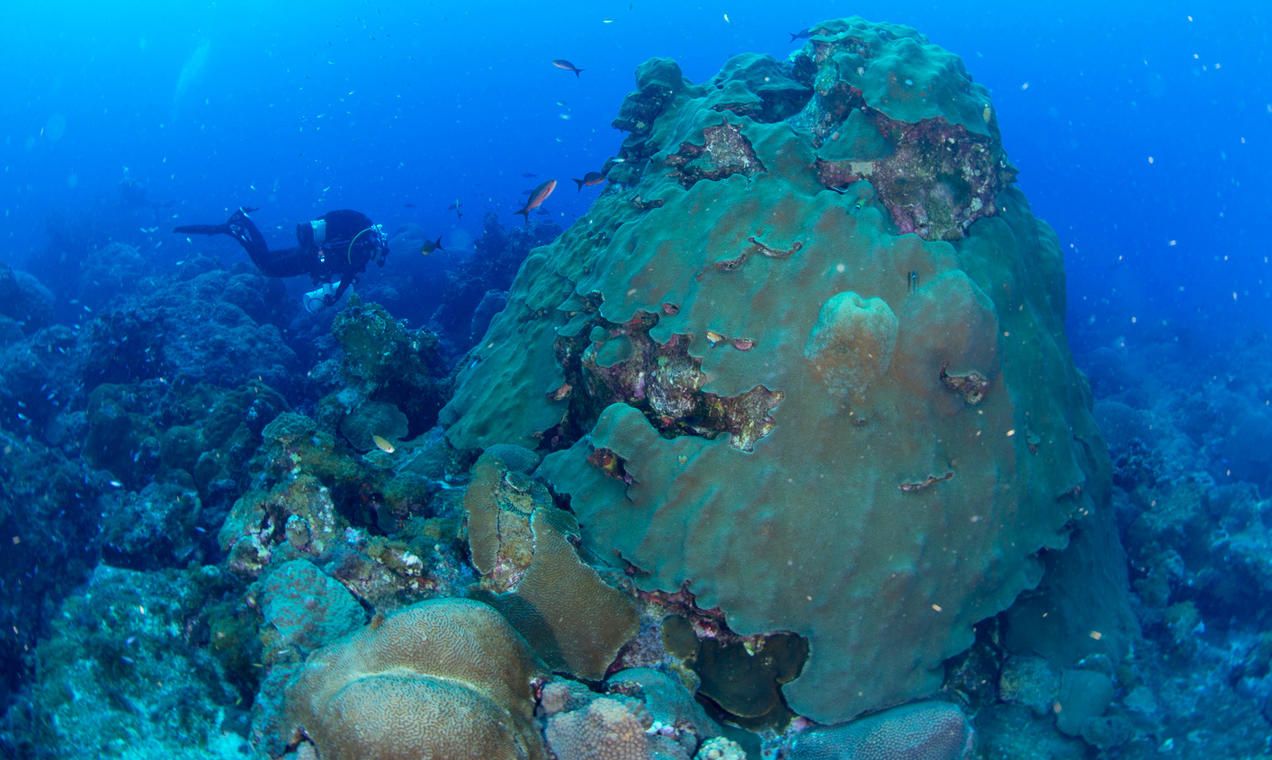 Corals all along Florida’s southeastern shore are succumbing to the same disease. In fact, more than half of the state’s Coral Reef Tract—an area 175 miles long and covering more than 100,000 acres—has been infected. It’s a rapid change in circumstance that has experts concerned and scrambling for answers and solutions.

“This is unprecedented,” said Karen Bohnsack, reef resilience coordinator for the Florida Department of Environmental Protection (DEP) Coral Reef Conservation Program. Never before has this number of coral species in an area of this size begun dying off this quickly, she said. “Unfortunately, as far as what it is that’s causing it, the only answer I can give is that we don’t know.”

There are in fact many unknowns in this unfolding coral murder mystery. Scientists have coined the generic term “white syndrome” to describe the unidentified virus or bacteria because of the white bands or uneven white blotches that engulf the coral. The disease has touched at least 21 of the approximately 25 species of stony, or hard, corals that help make up the Florida reefs. The most common of these, including staghorn, acorn, mountain star, cavernous and knobby brain corals, have all been dealt a hefty blow.

“If corals contract this white syndrome, in most cases the coral colony will die, and that’s what’s most concerning,” said Bohnsack. “We have seen an almost 100 percent mortality in this disease event.”

The first signs of white syndrome appeared in 2015 off Key Biscayne, a barrier island south of Miami. It appeared in tandem with the longest, most widespread, and most damaging global bleaching event on record, which stretched from 2014 to 2017. Coral bleaching and white disease are two separate events. Bleaching occurs when coral polyps release their colorful, symbiotic algae due to the excessive stress of warming water. Coral disease can occur with or without high heat stress.

“The reefs suffered severe bleaching in those years, and each event caused major outbreaks of coral disease in 2015 and 2016,” said Mark Eakin, coordinator of the National Oceanic and Atmospheric Administration’s Coral Reef Watch Program. “Unfortunately, the diseases are appearing much faster than scientists can identify them,” Eakin added. 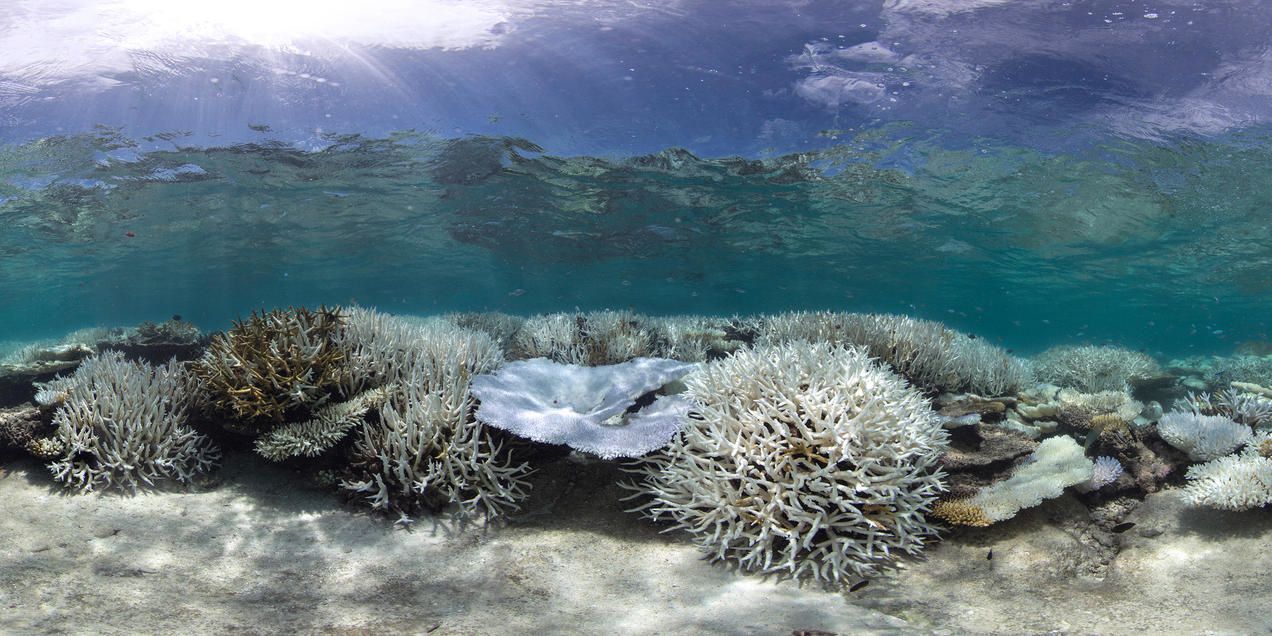 In the 1980s, coral diseases were restricted to a few warm-water areas such as the Caribbean. Now outbreaks occur almost every year and can be found in most of the world’s coral reef habitats, whether in remote ocean landscapes or near dense human populations, such as off the Florida coast.

The same goes for heat stress. The warm water that causes bleaching is now both hotter and more common than before, said Eakin. Coral reefs now bleach about four times more often than they did in the early 1980s, according to a recent article in Science.

Unfortunately, Florida’s white syndrome has not slowed in pace even though the most recent global bleaching event has ended and the waters have cooled. The disease is creeping southward, and scientists are trying to figure out why. Most difficult to understand is whether the heat made the pathogen stronger, enabling it to thrive where it wouldn’t otherwise, or weakened the coral, making the reefs more susceptible to disease.

“We’re not managing our resources properly, and that’s driving global change,” said David Gilliam, assistant professor of marine and environmental sciences at Nova Southeastern University in Florida. “It’s like there’s a base level of stress the reefs experience, then periodic moments of stress that drive the bleaching. Then we have all these people, runoff, and other nasty things that are further stressing our system. I think it is naive to think these aren’t anthropogenic declines.”

Last year, monitoring efforts by Gilliam’s team found a 35 percent loss of stony corals off the south Florida coast, he said. One species, the pillar coral, is on the verge of local extinction; only one of 65 known pillar corals remains alive. 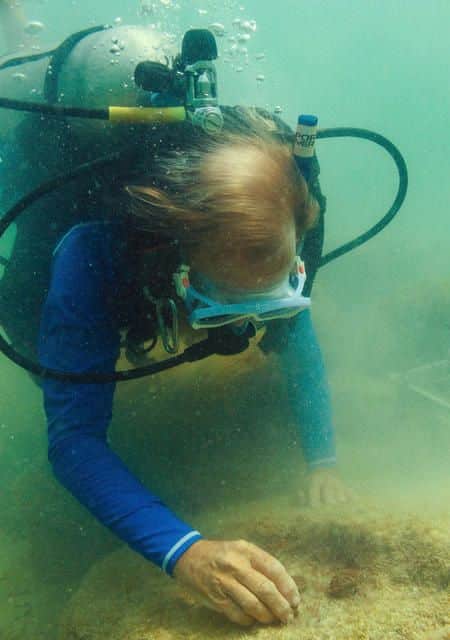 Even so, oceanic experts say all hope is not lost. The state of Florida allocated $1 million for coral disease monitoring and response for 2017–2018. Scientists are also finding novel ways to grow and replant the reefs. Dave Vaughan, executive director of the Mote Marine Laboratory’s International Center for Coral Reef Research in Summerland Key, Florida, is breeding local corals to be more resilient to bleaching, warming and disease.

Using a process called microfragmentation, he slices a golf ball–size mountain star coral into hundreds of fragments, and those tiny pieces regrow with impressive vigor. A coral that normally takes three years to grow to the size of a golf ball can now take about three months. When planted close together, the fast-growing corals fuse to form a larger colony.

“We can now bring back half a century of coral in a couple of years,” said Vaughan, who planted tens of thousands of corals last year. His goal is to plant a million before he retires in the next decade or so.

The importance of coral reefs cannot be overstated. The Florida Reef Tract provides $6 billion in income each year from tourism, fishing and other business, according to the DEP. Like the 330-year-old mountainous star coral mentioned above, the ancient systems that form this tract are biodiversity hot spots for a wondrous array of marine creatures and also provide essential coastal protection. It’s all part of the Sunshine State’s allure.

“There’s still so much out there to save,” said Bohnsack of the future of Florida’s reefs. “There are survivors even in some of the most susceptible species. I still have hope.”