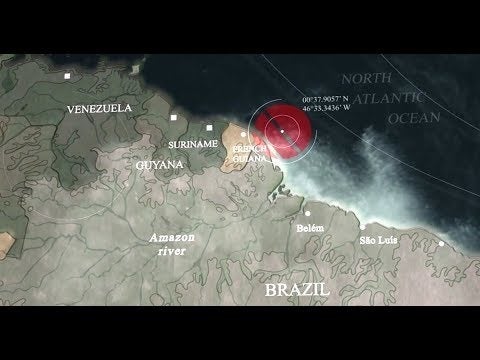 A team of scientists on board the Greenpeace Esperanza ship have documented the existence of a rhodolith field where French company Total intends to drill for oil, 120km off the northern coast of Brazil.

The finding proves the existence of a reef formation in the area and invalidates Total’s Environmental Impact Assessment (EIA), which states the closest reef formation is 8 kilometers (approximately 5 miles) away from one of the oil blocks.

“Now that we know the Amazon Reef extension overlaps with the perimeter of Total’s oil blocks, there is no other option for the Brazilian government but to deny the company’s license to drill for oil in the region,” said Thiago Almeida, Greenpeace Brazil campaigner.

“To learn the Amazon Reef extends beyond our expectations was one of the most exciting moments of my research about this ecosystem,” said Fabiano Thompson, oceanographer and professor at Rio de Janeiro Federal University. “The more we research about the Amazon Reef, the more we find. We still know so little about this fascinating new ecosystem and the knowledge obtained so far indicates any oil drilling activity could seriously harm this unique system.”

Rhodoliths are calcareous algae that work as a habitat for fish and other reef creatures. Its presence confirms the Amazon Reef extends further than previously expected, as revealed in the scientific magazine Frontiers in Marine Science. The paper, based on footage of the reef captured in January 2017 during Greenpeace’s first expedition to the region, estimates the Amazon reef to be 56,000 square kilometers (approximately 22,000 square miles)—almost six times larger than previous scientific estimates.

“In 2017, I had an opportunity to explore the Amazon Reef for the first time, and was floored by the diversity of habitat types and the beauty of this unique area,” said Greenpeace USA oceans campaign director John Hocevar. “The more we learn about what lies beneath the surface, the harder it is to imagine sacrificing our oceans to offshore drilling. There is just too much at stake.”

The paper also indicates this larger reef could be a marine biodiversity corridor linking the South Atlantic ocean to the Caribbean, with a faunal overlap from both places leading to high species richness. The paper confirms the presence of typical Caribbean fish species in the reef, such as the Blue Chromis (Chromis cyanea). The most abundant scleractinian coral species recorded was the Ten-ray Star Coral (Madracis decactis), a species that is usually found from the Gulf of Mexico to south of Brazil.

Total has applied for a license to drill for oil in the Amazon Reef region and operations could start as early as this year. Greenpeace is calling on the oil giant to cancel its project. A spill in the region could be devastating to a biome that scientists have barely studied and to coastline communities that depend on a healthy ocean for their way of life. The Brazilian government’s decision is due in the next few weeks.