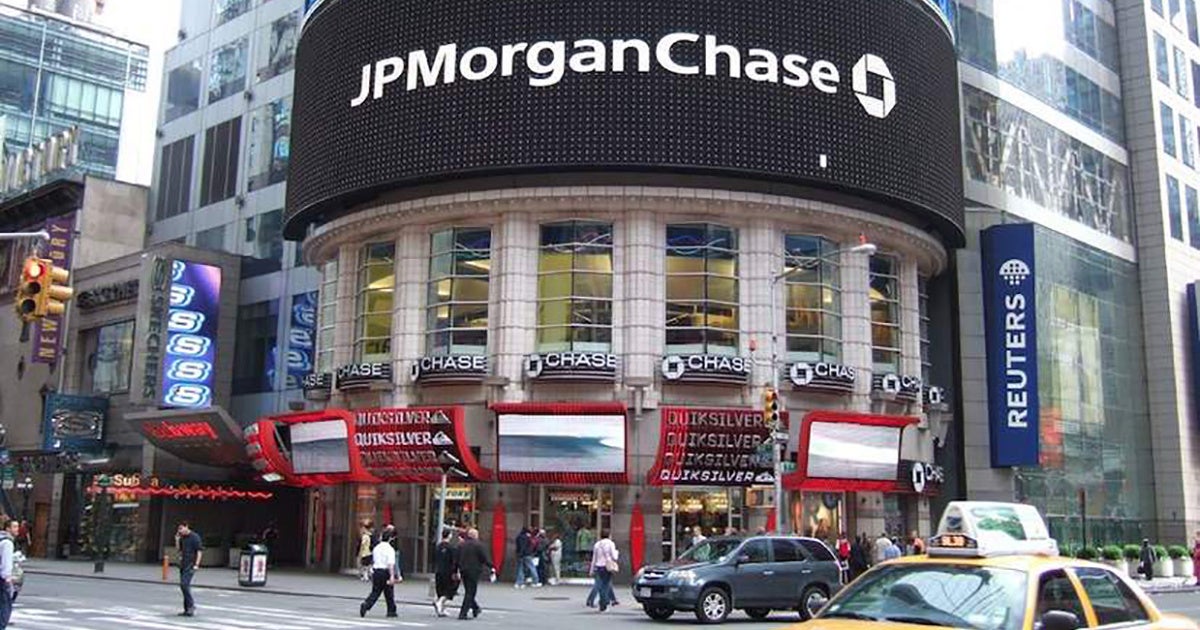 The top four banks that invested most heavily in fossil fuel projects are all based in the U.S., and include JPMorgan Chase, Wells Fargo, Citi and Bank of America. Royal Bank of Canada, Barclays in Europe, Japan’s MUFG, TD Bank, Scotiabank and Mizuho make up the remainder of the top 10.

This report comes as March has already brought deadly weather to places such as the American Midwest, where historic flooding has left four dead and farm losses could reach $1 billion, and Mozambique, where Tropical Cyclone Idai has devastated the East African country and President Filipe Nyusi estimated that more than a thousand people are likely dead.

Both disasters have been linked to climate change. “Increased flooding is one of the clearest signals of a changing climate,” said 350.org co-founder Bill McKibben in a statement published by ThinkProgress, adding that flooded Nebraska’s “current trauma is part of everyone’s future.” 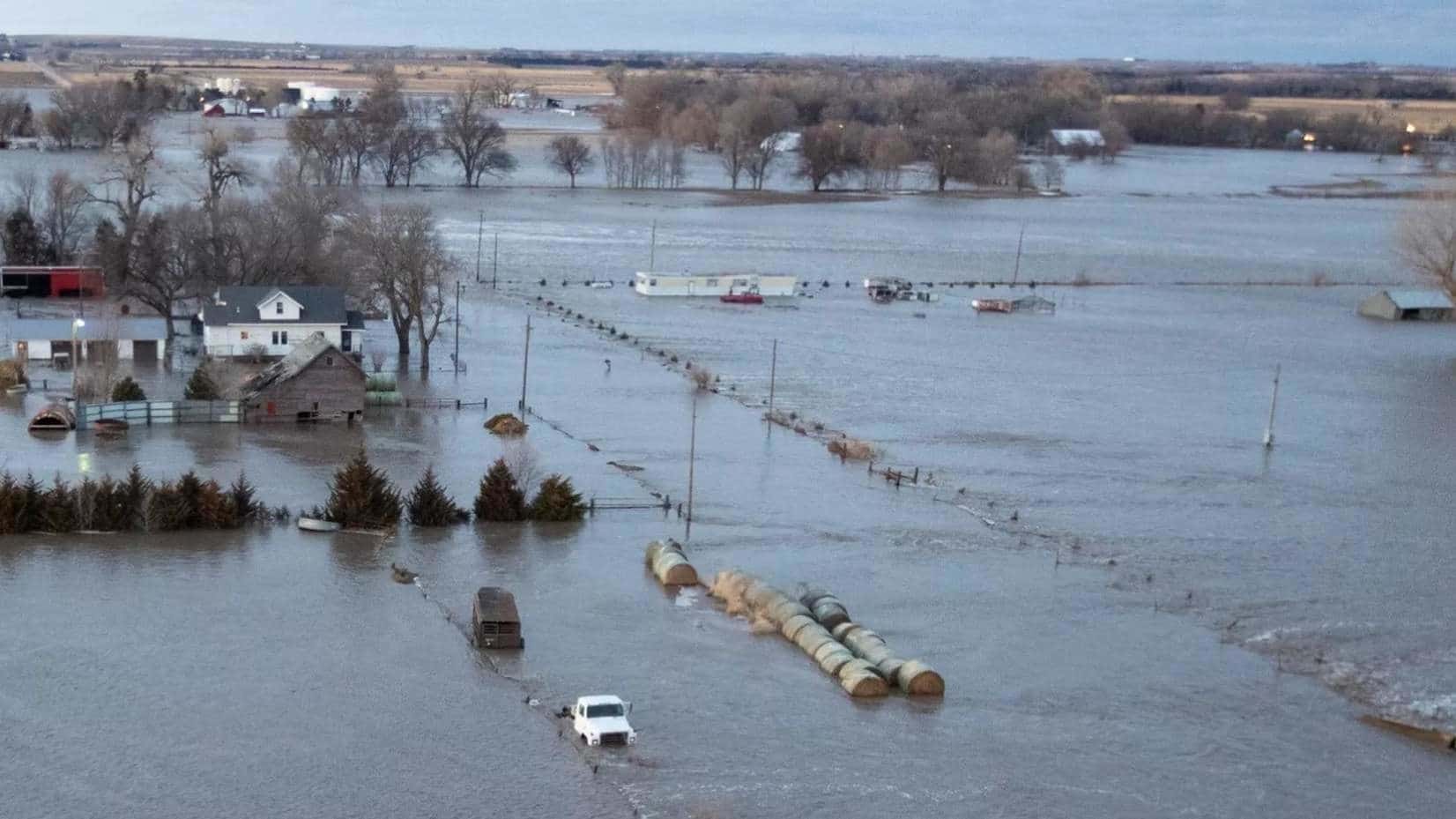 “One inescapable finding of this report is that JPMorgan Chase is very clearly the world’s worst banker of climate change,” the report, titled “Banking on Climate Change,” found. “The race was not even close: the 6 billion the bank poured into fossil fuels between 2016 and 2018 is nearly a third higher than the second-worst bank, Wells Fargo.” 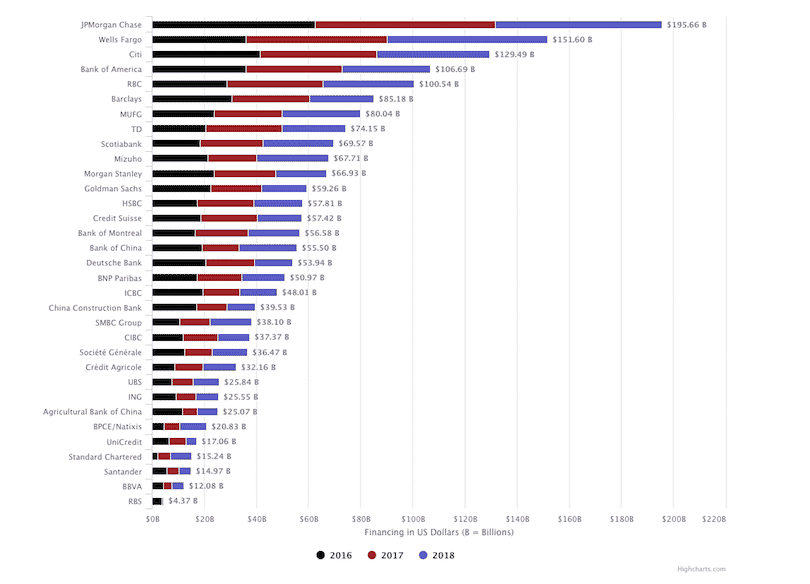 Past report cards by the groups have focused only on coal, or on “extreme” fossil fuel projects, like tar sands extraction, ultra-deepwater oil drilling, and coal mining, and power generation. 2019’s report card expands, for the first time, to cover the fossil fuel sector as a whole.

This year’s report card also dived deep into lending to shale oil and gas companies for the first time, finding that Wells Fargo and JPMorgan Chase “are the biggest bankers of fracking overall — and, in particular, they support key companies active in the Permian Basin, the epicenter of the climate-threatening global surge of oil and gas production.”

“Coal mining finance is dominated by the four major Chinese banks, led by China Construction Bank and Bank of China,” the 2019 report found, adding that Bank of China provided the most financing to coal power projects as well.

On March 19, China’s State Development & Investment Corp., listed as one of the report’s top coal power companies, reportedly confirmed that it would stop investing in thermal coal power plants three years ahead of schedule.

“Since the Paris Agreement, JPMorgan Chase has provided 6 billion in finance for fossil fuels,” the groups wrote, “10 percent of all fossil fuel finance from the 33 major global banks.”

In 2017, JPMorgan Chase pledged to “facilitate 0 billon in clean financing through 2025,” adding that it had helped finance billion of wind, solar, and geothermal projects between 2003 and 2017.

Barclays, which offered a total of 9 billion for fossil fuel projects, topped the 2019 report’s list of “worst in Europe,” followed by HSBC, with billion in financing.

That’s despite the fact that Article 2 of the Paris agreement calls for “[m]aking finance flows consistent with a pathway towards low greenhouse gas emissions and climate-resilient development” — and in the run-up to Paris, major banks positioned themselves as supporting a strong global response to climate change.

“Scientific research finds that an increasing concentration of greenhouse gases in our atmosphere is warming the planet, posing significant risks to the prosperity and growth of the global economy,” JPMorgan Chase Bank, Bank of America Corp., Wells Fargo, Citibank, Goldman Sachs and Morgan Stanley wrote in a 2015 statement. “As major financial institutions, working with clients and customers around the globe, we have the business opportunity to build a more sustainable, low-carbon economy and the ability to help manage and mitigate these climate-related risks.”

In 2017, JPMorgan CEO Jamie Dimon told CNBC that he opposed President Trump’s plan to pull the U.S. out of the Paris Agreement. 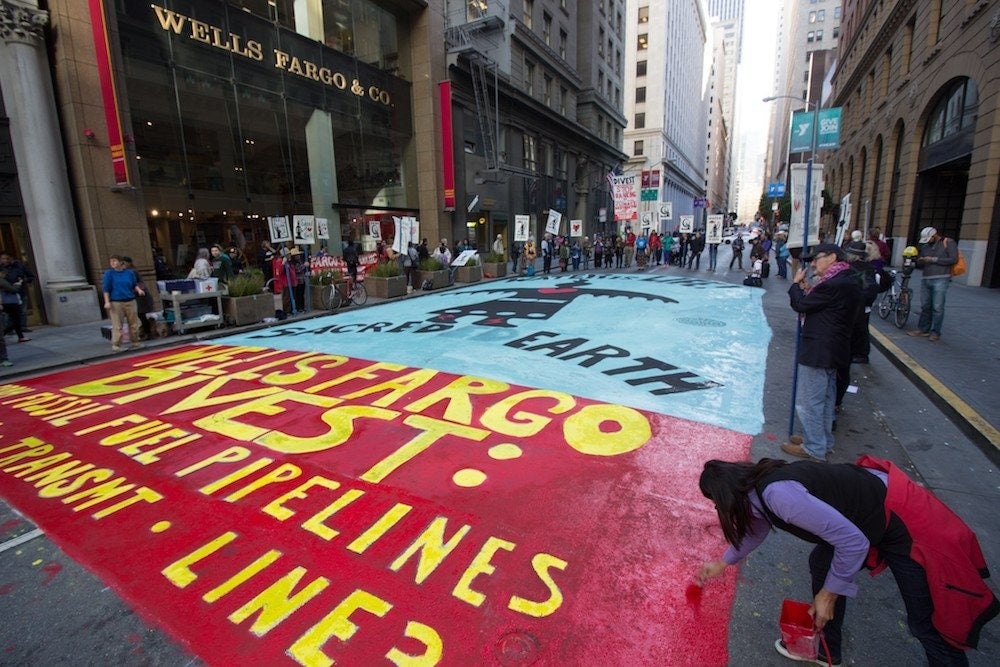 Activist pressure campaigns focused on individual banks have recently claimed successes. This week, JPMorgan Chase and Wells Fargo both announced plans to stop financing private prisons, which Moody’s Investment Services said in a comment “builds on the trend of negative publicity and uncertainty prevalent in the sector.”

The past year has brought increasing awareness of climate-related risks in some financial circles — but banks headquartered in the U.S. and Canada have lagged behind.

“According to a survey conducted by Boston Common Asset Management in 2018, European banks are far ahead of large banks in the U.S. and Canada in implementing climate-related risk assessments,” American Banker reported in January. “Specifically, 80 percent of European banks surveyed are, in some way, stress-testing their loan and investment portfolios for a 2-degree-Celsius increase in global temperatures, versus just 44 percent of banks in North America.”

A report issued last month by U.S.-based Morgan Stanley tallied 0 billion in climate-related disasters over the past three years — and predicted trillion in damages worldwide by 2040, citing figures from the UN. “We expect the physical risks of climate change to become an increasingly important part of the investment debate for 2019,” the Morgan Stanley strategists wrote.

The Banking on Climate Change report finds that nonetheless, Morgan Stanley offered fossil fuel companies .48 billion in financing in 2018 (down from .7 billion the prior year), making it the world’s 11th largest financier of fossil fuel projects.

“Alarming is an understatement,” said lead author Alison Kirsch, a Rainforest Action Network researcher. “This report is a red alert.”