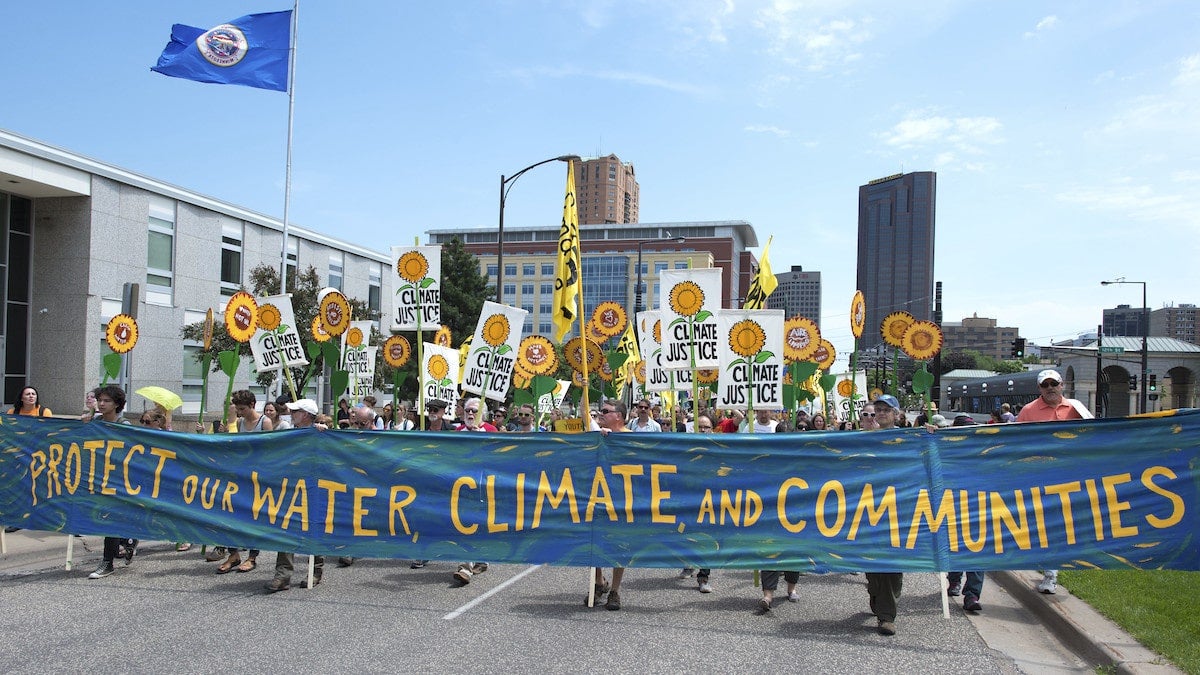 A group of Indigenous women and their allies on Monday urged the heads of major global financial institutions to stop propping up the tar sands industry and sever all ties with the sector’s “climate-wrecking pipelines, as well as the massively destructive extraction projects that feed them.”

The demand to the CEOs comes in an open letter signed by more than 40 Indigenous leaders including Rebecca Adamson, Cherokee and founder of First Nations and First Peoples Worldwide; Tara Houska, Couchiching First Nation and founder of the Giniw Collective; and Winona LaDuke, White Earth Nation and executive director of Honor the Earth.

Supporting the call is a diverse group of over 150 organizations such as Another Gulf Is Possible Collaborative, Global Exchange, and Indigenous Environmental Network.

“It’s time to move on. The most destructive and expensive oil in the world needs to stay in the ground,” LaDuke said in a statement.

“Tar sands is one of the most carbon-intensive, expensive extraction processes in the industry, and these pipelines are likely to be stranded assets soon after they are built,” the women wrote, referring to a scenario in which fossil fuels will have to stay in the ground.

The letter zeroes in on three specific pipelines as pivotal to future tar sands extraction — TC Energy’s Keystone XL pipeline, Enbridge’s Line 3 pipeline, and the Canadian government-owned Trans Mountain pipeline — each of which has faced sustained opposition. The economic impact of such opposition can’t be denied, with the letter pointing to the ” billion in mining assets lost due to operations being tied up or shut down by community protests” in 2018.

What’s more, the Indigenous leaders wrote, the “risk portfolio for extractive and land-based companies show[s] that 73% of company risk and delays are non-technical. Non-technical means community protests and boycotts that result in operational delays or shutdowns.”

Should the CEOs fail to heed the demands laid out in the letter, further delays ought to be expected. “We will continue to resist the remaining proposed projects and hold the financial backers of these companies accountable,” the letter states.

While the ecological harm of tar sands extraction and infrastructure has been repeatedly noted by fossil fuel critics, the letter points to new threats brought by the coronavirus crisis. The signatories point to the multiple work sites in Alberta that have seen outbreaks of COVID-19 as extremely bad news for Indigenous communities who “are uniquely vulnerable to the virus’ spread due to historically underfunded healthcare programs and significant health disparities.”

Indigenous women in these rural areas are in peril. There is growing evidence that the epidemic of missing and murdered Indigenous women (MMIW) is directly linked to fossil fuel production. Workers relocate to construction sites to build pipelines, creating temporary housing communities known as “man camps” near the pipeline route, which is oftentimes on or next to tribal nation lands. Studies, reports, and Congressional hearings have found that man camps lead to increased rates of sexual violence and sexual trafficking.

“We need a just transition to renewable, sustainable energy, not expansion of fossil fuel extraction,” the signatories declare. “We demand respect for our rights and sovereignty as Indigenous Peoples so that we can control our own lands, futures, and job opportunities.”

The letter lays out a way forward for the financial institutions.

“Rather than exploit the tar sands sector for its last drops of profit in the face of climate crisis and disregard the health and safety of communities along pipeline routes, your company can accelerate a just transition for Indigenous nations, communities, and workers that depend on the industry for their livelihoods by publicly ruling out involvement in these tar sands projects and redirecting your insurance underwriting to communities and renewable, clean energy,” the women wrote.

According to Joye Braun, Cheyenne River Sioux, organizer with Indigenous Environmental Network, the tar sands industry has been “nothing more than evil incarnate.”

“We must put a stop to them,” said Braun. “We must stand and say enough is enough. Join us in saving our future. Join us putting the proverbial nail in the coffin of these dying, unneeded industries.”