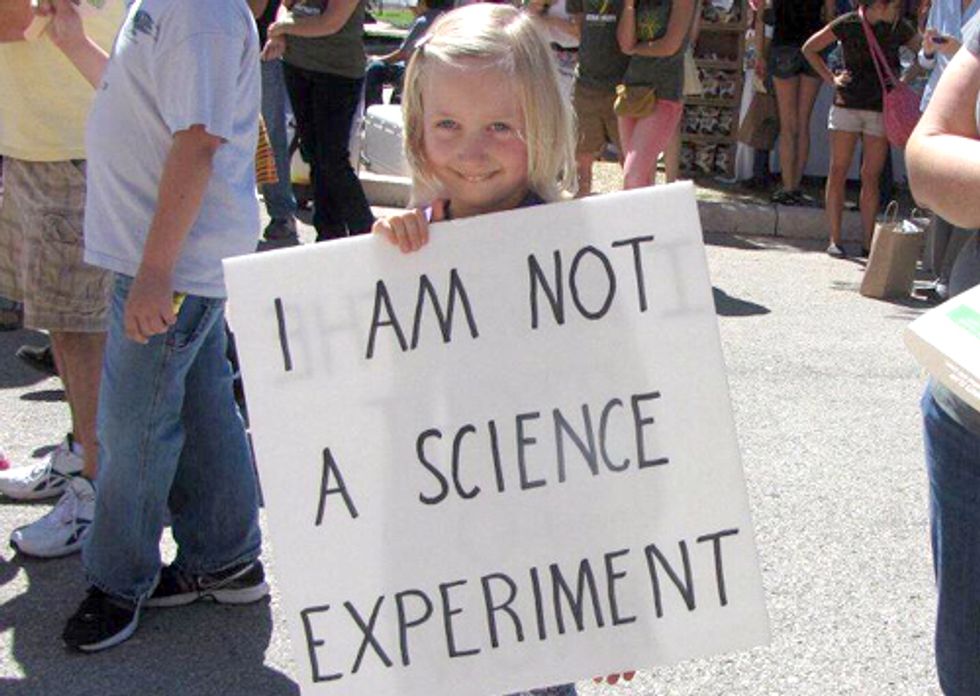 Earlier this week, 55 Members of Congress signed on to a letter that calls on U.S. Food and Drug Administration (FDA) Commissioner Margaret Hamburg, M.D. to require the labeling of genetically engineered (GE) food. The bicameral letter, led by Sen. Barbara Boxer (D-CA) and Representative Peter DeFazio (D-OR), was written in support of a legal petition filed by the Center for Food Safety (CFS) on behalf of the Just Label It campaign and its nearly 400 partner organizations and businesses, including Beyond Pesticides. So far, more than 950,000 people have submitted comments in support of labeling since CFS filed the legal petition in October 2011.

The campaign also recently launched a new infographic, (pictured to the right) which visually explains why FDA should Just Label It. It is designed to clearly show the need for labeling of GE foods, and is convenient for sharing on-line and via social media.

Meanwhile, on the West coast, The California Right to Know Initiative Campaign is also gaining momentum with its signature gathering efforts across the state to place a voter backed initiative on the November 2012 ballot that would mandate labeling of genetically engineered food. The effort is supported by a broad coalition of public health, family, environmental organizations, farmers and individuals. So far, thousands of energized volunteers have been collecting signatures to qualify the petition for the ballot since mid-February across the state.

The Congressional letter to FDA states:

“At issue is the fundamental right consumers have to make informed choices about the food they eat…The agency currently requires over 3,000 other ingredients, additives, and processes to be labeled; providing basic information doesn’t confuse the public, it empowers them to make choices. Absent labeling, Americans are unable to choose for themselves whether to purchase GE foods…. We urge you to fully review the facts, law, and science, and side with the American public by requiring the labeling of genetically engineered foods as is done in nearly 50 countries throughout the world.”

In the U.S. there is overwhelming public demand—consistently near 95%—for the labeling of GE foods. The U.S. policy of not requiring GE labeling makes it a stark outlier among developed and developing nations. Nearly 50 countries have mandatory labeling policies for GE foods including South Korea, Japan, the United Kingdom, Brazil, China, Australia, New Zealand, the entire European Union, and many others.

In its 1992 policy statement, FDA allowed GE foods to be marketed without labeling on the basis that they were not “materially” different from other foods. However, the agency severely limited what it considered “material” by targeting only changes in food that could be recognized by taste, smell, or other senses –applying 19th century science to the regulation of 21st century food technologies. The outdated standard has no legal basis in the statute and was adopted by FDA despite a lack of scientific studies or data to support the assumption that GE foods are not materially different from conventional foods.

Beyond Pesticides’ goal is to push for labeling as a means of identifying products containing GE ingredients and allow for consumer choice that will drive the market toward sustainable practices. The European Union, Japan, Australia, Brazil, Russia, and China require labeling for GE foods. Recently, the German corporation BASF announced that it would stop developing genetically engineered products targeting the European market, in part due to low consumer demand. Given that about 95 percent of Americans support mandatory labeling of GE foods, Beyond Pesticides believes that we can have the same impact in the U.S. as in Europe.

The best way to avoid genetically engineered foods in the marketplace is by purchasing foods that have the U.S. Department of Agriculture (USDA) Certified Organic Seal. Under organic certification standards, genetically modified organisms and their byproducts are prohibited. For many other reasons, organic products are the right choice for consumers; however, the current lax regulations on GE crops in the U.S. present a unique risk to organic growers. Wind-pollinated and bee-pollinated crops, such as corn and alfalfa, have high risks of cross pollination between GE crops and unmodified varieties. For more information on genetically engineered food, please see Beyond Pesticides’ Genetic Engineering program page.

In California: In order to get The Right to Know Genetically Engineered Food Act on the ballot in California in 2012, organizers need to collect signatures from 800,000 California voters. Sign up to get involved in our signature gathering efforts and learn more about the campaign at www.carighttoknow.org.