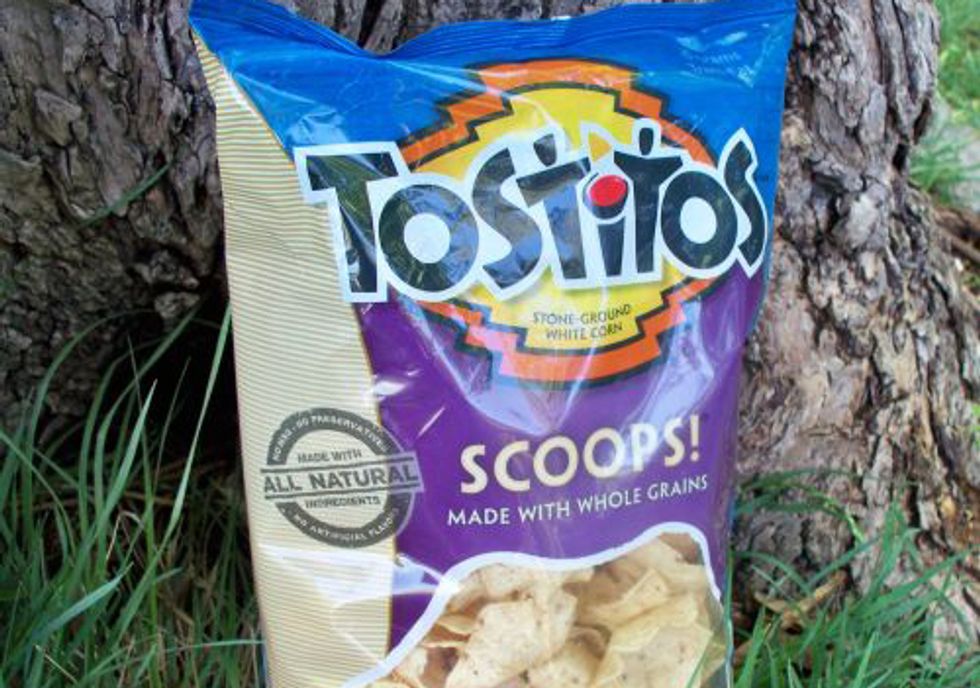 Less than a year after Frito-Lay announced plans to make half their products without “any artificial or synthetic ingredients,” the $13 billion company was sued last week in federal court for fraudulently marketing the snacks that contain genetically modified ingredients.

In its April 2011 Seed-to-Shelf disclosure campaign, Frito-Lay promised to inform consumers about each individual snack’s ingredients, even setting up an app for smartphone users to swipe the product’s barcode and read about it. Ann Mukherjee, Frito-Lay’s senior vice president and chief marketing officer, said, "What better way to share the story behind Frito-Lay snacks than by giving consumers a look inside our Flavor Kitchen to see first-hand the all natural ingredients and real foods that inspire the products we make?”

Real foods? All natural? Even Monsanto defines genetically modified organisms as unnatural, which the lawsuit quoted, “Genetically Modified Organisms (GMO)—plants or animals that have had their genetic makeup altered to exhibit traits that are not naturally theirs.”

The World Health Organization agrees, defining GMOs as “organisms in which the genetic material (DNA) has been altered in a way that does not occur naturally.”

The lawsuit names only one plaintiff, Julie Gengo of Richmond, California, but includes all those who purchased Frito’s products which bear the “ALL NATURAL” label. Last August, the law firm Milberg LLP invited potential litigants to contact them.

Though Gengo holds a Bachelor of Science in electrical engineering, she earns a living as an independent marketer for such organizations as Berkeley Playhouse/Julia Morgan Center for the Arts, Vital Systems, Bay Area Green Tours, Oxfam America and Slow Money Northern California. She describes herself as “an ongoing environmental, and healthy foods advocate.”

In early 2009, she wrote Genetically Modified (GM) Foods‚ Another Reason to Buy Organic, warning people that Frito-Lay uses GMOs. According to the complaint, since 2007, she regularly bought the company’s Tostitos and Sun Chips believing they were “all natural” as indicated in advertising and on the package.

On Dec. 20, Frito’s Naturally Delicious webpage still boasted: “All Frito-Lay snack chips made with natural ingredients start with all-natural corn or potatoes and healthier oils. For our flavored LAY’S®, TOSTITOS® and SUNCHIPS® products, we are using all natural seasonings that don’t have artificial or synthetic ingredients.”

Based in New York City and specializing in class-action lawsuits on behalf of investors and consumers, Milberg LLP also has offices in Los Angeles, Tampa and Detroit. Founded in 1965, the firm now employs about 75 attorneys.

After two successful class action suits against military contractors Raytheon and General Electric, in 2006 Milberg was the target of a criminal probe by the U.S. Department of Justice (DOJ). The firm and some of its partners were indicted on 20 criminal counts including bribery, racketeering and fraud. The DOJ press release alleges the firm participated “in a scheme in which several individuals were paid millions of dollars in secret kickbacks in exchange for serving as named plaintiffs in more than 150 class-action and shareholder derivative-action lawsuits.”

Four of Milberg LLP’s partners served time in prison, and the firm paid $75 million in fines before the DOJ dropped the matter, reports Wikipedia.

Frito-Lay North America is a wholly-owned subsidiary of PepsiCo, Inc. Though Pepsi uses genetically modified sweeteners (high fructose corn syrup) in its soft drinks, it does not label them for U.S. consumers, adhering to the U.S. regulator policy of hiding GMOs from the public.