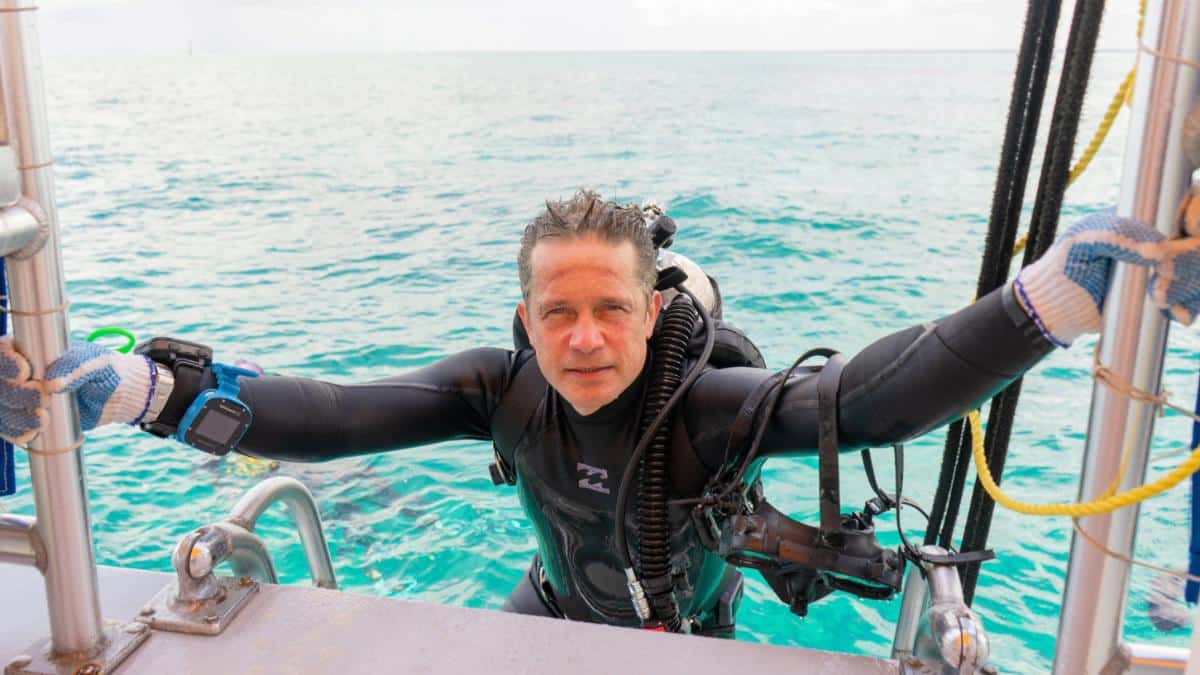 EcoWatch joins Fabien Cousteau to remove marine debris in the Florida Keys and talk about the future of the oceans. Tiffany Duong / Ocean Rebels

Much of what we’ve been able to learn about the underwater world has built on the legacy of underwater explorer and pioneer Jacques Yves Cousteau. In 1943, Cousteau invented the aqua-lung, which completed his self-contained underwater breathing apparatus (SCUBA). This technology forever changed how humans interact with the blue world and remains the precursor of modern-day scuba diving equipment.

Cousteau’s eldest grandson, Fabien, was born to continue his grandfather’s legacy. Fabien learned to scuba dive on his fourth birthday and joined his famous grandfather on his legendary ships, the Calypso and Alcyone. Now, the younger Cousteau is following in his grandfather’s footsteps and bubbles, taking the ocean exploration and conservation he grew up with and giving it a modern, technology-driven, community-focused revamp.

EcoWatch recently joined Fabien and members of his team at the Fabien Cousteau Ocean Learning Center (FCOLC) on marine debris cleanup dives in the Florida Keys. Funded and organized by the “Goal: Clean Seas Florida Keys” program, the program is a partnership between the Florida Keys National Marine Sanctuary, the National Marine Sanctuary Foundation and Blue Star Diving Operators, who are trained in the best practices for marine debris removal. The community-led collaboration grew out of the devastating aftermath from Hurricane Irma in Sept. 2017, which displaced approximately 154,000 lobster traps, many of which were dragged across sensitive ocean habitats for up to 15 miles. In its first year alone, trained operators helped remove more than 10,000 pounds of marine debris from sanctuary waters. Now in its third year, the program teamed up with locals from the Florida Keys and the FCOLC team to spread ocean awareness and remove traps from local coral reefs. 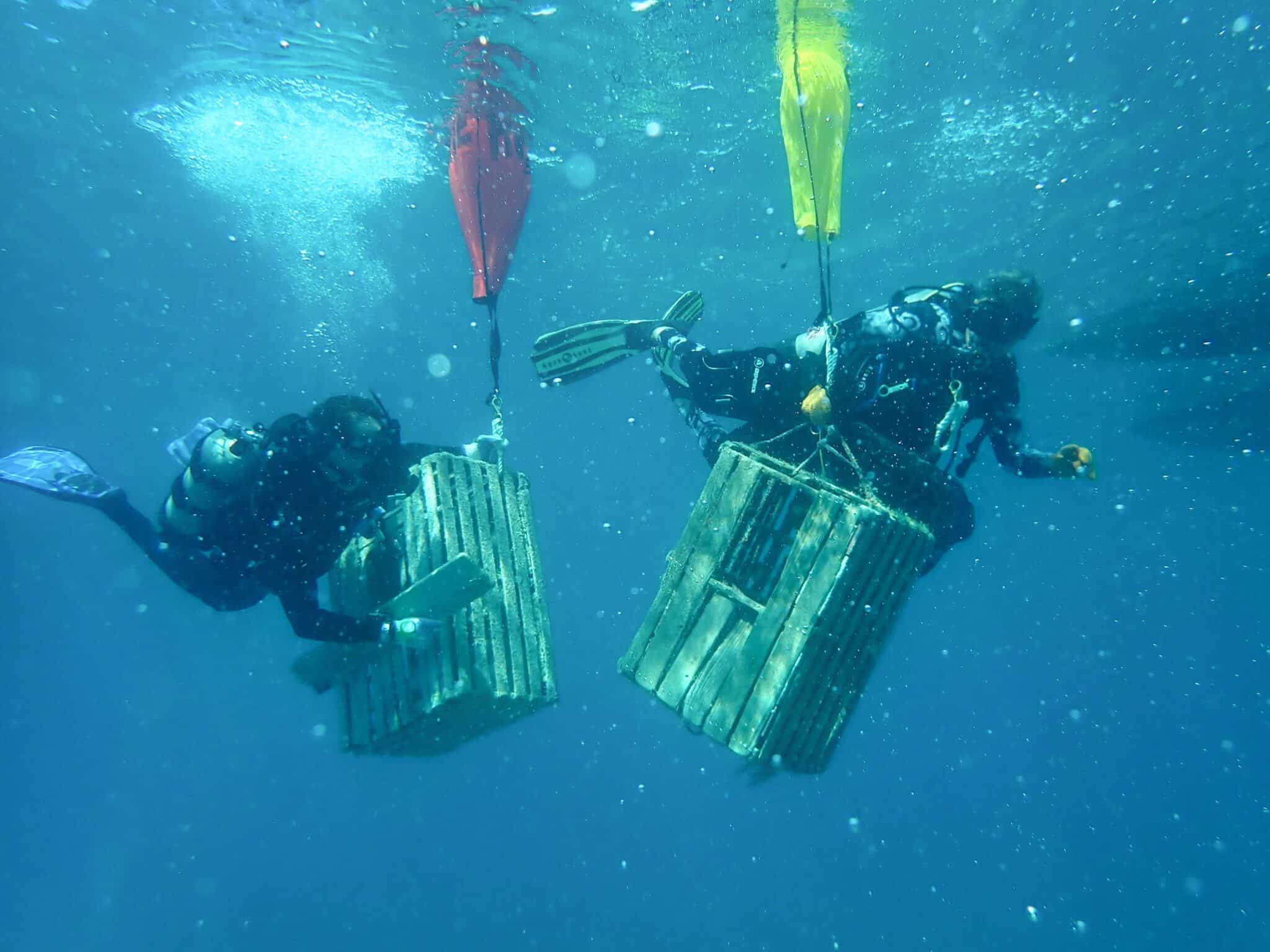 During a clean-up dive, Fabien Cousteau and Jesus Gudino use lift bags to bring derelict lobster traps up from the seafloor. Tiffany Duong / Ocean Rebels

While helping the environment, EcoWatch took the opportunity to interview aquanaut and ocean conservationist Fabien about all things ocean. 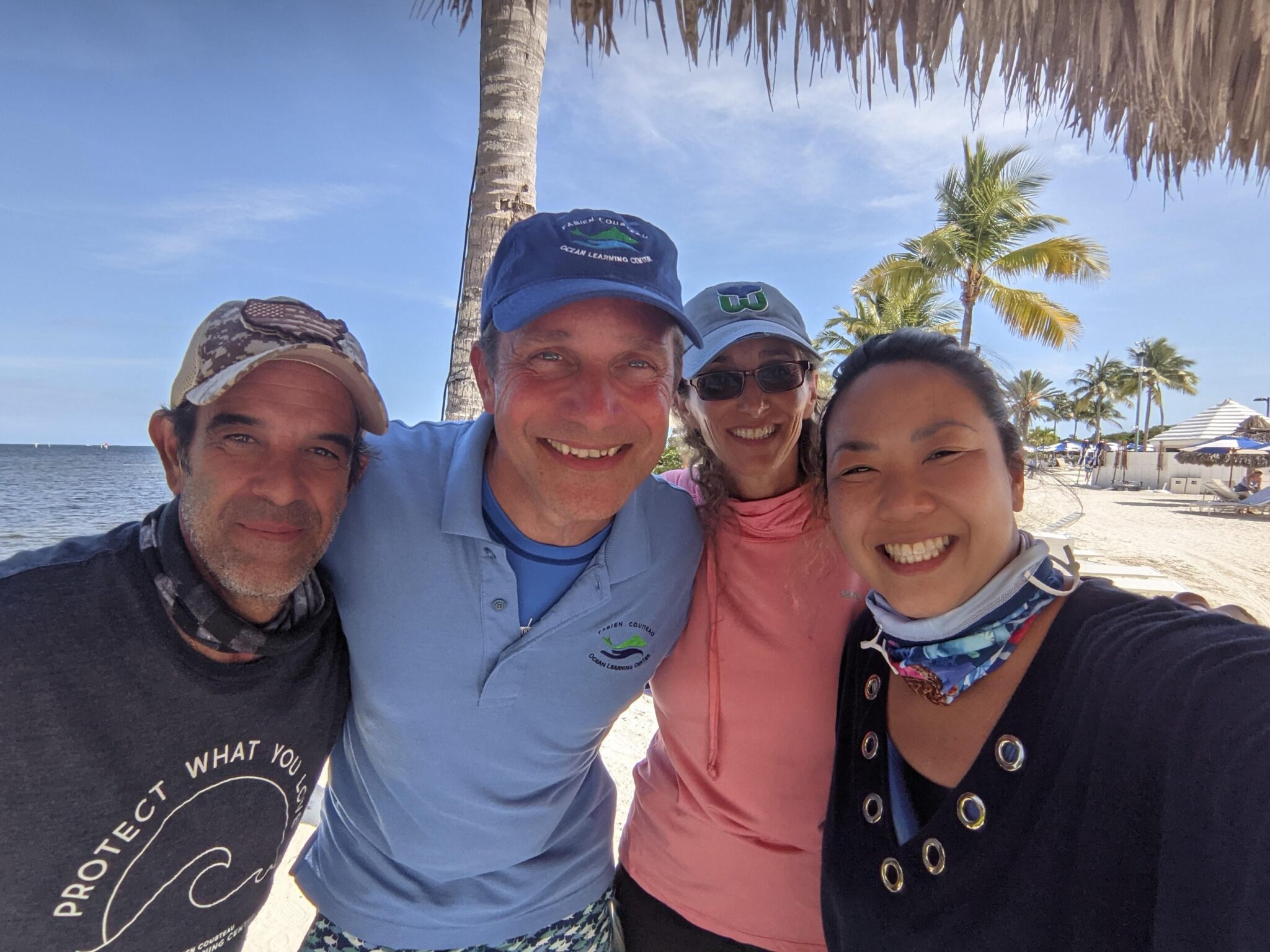 Tiffany Duong (EcoWatch): First, how much debris did we take off the reefs today? 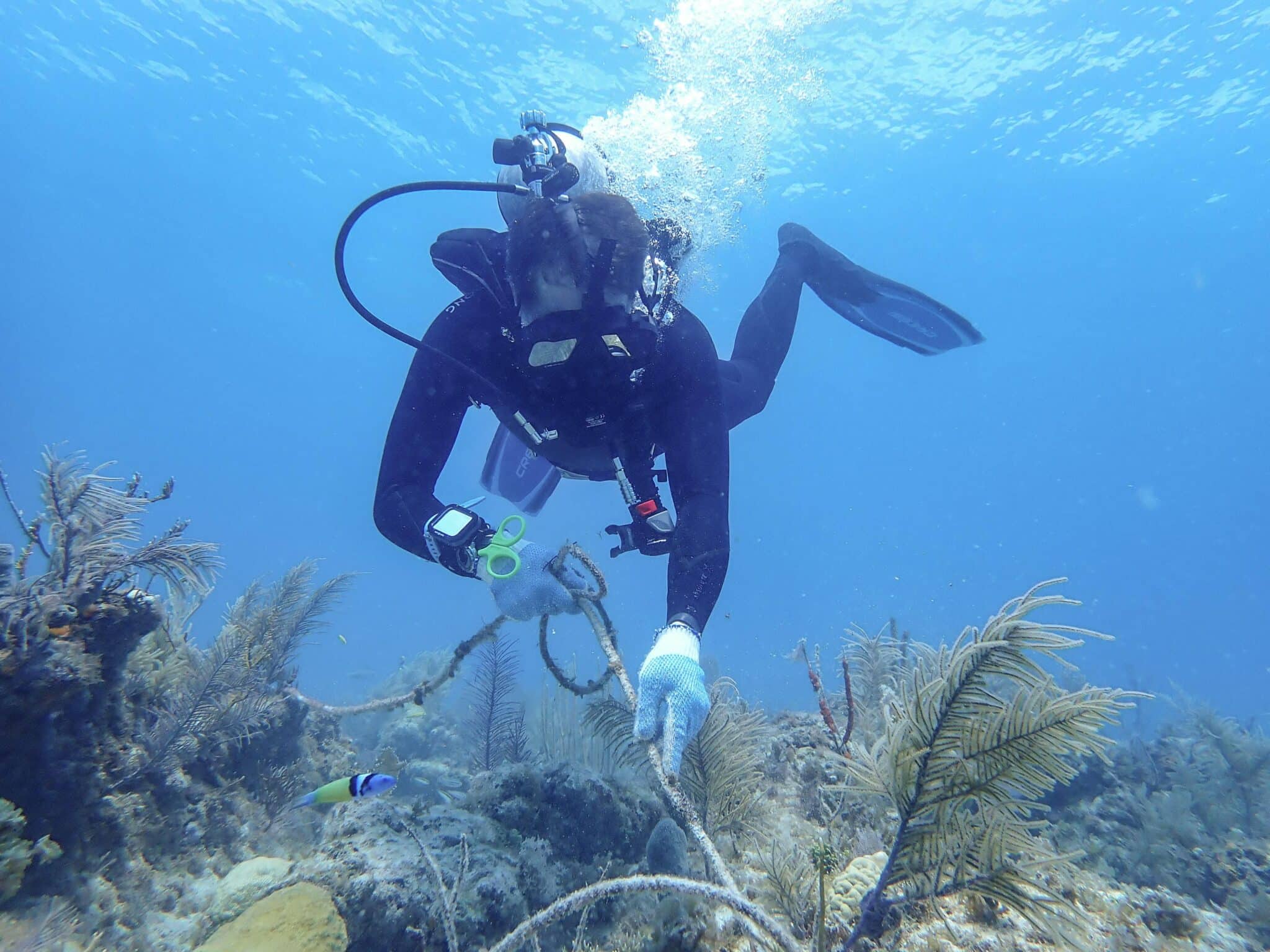 EW: Why oceans? What’s the appeal?

FC: When one has experienced the ocean world, it’s impossible to turn your back on it. It’s a privilege and a responsibility to share the adventure and the passion with other… And, I love it. I’m addicted to oceans.

EW: What is your favorite thing about the oceans?

EW: How do you remember your grandfather?

FC: I had the luck of spending the first 30 years of my life with my grandfather around. For years, maybe the first decade and a half, I just saw him as my grandfather. We would see him in family gatherings, whether in the field or at home. He would tell us stories. He would be how I imagine most grandparents are — very interested in their grandchildren and spending time with them. It wasn’t until we were in a Japanese restaurant in New York City one day and people kept coming up to our table to interrupt our family time asking for him to sign things that I realized our grandfather wasn’t just for us. We were sharing him with the world. And that’s when I realized — very naïve of me — what an iconic public figure he was, especially for the ocean world. 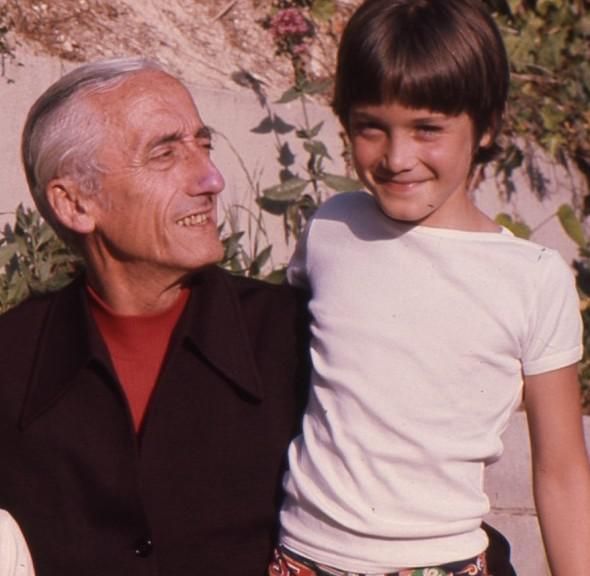 EW: Why should others care about the oceans?

FC: Without the oceans, we’re a brown rock in space like all the others. The oceans set our planet apart and allow us to survive and thrive. We share the planet with all kinds of sentient beings. To envision a better future, we have to live in symbiosis with all of them.

EW: What’s the current state of the planet?

FC: We’re facing a terminal illness if we don’t do something. It’s not trite to say that… As a species, we are directly responsible for our very own future. We’re the only species that can do that, that can determine its own future. And that’s the most fundamentally important thing everyone needs to understand. 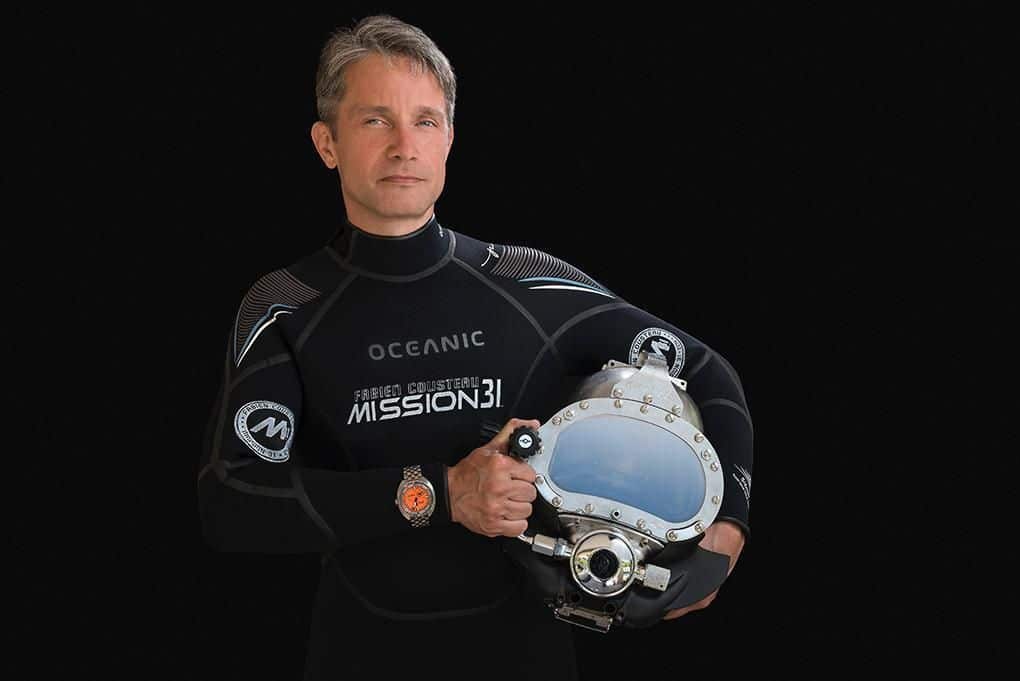 EW: You’re not just taking this sitting down. Tell us about the Fabien Cousteau Ocean Learning Center and what you’re trying to do.

FC: The mission is to educate, empower and engage. It’s based on a quote my grandpa told me as a kid: People protect what they love, they love what they understand, and they understand what they’re taught. The only way we’re getting out of this is if we fill the proverbial bucket together one drop at a time — one action at a time. We’re all responsible for what we see today, so the solution isn’t from one source like myself or an individual doing their best, it’s all of us pitching in.

EW: What does that look like for you and FCOLC?

FC: We all need to do our part and invest in ocean protection, conservation and science. Our Nicaragua program is a great example of all three.

Pamela Fletcher: Our biggest success is the shift we’re seeing in how [the girls helping with the sea turtle program] value themselves in the community and value protecting these amazing species.

Martín Molina Castellnon: In Nicaragua, these things are all managed by men, and we transitioned them to be women. It’s taken off like a rocket. One little girl who’s only eight years old has been in the program for two years, and she collects plastics, brings them to school and tells her friends about what’s happening in the oceans. She’s our future pioneer.

MMC: Women empowerment has really changed their lives. And, it’s made a big difference in the community. 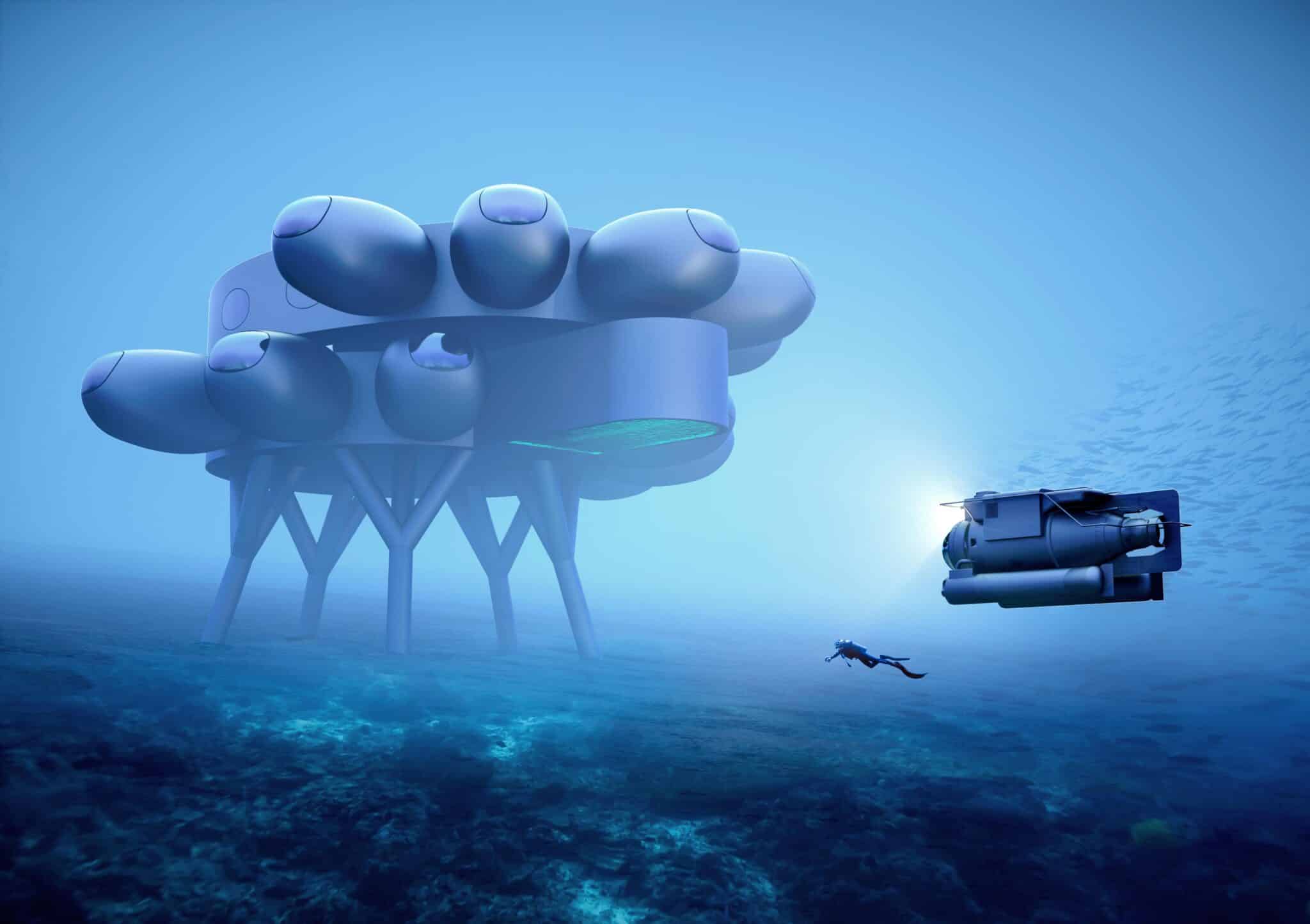 Proteus is a new prototype underwater research station that could revolutionize how research is conducted and what it can uncover. Yves Béhar / Fuseproject

EW: Now, tell me about Proteus.

(Editorial Note: Proteus is a conceptual underwater research station that Fabien hopes will change how underwater research is tackled. It will be the world’s largest and most advanced underwater habitat located 60 feet below the surface in Curaçao. The goal is for it to be completely modular and customizable, run by renewable energy and filled with cutting-edge technology.)

FC: This is a very large project. Proteus will be like the International Space Station of the sea. That was by design, and it’s meant to give people that image because a lot of science will be coming out of it. Educational components and broadcasting will be for the social good, for the benefit of humanity and the planet. Underwater habitats are the missing tool in underwater exploration. It doesn’t take away from ships, ROVs, probes, scuba, etc. — it’s something that fills a big gap we currently have.

EW: What gives you hope?

FC: What’s exciting to me is that we know so little about the oceans. We’ve explored only five percent. That’s a huge opportunity. But, we also need to understand we’re having a huge impact on our oceans, too. We’re treating it as a garbage can, but really, it’s a closed-loop system that we’re banking on. Now, that bank account is going bankrupt, so we need to fill it back up.

EW: Any advice to those reading?

FC: Protect the ocean as if your life depended on it — because it does. 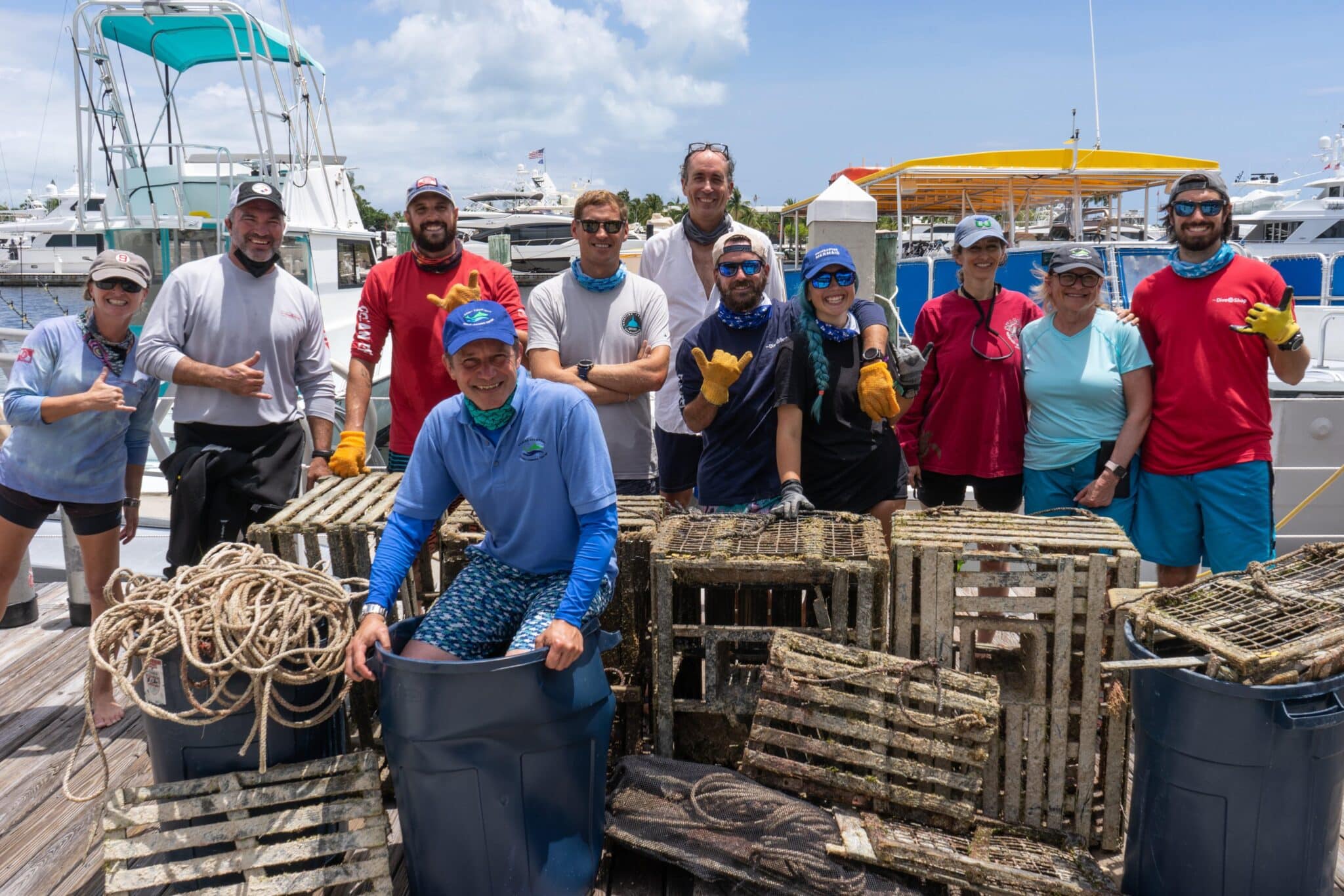 Locals joined Fabien Cousteau and his team from the FCOLC for a marine debris cleanup dive in the Florida Keys. Tiffany Duong / Ocean Rebels