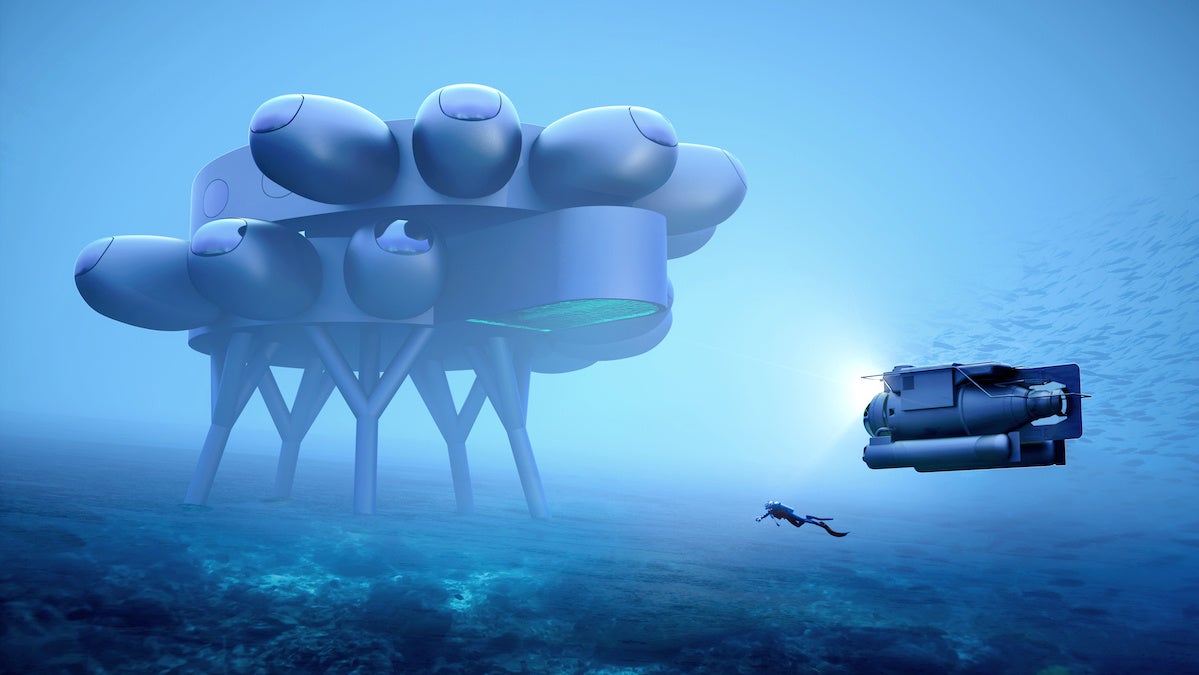 Proteus is a new prototype underwater research station that could revolutionize how research is conducted and what it can uncover. Yves Béhar / Fuseproject

Sixty feet below the surface of the Caribbean Sea, off the coast of Curaçao, aquanaut Fabien Cousteau and industrial designer Yves Behar want to build the world’s largest underwater research station and habitat. It could forever change how underwater research is done.

It will house up to 12 scientists and researchers from across the globe at one time and is intended to be an underwater version of the International Space Station (ISS). Government agencies, scientists and the private sector will be able to collaborate “in the spirit of collective knowledge, irrespective of borders” to explore and research everything from new medicinal discoveries to food sustainability to the effects of climate change, reported CNN and a press release from Cousteau’s Ocean Learning Center (FCOLC).

“As our life support system, the Ocean is indispensable to solving the planet’s biggest problems. Challenges created by climate change, rising sea levels, extreme storms and viruses represent a multi-trillion-dollar risk to the global economy,” Cousteau said in the release. “The knowledge that will be uncovered underwater will forever change the way generations of humans live up above.”

The two-story circular, spiral structure is grounded to the ocean floor on stilts, with modular, protruding pods containing laboratories, personal quarters, medical bays and storage, said fuseproject. The largest pod contains a moon pool for divers to access the ocean floor and submersibles to dock with the underwater ISS, and all pods can be attached or detached to adapt to specific needs of the mission at hand. Proteus is powered by wind, solar and ocean thermal energy, and features the first underwater greenhouse for growing food, and wellness designs like windows for light and a ramp for exercise to make long-term underwater living more sustainable, CNN reported.

Underwater habitats allow scientists to perform continuous night and day diving without decompression between dives; they can stay underwater for days or weeks at a time, much like astronauts in the ISS, CNN reported. No longer fettered by limited oxygen supplies, dive logistics or the need to acclimate to changing pressures, scientists in Proteus should be able to complete 30 to 40 times the research than one having to continually surface would in the same time frame, Cousteau believes, reported Fast Company.

Proteus’ onsite lab will facilitate the processing of organic samples in real time, rather than specimens rapidly degrading or dying on their way to the surface, the FCOLC release noted, and could lead to cleaner data. Proteus will also house a full-scale video production facility to provide continuous live streaming for educational programs.

Innovation comes at a price: 5 million, according to Fast Company.

Right now, the project is in the concept stage. If Cousteau can secure the funding, it will take three years before Proteus is installed, reported CNN.

“Like all big dreams, it will need further development,” Béhar told Fast Company. “But one of the ways we’ve done fundraising in the last few months is by sharing this concept and sharing this dream.”

Though oceans cover 71% of the world’s surface, NOAA estimates that humans have only explored about 5% and mapped less than 20%, reported CNN. Cousteau hopes Proteus will change that.

“Ocean exploration is 1,000 times more important than space exploration for — selfishly — our survival, for our trajectory into the future,” Cousteau said, reported CNN. “It’s our life support system. It is the very reason why we exist in the first place.”