Under Trump, EPA Workers Seek Bill of Rights to Allow Them to Protect the Environment and Public Health 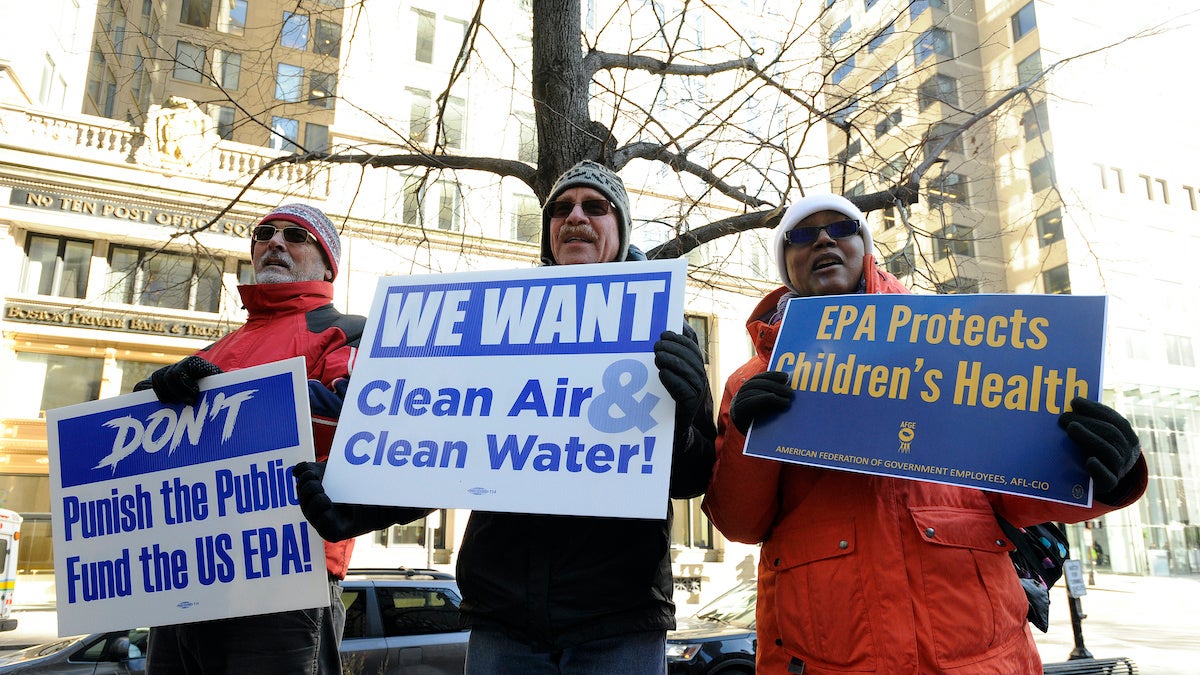 The American Federation of Government Employees organized a rally calling for an end to the government shutdown near the headquarters for the EPA and IRS in Boston on Jan. 11, 2019. JOSEPH PREZIOSO / AFP via Getty Images

The union representing the U.S. Environmental Protection Agency (EPA) workers began negotiating a new contract with the agency Tuesday. But the workers are not just fighting for a fair contract or better working conditions. They are also fighting for the ability to do their jobs in an administration hostile to science and environmental regulations.

The EPA workers, represented by the American Federation of Government Employees (AFGE), have put forward a Bill of Rights that includes the right to scientific integrity, the right to enforce environmental laws and the right to help solve, research and discuss the climate crisis.

“EPA employees have committed our careers to protecting human health and the environment, working day-in and day-out to keep our air clean, ensure our water is safe to drink, and clean up our land so that we may live and work on it,” AFGE Local 1236 President Bethany Dreyfus said in a statement reported by The Hill. “Yet time and time again, the Administration has attempted to silence research and gut our labor rights. That’s why we’re not just standing up for a fair contract, we’re fighting to be able to do our jobs and protect public health — and we’ll keep fighting until our voices are truly heard.”

We are launching the EPA Workers Bill of Rights to #ProtectEPA. Join us in standing up for the environment at https://t.co/LiHcK921yf pic.twitter.com/55DPKyyikX

The Bill of Rights comes in response to the Trump administration‘s sidelining of science and commitment to environmental rollbacks. The AFGE pointed to a December 2019 New York Times article that detailed how the administration was cutting funding for research projects, pressuring some researchers not to speak publicly and relying less on science when making regulations. It has gotten so bad that even the EPA Science Advisory Board stuffed with Trump appointees said three major Trump-era policies ran counter to sound science. In particular, the board called out rollbacks of Obama-era water protections and emissions standards for cars and light trucks, as well as a rule limiting the kinds of studies that can be used to draft public health regulations.

All of this sidelining and deregulation has impacted morale at the EPA and even caused some people to leave. The New York Times cited the case of Matthew Davis, a biologist who left the EPA after 10 years. Davis’ research on how mercury impacts children’s health had been used to bolster rules limiting mercury pollution from coal fired plants, but he was then asked to help justify the rollback of those same regulations.

“I am now part of defending this darker, dirtier future,” he told The New York Times.

Marie Owens Powell, who works for the EPA in Philadelphia as an underground storage tank enforcement officer, told HuffPost she planned to deliver the Bill of Rights to the agency with other staffers so that workers would not feel so disempowered and demoralized.

“We needed some kind of vehicle … so these employees would feel like they had a voice,” Powell told HuffPost. “As an employee for the past 27 years, I’ve never seen staffing levels cut this much, research stalled and morale at an all-time low.”

The union, which represents 7,500 EPA workers, is also demanding more conventional labor rights. The negotiations come after the agency unilaterally imposed a contract in the summer that decreased employees’ chances to work remotely and kicked union officials out of their offices.

The Federal Labor Relations Authority eventually agreed with the union that the government had bargained in bad faith by imposing the contract, according to HuffPost.

“… Donald Trump took away many of those rights guaranteed under our collectively bargained contract and imposed … a unilateral anti-employee directive,” EPA scientist Loreen Targos said, according to The Chicago Sun-Times. “We fought for six months for a seat at the table to win back our rights that were taken away.”

The full Bill of Rights proposed by the union is as follows:

In response, the EPA claimed it already promoted scientific integrity.

“EPA has established, and continues to promote, a culture of scientific integrity for all of its employees. This policy provides a framework intended to ensure scientific integrity throughout the EPA and promote scientific and ethical standards. The policy allows for perceived misconduct to be reported for investigation,” an agency spokesperson said in a statement to The Hill. “Additionally, EPA and AFGE are returning to the bargaining table today and will be negotiating a number of articles, which include both Employee’s rights and Union’s rights.”

However, a union survey of EPA workers found that 90 percent of them do not trust the agency to bargain in good faith, HuffPost reported.