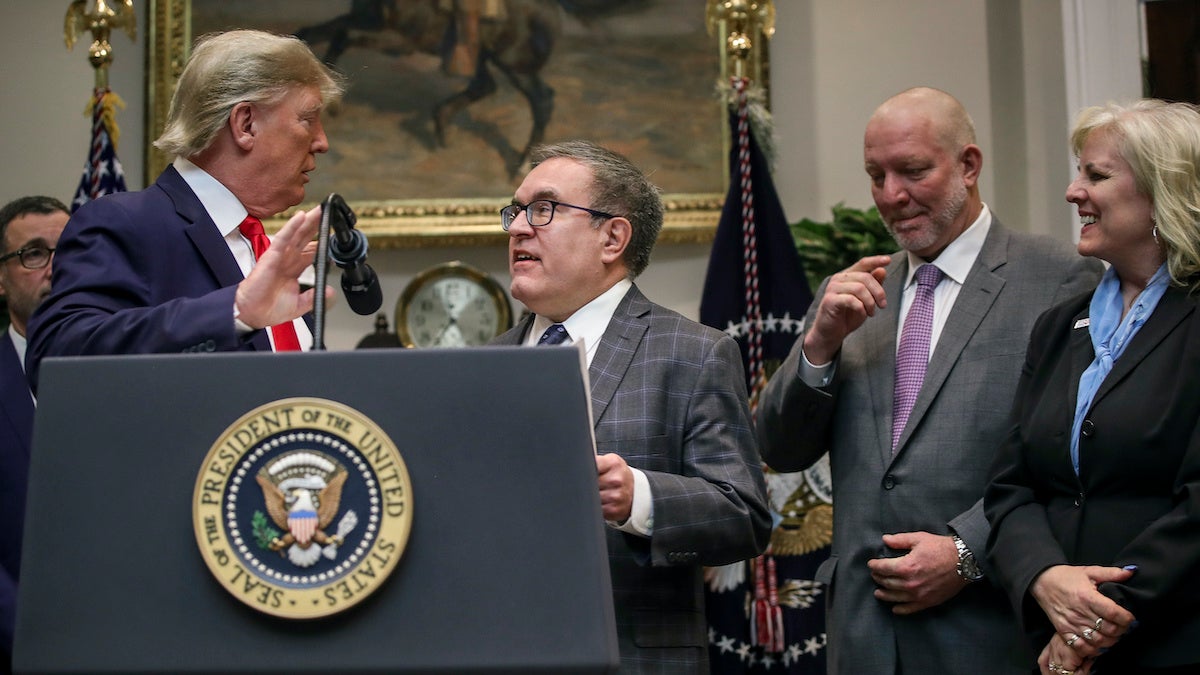 Trump introduces EPA Administrator Andrew Wheeler during an event to announce changes to the National Environmental Policy Act, in the Roosevelt Room of the White House on Jan. 9, 2020 in Washington, DC. The changes would make it easier for federal agencies to approve infrastructure projects without considering climate change. Drew Angerer / Getty Images

A report scheduled for release later Tuesday by Congress’ non-partisan Government Accountability Office (GAO) finds that the Trump administration undervalues the costs of the climate crisis in order to push deregulation and rollbacks of environmental protections, according to The New York Times.

In one example, the administration estimated the cost of global heating for future generations seven times lower than previous federal estimates. By drastically lowering that number, which is known as the “social cost of the carbon,” the administration could manipulate its cost-benefit analyses for deregulating carbon emissions, as The New York Times reported.

Every ton of carbon dioxide released into the atmosphere imposes a cost on the economy, since it increases the likelihood from damage to infrastructure from sea level rise, heat waves or storms. Or, it imposes a health care cost as increased pollution harms public health. However, calculating the cost of those effects is both politically contentious and economically challenging, according to The New York Times.

One of the ways the math changed was keeping in line with Trump’s narrow worldview. The report found that the administration brought the cost of carbon down by only looking at the effects on the U.S. rather than the global cost.

Another way it brought down the cost of carbon was by using something called the discount rate, which, according to The New York Times, assumes society should not pay much now to prevent harm from climate change to future generations.

The economic costs were supposed to be revised by the National Academy of Sciences, but the White House disbanded the working group and has no intention of restarting them or revising the economic calculation, as The New York Times reported.

That refusal to update their calculations means future incarnations of the federal government “may not be well positioned to ensure agencies’ future regulatory analyses are using the best available science,” according to the GAO report.

Senator Sheldon Whitehouse, a Democrat from Rhode Island and one of eight senators who requested the review, said, “Climate change is a massive threat to our economy. That threat will only grow in years to come, even if we take the action necessary to avoid the worst effects of climate change,” as The New York Times reported.

Michael Greenstone, an economist at the University of Chicago, said the Trump administration’s calculations were not done in good faith.

“It was entirely a political act. I don’t think anyone pretended that those moves were justified,” he said.

Others see similarities between the Trump administration’s handling of the coronavirus and its approach to the climate crisis: deny its reality and then leave the country unprepared for its effects.

“This really parallels the mismanagement of coronavirus,” said Michael K. Dorsey, a limited partner with IberSun, a renewable energy company, and a climate expert, to The New York Times. “There’s this belief that by doing this you will have some effect of helping the fossil fuel industry. The only thing it does, unfortunately, is undermine the ability of the government to make prudent decisions about moving critical resources to communities that are experiencing the unfolding climate crisis.”