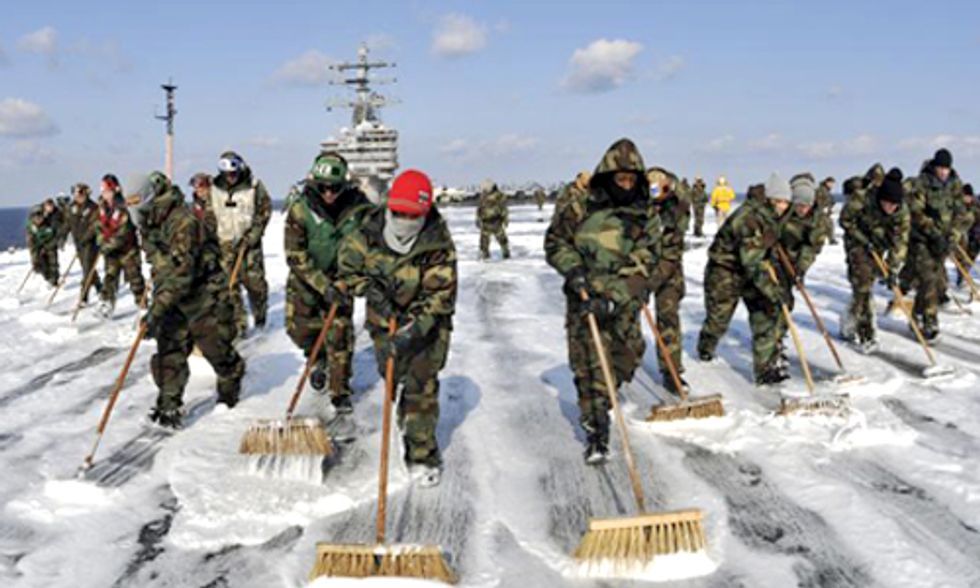 A stunning new report indicates the U.S. Navy knew that sailors from the nuclear-powered USS Ronald Reagan took major radiation hits from the Fukushima atomic power plant after its meltdowns and explosions nearly three years ago.

If true, the revelations cast new light on the $1 billion lawsuit filed by the sailors against Tokyo Electric Power. Many of the sailors are already suffering devastating health impacts, but are being stonewalled by Tepco and the Navy.
The Reagan had joined several other U.S. ships in Operation Tomodachi (“Friendship”) to aid victims of the March 11, 2011 quake and tsunami. Photographic evidence and first-person testimony confirms that on March 12, 2011 the ship was within two miles of Fukushima Dai’ichi as the reactors there began to melt and explode.
In the midst of a snow storm, deck hands were enveloped in a warm cloud that came with a metallic taste. Sailors testify that the Reagan’s 5,500-member crew was told over the ship’s intercom to avoid drinking or bathing in desalinized water drawn from a radioactive sea. The huge carrier quickly ceased its humanitarian efforts and sailed 100 miles out to sea, where newly published internal Navy communications confirm it was still taking serious doses of radioactive fallout.
Scores of sailors from the Reagan and other ships stationed nearby now report a wide range of ailments reminiscent of those documented downwind from atomic bomb tests in the Pacific and Nevada, and at Three Mile Island and Chernobyl. A similar metallic taste was described by pilots who dropped the atomic bomb on Hiroshima, and by central Pennsylvanians downwind of Three Mile Island. Some parts of the atolls downwind from the South Pacific bomb tests remain uninhabitable six decades later.
Among the 81 plaintiffs in the federal class action are a sailor who was pregnant during the mission, and her “Baby A.G.,” born that October with multiple genetic mutations.
Officially, Tepco and the Navy say the dose levels were safe.
But a stunning new report by an American scholar based in Tokyo confirms that Naval officers communicated about what they knew to be the serious irradiation of the Reagan. Written by Kyle Cleveland and published in Japan Focus, “Mobilizing Nuclear Bias” describes the interplay between the U.S. and Japanese governments as Fukushima devolved into disaster.
Cunningham writes that transcribed conversations obtained through the Freedom of Information Act feature naval officials who acknowledge that even while 100 miles away from Fukushima, the Reagan’s readings “compared to just normal background [are] about 30 times what you would detect just on a normal air sample out to sea.”
On the nuclear-powered carrier “all of our continuous monitors alarmed at the same level, at this value. And then we took portable air samples on the flight deck and got the same value,” the transcript says.

Serious fallout was also apparently found on helicopters coming back from relief missions. One unnamed U.S. government expert is quoted in the Japan Focus article as saying:

At 100 meters away it (the helicopter) was reading 4 sieverts per hour. That is an astronomical number and it told me, what that number means to me, a trained person, is there is no water on the reactor cores and they are just melting down, there is nothing containing the release of radioactivity. It is an unmitigated, unshielded number. (Confidential communication, Sept. 17, 2012).

The transcript then contains discussion of health impacts that could come within a matter of “10 hours. It’s a thyroid issue.”

Tepco and the Navy contend the Reagan did not receive a high enough dose to warrant serious concern. But Japan, South Korea and Guam deemed the carrier too radioactive to enter their ports. Stock photographs show sailors working en masse to scrub the ship down.
Sailors aboard the USS Ronald Reagan wash down the flight deck to remove potential radiation contamination while operating off the coast of Japan providing humanitarian assistance in support of Operation Tomodachi, March 22, 2011.
The $4.3 billion boat is now docked in San Diego. Critics question whether it belongs there at all. Attempts to decontaminate U.S. ships irradiated during the Pacific nuclear bombs tests from 1946-1963 proved fruitless. Hundreds of sailors were exposed to heavy doses of radiation, but some ships had to be sunk anyway.
Leaks at the Fukushima site continue to worsen. Despite its denials, Tepco recently admitted it had underestimated certain radiation releases by a factor of 500 percent. A new report indicates that particles of radioactive Cesium 134 from Fukushima have been detected in the ocean off the west coast of North America.
Global concerns continue to rise about Fukushima’s on-going crises with liquid leaks, the troubled removal of radioactive fuel rods, the search for three missing melted cores, organized crime influence at the site and much more. The flow of information has been seriously darkened by the pro-nuclear Abe Administration’s State Secrets Act, which imposes major penalties on those who might report what happens at Fukushima.
But if this new evidence holds true, it means that the Navy knew the Ronald Reagan was being plastered with serious radioactive fallout and it casts the accident in a light even more sinister than previously believed.
The stricken sailors are barred from suing the Navy, and their case against Tepco will depend on a series of complex international challenges.
But one thing is certain: neither they nor the global community have been getting anything near the full truth about Fukushima.