Roughly one-fifth of the electricity needed to power America comes from nuclear energy. Fewer than 100 reactors are licensed to operate across 30 U.S. states, with most located along the East Coast. Others are scattered across the Midwest, while a handful are sited in West Coast states. Some states, like Illinois, South Carolina and New Hampshire, receive more than half their power from nuclear energy.

These reactors — and all the equipment that accompanies them — require a sizable amount of space. According to the U.S. Department of Energy, “a typical 1,000-megawatt nuclear facility in the United States needs a little more than 1 square mile to operate.” Ideally, developers want to avoid siting a nuclear reactor anywhere that might have a propensity for natural disasters, including volcanic and seismic activity.

How does a traditional nuclear reactor work?

Nuclear reactors generate power by boiling water and using the resulting steam to rotate electricity-generating turbines. That steam is then cooled back to a liquid, which is then boiled again or returned to the original water source, like an ocean or river.

Sounds simple enough, but the heat necessary to boil water is created by splitting atoms, a complicated process known as nuclear fission, within the reactor’s uranium fuel core.

There’s another type of atomic energy: nuclear fusion. That process is essentially the reverse of nuclear fission. Instead of separating atoms, nuclear fusion seeks to force two atoms to fuse together. While recently there have been highly publicized nuclear fusion advances, no nuclear reactors work off that technology.

But nuclear power is expensive and complicated so as power grid decarbonization discussions continue, interest in new nuclear power plant development has veered away from the huge nuclear facility designs with massive, hourglass-shaped cooling towers traditionally associated with the industry, of which there is only one currently being built in the U.S. Now, the industry is turning toward significantly smaller versions: small modular reactors, or SMRs.

Numerous small modular reactor designs have emerged from developers, but only a handful have resulted in public-private partnerships with the federal government, including sodium-cooled fast reactors and molten salt reactors. Those two concepts don’t use water as a coolant like traditional nuclear reactors or other SMRs do; instead, they use molten sodium metal and extremely hot salt, respectively, as a coolant.

In theory, small modular reactors, as touted by their supporters, seem like an ideal way to safely decarbonize the electric grid. Supporters, including the federal government, list advantages over traditional reactor designs, including “distinct safeguards,” streamlined designs and fewer refuelings. 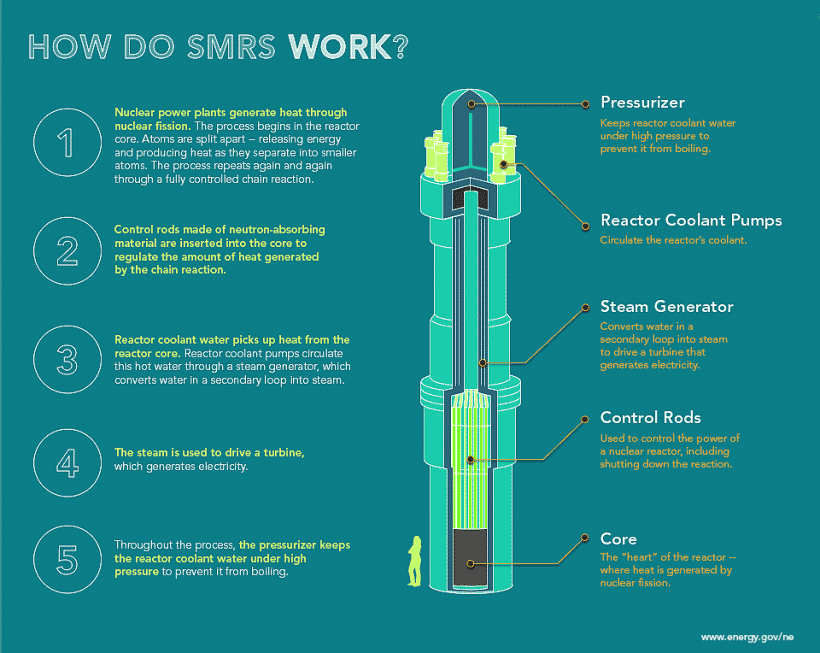 While advanced reactor designs like small modular reactors are applauded by some for their potential to dramatically lower the costs and siting requirements for nuclear energy facilities, not everyone is throwing their support behind the technologies.

Edwin Lyman of the Union of Concerned Scientists counts himself among the SMR skeptics. As the non-profits’ nuclear power safety director, Lyman doesn’t believe that small modular reactor developers have “made the safety case that they don’t need a large structure,” even if the federal nuclear regulation agency “seems to be going along with their approach.”

The International Atomic Energy Association, an intergovernmental nuclear science and technology forum, explains on its website that small modular reactors feature simpler designs that rely on “passive systems and inherent safety characteristics of the reactor, such as low power and operating pressure.”

Greg Rzentkowski, the IAEA’s nuclear installation safety division director, notes on the forum’s website that “SMRs are in general less dependent on safety systems, operational measures and human intervention than existing reactors,” adding that “the usual regulatory approach, which is based on overlapping safety provisions to compensate for potential mechanical and human failures, may not be appropriate and new ideas should be considered.”

Lyman doesn’t believe that the regulatory approach should be altered for new designs.

“I would say that any of these concepts aren’t necessarily safer and a big part of overall safety is not simply intrinsic aspects of the design, but also what is the set of safety requirements that you impose on that [design]?” said Lyman.

In Lyman’s opinion, “if the [U.S. Nuclear Regulatory Commission] grants exemptions and allows small modular reactors to take credit for these inherent safety features to reduce other aspects of operation that add layers of safety […] the overall outcome may be no better or even worse.” He explained that owners of conventional reactors are required by the NRC to draw up emergency evacuation plans that cover a 10-mile zone around the plant, for example, but that developers argue they don’t need such a plan for small reactors.

“But if they’re wrong, if there’s some unexamined accident sequence that can lead to a worse event than they contemplate, then you don’t have that extra layer of safety by being able to evacuate people,” he said.

The topic of nuclear waste disposal is among Lyman’s other concerns about small modular reactors. Although these smaller reactors may require fewer refuelings, he says that “it doesn’t matter what kind of reactor you have, there is no long-term strategy for nuclear waste disposal in this country, and most other countries in the world.” He added that more research needs to be done on storing certain small modular reactor fuel types in the long-term.

Some SMR developers also point to the added sustainability factor that comes from their recycling of nuclear waste. However, Lyman says “there’s no such thing as a reactor that consumes radioactive waste; what they’re really talking about is reprocessing spent fuel,” another term for nuclear waste.

As Lyman wrote in a March 2021 report, “any nuclear fuel cycle that utilizes reprocessing and recycling of spent fuel poses significantly greater nuclear proliferation and terrorism risks than” reactors that don’t reprocess such waste. Reprocessing “provides far greater opportunities for diversion or theft of plutonium and other nuclear-weapon usable materials.”

Lyman also questions the claims that small modular reactors are lower cost, saying that “it’s a situation where these reactors might be more affordable, but not more economical.” Procuring kilowatts of power from a small modular reactor might be cheaper in terms of how much money the overall facility costs but not in terms of how much it costs to produce a kilowatt of power compared to a much larger facility.

Think about it like your last trip to the grocery store: a single can of soda might have cost $1.50, but an entire 12-pack was priced at $10. That single soda might have a lower price than the entire pack, but you’re also getting a lot less soda per dollar spent. Similarly, Lyman believes the price per unit of electricity generated by a fleet of small modular reactors can’t actually be lower than the cost of a group of larger nuclear reactors generating the same amount of power.

Either way, small modular reactor development has attracted investment dollars from the federal government and private companies alike. Bill Gates, for example, is the main financier behind TerraPower, which plans to locate small modular reactors at the site of a former Wyoming coal plant in partnership with PacifiCorp, an investor-owned utility that operates in the intermountain west.

A competing company, the Oregon-based small modular nuclear reactor developer NuScale, has received roughly $192 million so far this year alone from private companies and investors. In 2020, the U.S. Department of Energy announced an up to $1.4 billion cost-share agreement with NuScale for a demonstration project in Idaho. At the time, Rita Baranwal, the DOE’s then-assistant secretary for nuclear energy, called the project “instrumental in the deployment of SMRs around the world.”

Bridget is a freelance reporter and newsletter writer based in the Washington, D.C., area. She primarily writes about energy, conservation and the environment. Originally from Philadelphia, she graduated from Emerson College in 2016 with a degree in journalism and a minor in environmental studies. When she isn’t working on a story, she’s normally on a northern Maine lake or traveling abroad to practice speaking Spanish.