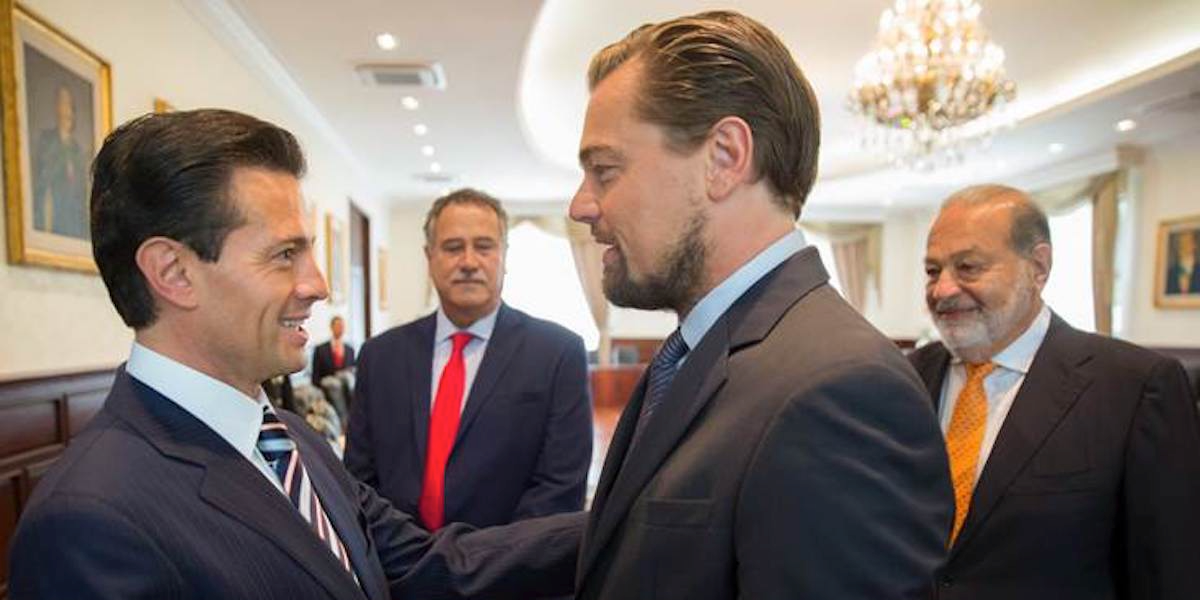 Today is World Oceans Day, and Mexican President Enrique Peña Nieto, Leonardo DiCaprio and telecom tycoon Carlos Slim just signed a memorandum of understanding committing to conserve marine ecosystems in the Gulf of California and to save the vaquita porpoise—the most endangered marine mammal in the world.

The region’s rampant overfishing has driven the native vaquita to the brink of extinction, with fewer than 30 of the animals left in the wild, according to a joint statement from Slim and DiCaprio’s respective foundations.

“Now more than ever, the world is looking for bold leadership at every level to tackle climate change and environmental conservation issues,” DiCaprio said. “I am honored to work with President Peña Nieto, who has been a leader in ecosystem conservation, to ensure the future viability of marine life in the Gulf.”

Vaquitas are threatened due to the use of unauthorized gillnet fishing to catch the totoaba bass, which Chinese markets seek for its bladder. But gillnets can cause the death of animals, including the vaquita, that get trapped in them.

The memorandum, signed Wednesday in Mexico City, calls to make permanent the temporary ban on the use of gillnets in all fisheries within the vaquita’s waters, improving enforcement efforts and increasing prosecution of totoaba poaching.

Other objectives include the prohibition of nighttime fishing in the upper Gulf of California and the Vaquita Reserve, and implementing and enforcing limited entry and exit points throughout the region for all fishing through certified inspectors.

“This action is a critical step towards ensuring that the Gulf of California continues to be both vibrant and productive, especially for species like the critically-endangered Vaquita,” Dicaprio continued. “My Foundation and I look forward to continuing to work with President Peña Nieto, our NGO partners, and the local communities in the Gulf to reach greater progress on these important issues.”

Just last month, DiCaprio urged Pena Nieto via social media to save the vaquita. In response, the president assured the actor and prominent environmentalist that his country would protect the critically endangered porpoise.

“Mexico understands its responsibility as one of the countries with greatest biodiversity,” said Peña Nieto in a statement after the signing. “That is why we have implemented an historic effort to avoid the extinction of a unique species in the world and also to protect important ecosystems such as the Revillagigedo World Heritage Site. Mexico also understands its vulnerability to the effects of climate change, and that is why we committed to meet the commitments of the Paris Agreement and to work with other countries to do the same. We are very pleased to have the support of the DiCaprio Foundation and the Slim Foundation since the sum of effort and teamwork always brings better results.”

“The efforts embraced by the government of Mexico towards the maintenance and preservation of the environment, as well as the relentless work by universities, NGOs and philanthropic organizations have been significant,” Slim said. “Today, we join with the government and the Leonardo DiCaprio Foundation, along with several NGOs, for what could be the last opportunity to rescue and preserve the Vaquita marine mammal. Despite the efforts and investments implemented to save them—their population has dramatically declined, sadly, as victims trapped by illegal fishing gillnets.”