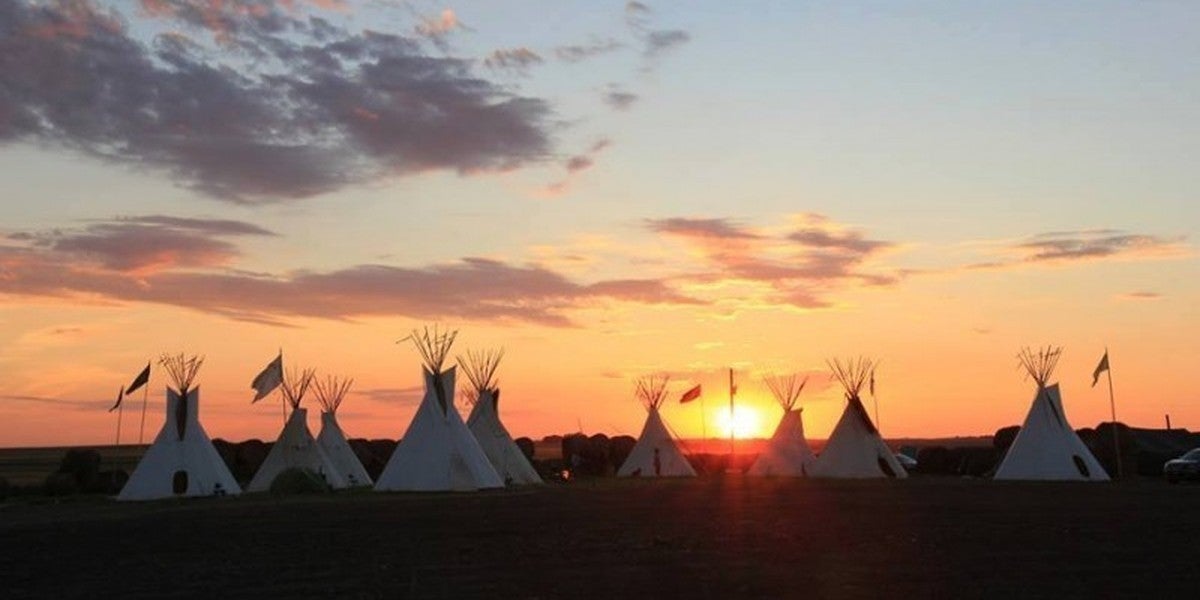 By now, you might have heard that “checking in” at Standing Rock, North Dakota, on Facebook is not throwing off cops who are using the platform to target
Dakota Access Pipeline (DAPL) protesters on the front lines. However, the million-plus Facebook users who have falsely updated their statuses are actually doing something important: It’s bringing the protest to the mainstream.

On Monday, Oct. 31, a Facebook user posted a claim that the Morton County sheriff’s department was using the social media platform to locate protestors.

“Water Protecters are calling on EVERYONE to check-in at Standing Rock, ND to overwhelm and confuse them,” it read.

As the
Guardian reported, the post quickly went viral. The number of check-ins at the Standing Rock reservation page ballooned from 140,000 to more than 870,000 by that afternoon.

The Sacred Stone Camp
told Snopes they are not behind the tactic but pointed out it was a “great way to express solidarity” with the pipeline protest.

Native American communities and their supporters have been battling the construction of the controversial $3.7 billion, 1,168-mile pipeline since April. The proposed DAPL will transfer up to 570,00 barrels of crude oil per day from the Bakken oilfield in North Dakota to a refinery near Chicago, crossing the Missouri River less than a mile away from the Standing Rock Reservation.

The people of Standing Rock, often called Sioux, warn that a potential spill into the river would threaten their drinking water, desecrate sacred sites and risk the health of their reservation.

Thanks to social media, the protest is entering the national conversation. So how else can you help the protestors on the front lines? There are a number of ways you can support the campaign:

Over the past several months,
the peaceful protest against the DAPL has at times turned violent, with officers
using mace and unleashing dogs. Hundreds of arrests have been made.

The Guardian reported that the United Nations advisory forum for indigenous issues is now investigating claims that North Dakota law enforcement has used excessive force, unlawful arrests and mistreated the protesters in jail.

Roberto Borrero, a representative of the International Indian Treaty Council who is assisting the UN forum told the Guardian that the activists’ stories are “very shocking.”

“When you look at what the international standards are for the treatment of people, and you are in a place like the United States, it’s really astounding to hear some of this testimony,” he said.

According to the Guardian, “jailed protesters said it seemed clear that police weren’t prepared to handle hundreds of people at once in their local correctional facilities. A day after their release, many still had numbers and charges written on their arms in marker—which advocates said was an unusual and dehumanizing way for police to track inmates—and some were temporarily kept in cages that they said felt like ‘dog kennels.'”

Police have accused the activists of being overly aggressive in their demonstrations and have
charged many protesters with criminal trespassing.