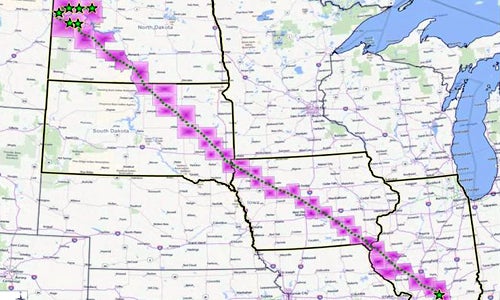 The campaign to oppose the construction of the Dakota Access pipeline (DAPL) continues to gain steam with Leonardo DiCaprio and actors from the upcoming Justice League film joining the cause.

Dakota Access—a subsidiary of Texas-based Energy Transfer Partners LP—has proposed a $3.7 billion, 1,168-mile pipeline that will transfer up to 570,00 barrels of crude oil per day from the North Dakota Bakken region through South Dakota and Iowa into Illinois.

The DAPL, also referred to as the Bakken pipeline, would cross the Missouri River less than a mile away from the Standing Rock Reservation that stands in North and South Dakota. The Missouri River, one of the largest water resources in the U.S., provides drinking water for millions of people.

The people of Standing Rock, often called Sioux, warn that a potential oil spill into the river would threaten the water, land and health of their reservation.

In DiCaprio’s tweet, the Oscar-winning actor and clean energy advocate said he was “standing with the Great Sioux Nation to protect their water and lands,” and linked to a Change.org petition that urges the U.S. Army Corps of Engineers to stop the construction of the Dakota Access Pipeline.

The petition was written by 13-year-old Anna Lee Rain YellowHammer on behalf of Standing Rock youth. It states:

A private oil company wants to build a pipeline that would cross the Missouri River less than a mile away from the Standing Rock Reservation and if we don’t stop it, it will poison our river and threaten the health of my community when it leaks.

My friends and I have played in the river since we were little; my great grandparents raised chickens and horses along it. When the pipeline leaks, it will wipe out plants and animals, ruin our drinking water and poison the center of community life for the Standing Rock Sioux.

According to Dakota Access, their proposed route which will travel through 50 counties in four states “was carefully designed to transport crude in the safest, most efficient way possible.”

However, for the past several months, native American communities and landowners have been battling the construction of the DAPL. 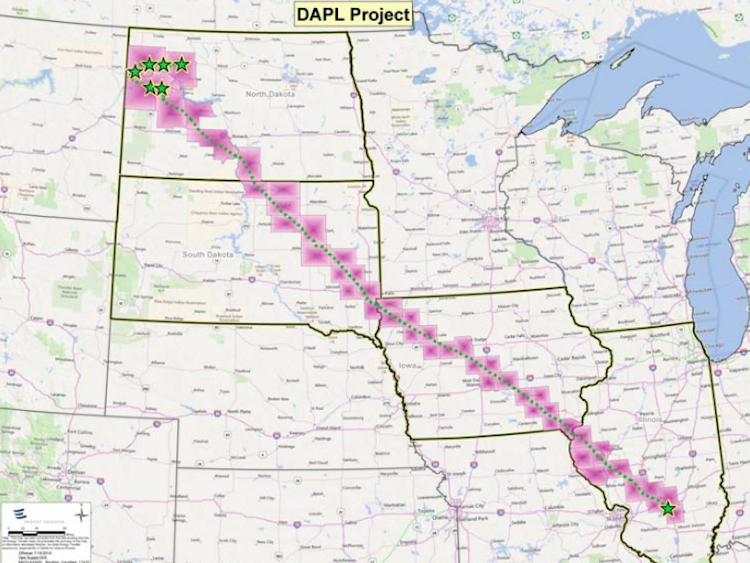 The proposed DAPL will transport crude oil from the North Dakota Bakken region through South Dakota and Iowa into Illinois. Traveling through 50 counties in 4 states. Photo credit: Dakota Access LLC

“Oil companies keep telling us that this is perfectly safe, but we’ve learned that that’s a lie: from 2012-2013 alone, there were 300 oil pipeline breaks in the state of North Dakota,” YellowHammer wrote in her petition. “With such a high chance that this pipeline will leak, I can only guess that the oil industry keeps pushing for it because they don’t care about our health and safety. It’s like they think our lives are more expendable than others.”

Army Corps is currently considering permits to construct and operate the DAPL. They will reportedly make the decision in days, thus prompting renewed urgency from opponents to stop the project.

Alongside DiCaprio, many famous faces have joined the cause. Three stars from the new Justice League film—Jason Momoa, Ezra Miller and Ray Fisher—have posted social media messages to protest the pipeline, as Indian Country reported.

In his Instagram photo, Momoa holds a sign that states he has signed the Change.org petition and that “oil pipelines are a bad idea.”

“We want to say that our hearts are with the Native youth of the Standing Rock Reservation, and that we oppose the Dakota Access Pipeline,” Miller says in the video.

Fisher also urged viewers to visit the website Rezpect our Water, which has been launched against the pipeline.

A recent a 500-mile relay, Run For Your Life: No DAPL, was organized in opposition of the project. The run, which started April 28 from Cannon Ball, North Dakota ended at the Army Corps Omaha District office in Nebraska on May 3.

“I am doing Run For Your Life: No DAPL because I want the younger generations to know what they are looking forward to in the future if this pipeline comes through,” lead run coordinator and Standing Rock member said. “I am running for the whole Oceti Sakowin. I am carrying all their prayers on the road with us. Water is essential to everyday life. Why hasn’t someone even given a thought about the 3 to 4 million people who use our Missouri River water? It is 2016, and here we are fighting our battles, running across the state of South Dakota to show our statement.”

The runners delivered a unified statement to Colonel John Henderson and the Army Corps in resistance to the oil pipeline.

to determine potential environmental effects of the DAPL.

“If Dakota Access fails to meet the conditions of any one of these enacted recommendations it stands as a clear indication that it is not a safe and sound project deserving of permitting,” the letter concludes.

Ed Fallon, director of the nonprofit Bold Iowa and former Democratic gubernatorial candidate for Iowa, met the runners in Omaha. He delivered a speech that touched on how some farmers and landowners felt no choice but to sign their land away for construction of the Bakken pipeline.

Army Corps of Engineers spokesperson Eileen Williamson said the Corps is evaluating the environmental impacts that take place during construction.

Williamson said officials must work with the U.S. Fish and Wildlife Service, the state Historic Preservation Officer and Tribal governments. She says the Corps is also reviewing public comments.