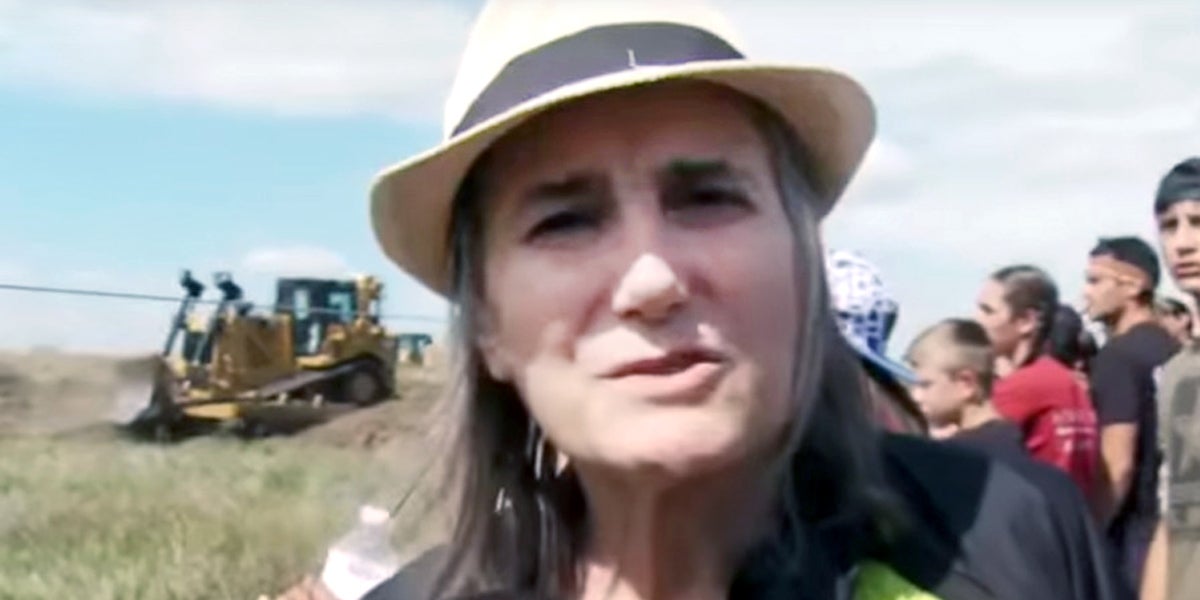 There is good news and bad news for those fighting the Dakota Access Pipeline (DAPL).

First the bad news. A week ago I wrote about the outrageous attacks by security personnel on those protesting against the pipeline by using dogs and pepper spray.

Some of the most powerful footage of the incident was fronted by veteran Democracy Now! journalist, Amy Goodman, who had been on site to witness the despicable attacks.

Goodman opened her report by stating:

“On Saturday in Dakota, security guards working for the Dakota Access Pipeline company attacked Native Americans with dogs and pepper spray as they resisted the $3.8 billion pipeline’s construction.”

The footage went viral and lead to outrage from across the world including on CBS, NBC, NPR, CNN, MSNBC and Huffington Post. A colleague who has watched Goodman’s reporting for decades said it was the most passionate they had ever seen her broadcasting live.

Well now in a travesty of American justice, Democracy Now! announced over the weekend that an arrest warrant had been issued in North Dakota for Goodman. She has been charged with criminal trespassing, a misdemeanor offense.

It is totally outrageous that the U.S. authorities are trying to silence such a journalist as Goodman.

“This is an unacceptable violation of freedom of the press,” Goodman said in a statement. “I was doing my job by covering pipeline guards unleashing dogs and pepper spray on Native American protesters.”

Meanwhile, the day before, after an injunction by the Standing Rock Sioux was denied, the federal government stepped in immediately afterwards to halt construction of the pipeline.

For now at least.

“In recent days, we have seen thousands of demonstrators come together peacefully, with support from scores of sovereign tribal governments, to exercise their First Amendment rights and to voice heartfelt concerns about the environment and historic, sacred sites. It is now incumbent on all of us to develop a path forward that serves the broadest public interest.”

“The Army will not authorize constructing the Dakota Access Pipeline on Corps land bordering or under Lake Oahe until it can determine whether it will need to reconsider any of its previous decisions regarding the Lake Oahe site under the National Environmental Policy Act (NEPA) or other federal laws.”

“Therefore, construction of the pipeline on Army Corps land bordering or under Lake Oahe will not go forward at this time … This case has highlighted the need for a serious discussion on whether there should be nationwide reform with respect to considering tribes’ views on these types of infrastructure projects.”

Reaction was mixed on the ground as people poured over the fine print behind the headline news. Indeed, as usual, the devil is on the detail.

The Standing Rock Sioux Tribe replied that the announcement sets the “stage for a nationwide reform, establishing consultation with tribes regarding the need for meaningful tribal input for all pipeline projects in the future. This federal statement is a game changer for the tribe and we are acting immediately on our legal options, including filing an appeal and a temporary injunction to force DAPL to stop construction.”

“The feeling on the ground is one of mixed emotion. People are very upset that the tribe’s injunction motion was denied,” said one of the leading female activists, Kandi Mossett, who pointed out that the request to stop construction near the contentious site, was just that: a request.

Indeed, as DesmogBlog pointed out, even though the government has requested that the pipeline be stopped: “The federal government can’t stop Energy Transfer from proceeding to construct the Dakota Access Pipeline on private land, which is why it asked DAPL to voluntarily halt construction there.”

The Red Warrior Camp was more dismissive and posted online: “Nothing has changed for the thousands of people who came from thousands of miles on prayers and fumes to stop this pipeline. Stay peaceful without backing down.”

“Let’s reflect on that for a moment: A company that recently sicced dogs on Water Protectors, including families, who stepped onto a sacred site to prevent its destruction, is being asked to voluntarily do the right thing … Right now, all that’s being asked is that they play their part in a short term political performance aimed at letting the air out of a movement’s tires.”

“So what did the federal government do? Probably the smartest thing they could have: They gave us the illusion of victory … But if you raise a glass to Obama and declare this battle won, you are erasing a battle that isn’t over yet. And by erasing an ongoing struggle, you’re helping to build a pipeline.”

So for now the struggle continues, and the protests are going global. There will be demonstrations across the U.S. Tuesday and solidarity ones across the globe, including in London at 6 p.m. For more details go here.