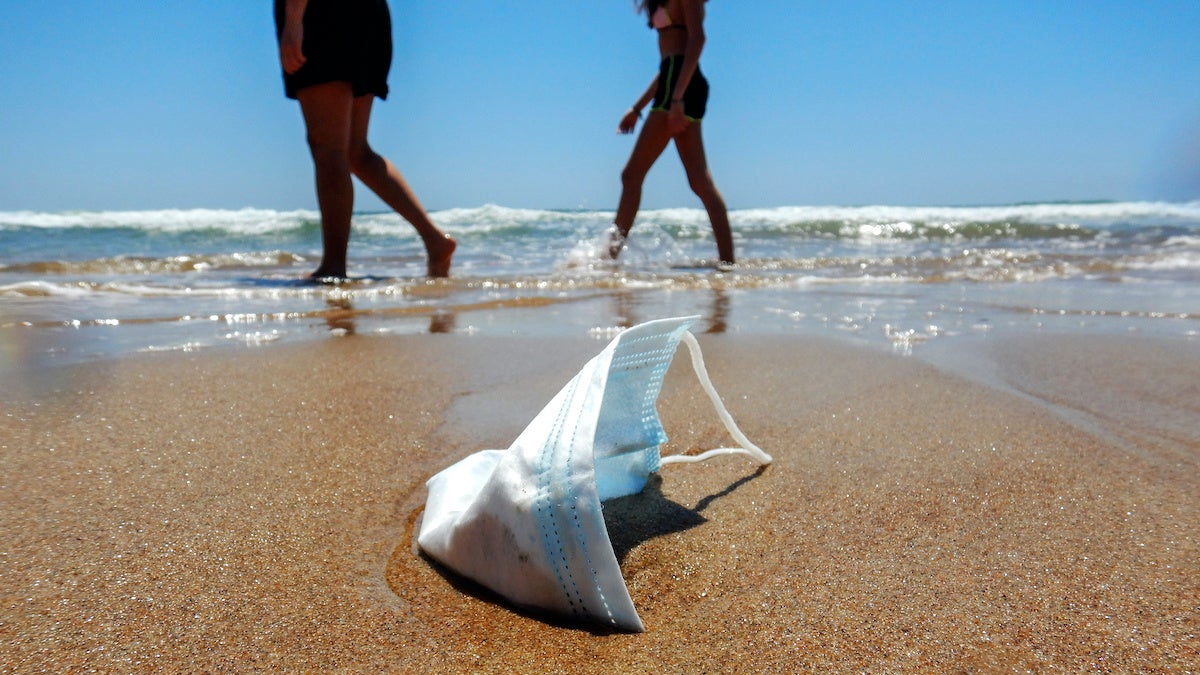 A used mask lies thrown away on a beach in Gaeta, Italy on June 8, 2020. Salvatore Laporta / KONTROLAB / LightRocket via Getty Images

As if the Texas-sized gyre of plastic floating around the Pacific Ocean was not troubling enough, now there is a new scourge polluting the world’s waters: face masks and sanitary gloves.

The COVID-19 detritus has meant that discarded face masks floating like jelly fish and latex gloves lining the seafloor are adding to the world’s plastic waste crisis, as The Guardian reported.

In an effort to clean up the Mediterranean Sea, divers from the French non-profit, Opération Mer Propre (Operation Clean Sea) found dozens of gloves, masks and bottles of hand sanitizer beneath the waves of the Mediterranean, mixed in with the usual litter of disposable cups and aluminum cans, according to The Guardian.

While the amount of personal protective equipment found in the Mediterranean was admittedly small, the uptick in pollution from those items signals an ominous trend. Disposable masks, for instance, may feel like soft cotton, but they’re almost all made from non-biodegradable material such as polypropylene. That means when the non-biodegradable material is discarded into a storm drain, it empties out into the rivers and seas, as the CBC reported.

As EuroNews reported, land-based activity accounts for 80 percent of ocean pollution, with 50 percent a direct result of single-use plastics. Now, we must act to avoid making the situation worse, say experts from environmental non-profit City to Sea in the UK. That’s a tall order as efforts to curtail single-use plastics and plastic bags have been put on hold due to concerns about hygiene. The Centers for Disease Control’s recent recommendations for reopening offices even advocated a dramatic increase in single-use plastics, arguing that communal snacks and coffee should be replaced by individually wrapped items, as EcoWatch reported.

“It’s the promise of pollution to come if nothing is done,” said Joffrey Peltier of Opération Mer Propre, to The Guardian.

That trend is on display in Hong Kong, where face masks piled up on beaches and nature trails, posing threats to marine life and wildlife habitats.

“We only have had masks for the last six to eight weeks, in a massive volume … we are now seeing the effect on the environment,” said Gary Stokes, founder of the environmental group Oceans Asia, in March, as Reuters reported.

Stokes cited the example of Hong Kong’s isolated and uninhabited Soko islands, south of its international airport. He claimed to have initially found 70 discarded masks on a small stretch of beach and when he came back a week later, there were more than 30 new ones.

“That was quite alarming for us,” he said.

In France, authorities have ordered two billion disposable masks, said Laurent Lombard of Opération Mer Propre. “Knowing that … soon we’ll run the risk of having more masks than jellyfish in the Mediterranean,” he wrote on social media alongside a video of a dive showing algae-entangled masks and soiled gloves in the sea near Antibes, according to The Guardian.

Opération Mer Propre would like to see the images of the debris prompt people to use reusable masks and wash their hands more often rather than wear latex gloves. “With all the alternatives, plastic isn’t the solution to protect us from Covid. That’s the message,” said Peltier, as The Guardian reported.