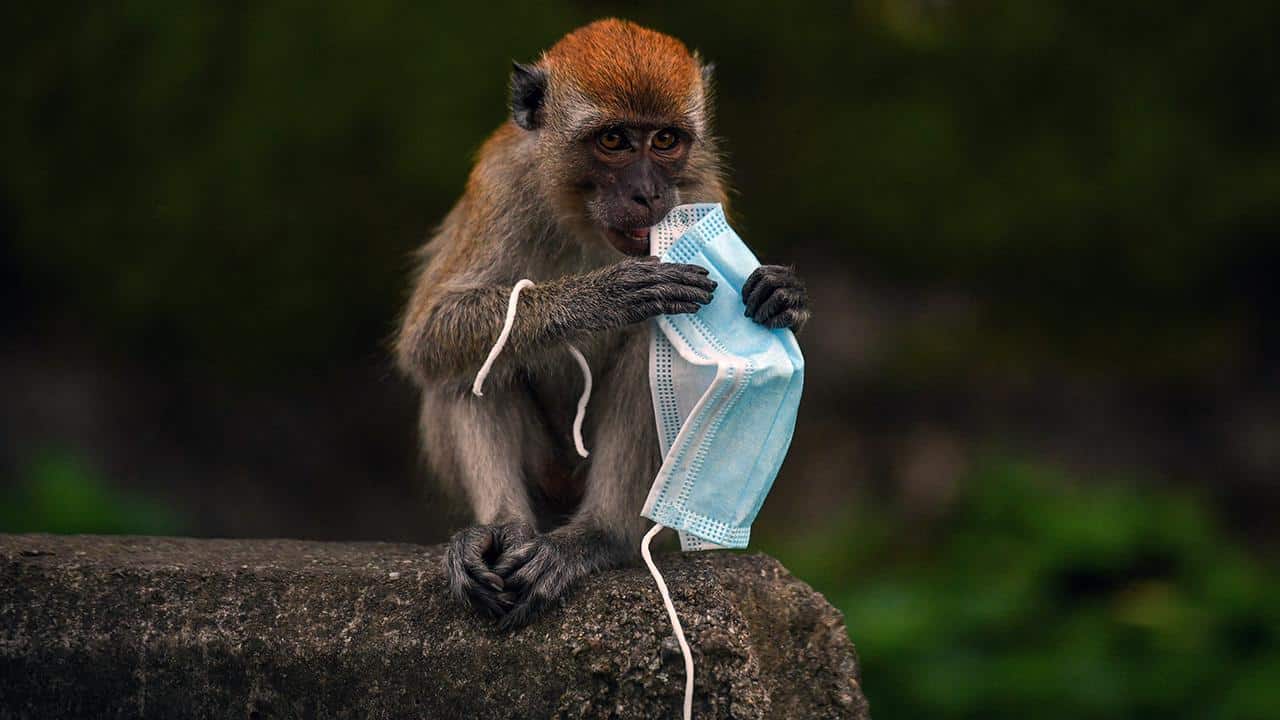 This picture taken on Oct. 30, 2020 shows a macaque monkey playing with a face mask, used as a preventive measure against the spread of the COVID-19, in Genting Sempah in Malaysias Pahang state. MOHD RASFAN / AFP / Getty Images

One of the most distinguishable features of the COVID-19 era is the public, everyday use of personal protective equipment (PPE), mainly in the form of disposable face masks and latex gloves. And while these thin layers protect us and others from transmitting and contracting SARS-CoV-2, the novel coronavirus that causes the lower respiratory tract disease, scientists are now beginning to understand just how harmful these objects can be for ecosystems and wildlife.

The demand for PPE has put some countries on a war footing, to give governments sweeping wartime authorities to control the economy and compel private businesses to join national fights against the pandemic. “Our national plan launches a full-scale war-time effort to address the supply shortages by ramping up production and protective equipment, syringes, needles, you name it,” said President Joe Biden in January. Even the inventor of the lifesaving N95 mask favored by front-line medical workers, Dr. Peter Tsai, said that countries should stockpile PPE as if they were on a war footing. “Weapons are not profitable,” he said in August. “But they need to have the weapons and then they don’t use them for 10 or 20 years. You need to see this kind of PPE as military weapons.” A majority of U.S. states, as well as the District of Columbia and Puerto Rico, have instituted “mask mandates” requiring people to wear face coverings in public to limit the spread of COVID-19. 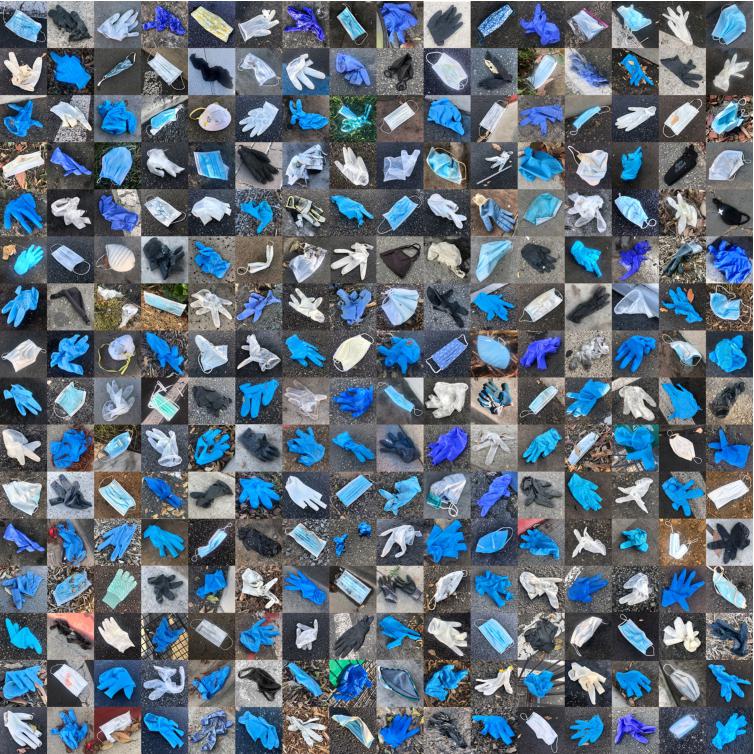 But while these “weapons” that fight coronavirus have proved to be lifesaving for humans, an increasing number of non-human animals are finding them to be a brand-new, and often deadly, threat that has suddenly littered their natural habitat. One main problem is that face masks and latex gloves are disposable, and people often do not dispose of them properly. How many times have you seen a used mask or glove lying on the street or stuck in a bush or floating in a waterway? Welcome to the world’s new pollution problem. (As if the scourge of plastic waste weren’t enough of an issue for the global ecosystem.)

According to the World Health Organization, the fabric masks that should be used to fight the pandemic are made of three layers of fabric: an inner layer of absorbent material like cotton, a middle layer of non-woven non-absorbent material, like polypropylene, which is a kind of plastic, and an outer layer of non-absorbent material, like polyester. That means that these masks, if improperly discarded, have the power to threaten ecosystems for many decades, even centuries, to come. Polypropylene takes 20 to 30 years to decompose in a landfill. Polyester can take up to 200 years. Researchers from the University College London Plastic Waste Innovation Hub recently released a report that estimated that about 70,000 tons of plastic waste would be produced if all Britons wore a single-use mask each day for a year.

In August 2020, during a cleanup project at a canal in the Dutch city of Leiden, scientists discovered a fish trapped in a latex glove, a finding that prompted them to investigate whether this problem was more widespread. Their fears were soon realized: In just a few months, researchers found hundreds of face masks littering the city’s historic canals. Their findings were released in a March report published in the journal Animal Biology about the impact that PPE litter is having on wildlife. The grim conclusion: All those face masks and latex gloves are killing birds, fish and other wildlife across the globe. The researchers, from the Naturalis Biodiversity Center, the Institute of Biology at Leiden University, and the Institute for Water and Wetland Research, all based in the Netherlands, said that animals are becoming entangled in the gear, while others, mistaking it for food, are dying from fatally ingesting it. Some animals are building homes with it. 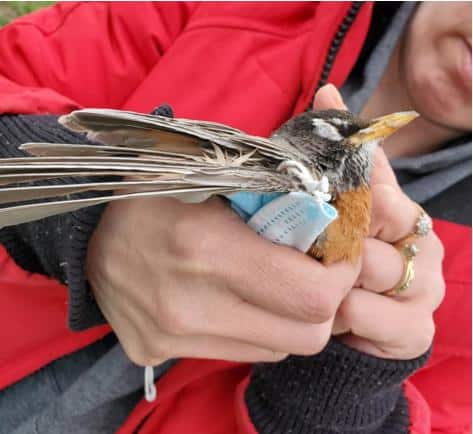 Grounded flights: One of the early victims of COVID-19 litter, an American robin (Turdus migratorius), was found entangled in a face mask in Chilliwack, British Columbia, Canada, in April 2020. Sandra Denisuk

“As always with these single-use items, you’re not really looking after them and they end up in the environment really soon. They start becoming a real problem,” Auke-Florian Hiemstra, a biologist at the Naturalis Biodiversity Center in Leiden and a co-author of the report, told CNN. “I think it’s ironic that the materials that protect us are so harmful to the animals around us,” he added.

The scientists included specific examples in their study, such as a dead perch (Perca fluviatilis) entrapped in a latex glove “with only its tail sticking out” in the Netherlands; a common coot (Fulica atra) building a nest with a face mask, also in the Netherlands; an American robin (Turdus migratorius) entangled in a face mask in British Columbia; a juvenile peregrine falcon (Falco peregrinus) whose talons got stuck in a face mask in Yorkshire; cygnets from a mute swan (Cygnus olor) with face masks wrapped around their beaks in Lake Bracciano, near Rome, Italy; and a red fox (Vulpes vulpes), entangled in a face mask, and a European hedgehog (Erinaceus europaeus), entangled in a glove, both in the United Kingdom. Even stray dogs have been found with PPE in their stomachs. The list goes on and sadly, will go on and on: Hiemstra warned that the entire animal kingdom may ultimately be impacted by humans’ COVID-19 litter.

“It makes sense that birds are being reported—they’re conspicuous, and you have a lot of people looking at them,” said Greg Pauly, a herpetologist and co-director of the Urban Nature Research Center at the Natural History Museum of Los Angeles County, who suspects that PPE litter is being ingested by many wild animals—a serious problem, the impact of which we’re not going to fully understand any time soon. “Ingestion isn’t something you can easily see, and almost no one is looking at it,” he said, recommending that wildlife biologists conduct more necropsies of wildlife across all species to collect data for future studies.

More than 30 years ago, the Ocean Conservancy, a nonprofit environmental group based in Washington, D.C., launched the International Coastal Cleanup (ICC), a global trash-picking event meant to eliminate ocean trash, mainly in the form of plastic waste. Every year, volunteers from states and territories throughout the United States and more than 100 countries around the world come together to participate in a local cleanup event. The COVID-19 pandemic has broadened the event’s remit: In July of 2020, Ocean Conservancy added a new category of trash to Clean Swell, the mobile app that volunteers use to log their cleanup work: “PPE.”

In March, the group released a report on the rising threat of PPE pollution and found that, based on a survey of ICC volunteers and coordinators conducted in early 2021, 94 percent of respondents observed PPE pollution at a cleanup in 2020, during which more than 100,000 pieces of PPE—mainly masks and gloves—were picked up on beaches across 70 countries. More than half of the survey respondents said they saw PPE littering their home communities every day.

What can we do? “We really encourage people to use reusable face masks,” said Liselotte Rambonnet, a biologist at the Institute of Biology at Leiden University and co-author of the Animal Biology report, told CNN. “All the interactions we found were with single-use face masks because they are inexpensive and can be lost more easily,” she added. Unfortunately, disposable PPE cannot be recycled, so they must go into the regular trash. When doing so, make sure that all contaminated PPE is disposed of in a covered waste bin lined with a garbage bag and that they are always out of reach from children and pets. In no case should you simply toss your used PPE on the street or in a waterway.

In addition, it is critical to cut the two ear straps on each side of your mask before disposing of it to reduce the possibility of wildlife getting entangled in it. And let’s take this opportunity to look at the big picture: How all our medical and plastic waste is impacting the natural world and what we can do to reduce this global pollution crisis.

“As we protect our communities and each other in the face of this invisible threat, we can also do more to protect our communities and our ocean from the impacts of the pandemic,” writes Janis Searles Jones, the CEO of Ocean Conservancy. “Once the need for PPE subsides as the pandemic recedes, we have a real opportunity to reduce our overall plastics footprint and to ensure that the plastics that we use are recyclable, made of recycled content, and stay out of the ocean and our environment.”

But even if we change our behavior now when it comes to PPE disposal, it may be too late. According to a report by OceansAsia, a marine conservation group based in Hong Kong, an estimated 1.56 billion face masks entered the ocean in 2020 alone. “Even if we take steps tomorrow, then for hundreds of years there will be face masks floating around in the ocean, still impacting our wildlife,” said Hiemstra. “I’m afraid it will not stop very soon, and actually the problem will only get worse over time, sadly.”