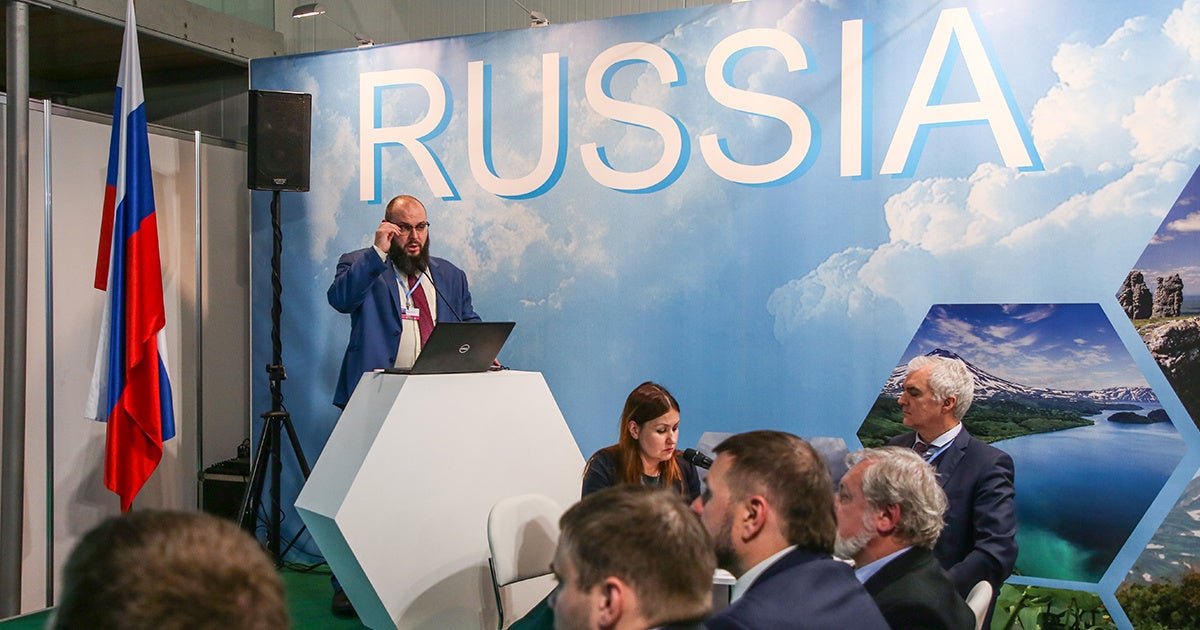 The Russia pavilion at the COP24 conference in Katowice, Poland. Beata Zawrzel / NurPhoto via Getty Images

The U.S. has thrown its hat in the ring with three other fossil-fuel friendly nations to block the COP24 talks from “welcoming” the landmark Intergovernmental Panel on Climate Change (IPCC) report that warned that we must reduce greenhouse gas emissions to 45 percent of 2010 levels by 2030 in order to limit warming to 1.5 degrees Celsius above pre-industrial levels, BBC News reported.

The report, released in October, was commissioned by a 2015 Conference of the Parties to the United Nations Framework Convention on Climate Change, but now the roughly 200 countries gathered for the 24th conference in Katowice, Poland have failed to formally acknowledge it.

The failure hinged on language. The majority of delegates wanted to “welcome” the report, but the U.S. joined with other oil-producing countries—Russia, Saudi Arabia and Kuwait—Saturday night to insist the report be only “noted,” The Guardian reported. Because UN rules insist on consensus, delegates were therefore not able to publish any text relating to the report.

“It’s not about one word or another, it is us being in a position to welcome a report we commissioned in the first place,” Ruenna Haynes from St. Kitts and Nevis said, BBC News reported. “If there is anything ludicrous about the discussion it’s that we can’t welcome the report.”

UN: Could you write us a report on global warming of 1.5C?
IPCC: It will take years of volunteer effort from scientists.
UN: We understand. It's important.
IPCC (3 years later): Here's your report.
UN: Er, right, about that report. https://t.co/5h5kn3M8MZ

The move tenses the atmosphere for the last five days of talks at COP24, during which ministers, who arrive Monday, will work to establish a rulebook for implementing the Paris agreement to limit global warming to “well below” two degrees Celsius above pre-industrial levels. It also raises concerns that the Trump administration is evolving from simply withdrawing the U.S. from international efforts to fight climate change to actively disrupting those efforts.

“It is troubling. Saudi Arabia has always had bad behavior in climate talks, but it could be overruled when it was alone or just with Kuwait. That it has now been joined by the U.S. and Russia is much more dangerous,” Union of Concerned Scientists director of strategy and policy Alden Meyer told The Guardian.

Indeed, Saudi Arabia had fought to limit the conclusions of the IPCC report when it was released in Korea earlier in the fall, but eventually agreed to let it be released as is, BBC News reported.

The scientists who worked hard on the report also expressed dismay at Saturday’s failure.

“What is so disturbing in our [report] … that four governments cannot even ‘welcome’ its findings?” French climate scientist Val. Masson-Delmotte asked in a Twitter thread. “A 1.5°C and a 2°C worlds are VERY different in terms of mean climate, extremes, sea level rise, and climate-related risks, with the emergence of climate change hotspots challenging basic water, food, economic security and the risk of irreversible loss of wildlife,” she continued, hinting at the real-world stakes of ignoring the report.

A 1.5°C and a 2°C worlds are VERY different in terms of mean climate, extremes, sea level rise, and climate-related risks, with the emergence of climate change hotspots challenging basic water, food, economic security and the risk of irreversible loss of wildlife

Former UK climate negotiator Yamide Dagnet of the World Resources Institute expressed hope that the arrival of the ministers Monday would turn the tide and persuade COP24 to acknowledge the report after all.

“We hope that the rest of the world will rally and we get a decisive response to the report,” Dagnet said. “I sincerely hope that all countries will fight that we don’t leave COP24 having missed a moment of history.”

"We are clearly the last generation that can change the course of climate change." #COP24 #climatechange @PierreCannet @WBG_Climate @UN @UNFCCC @jellsmoor https://t.co/da7TvdoZpF