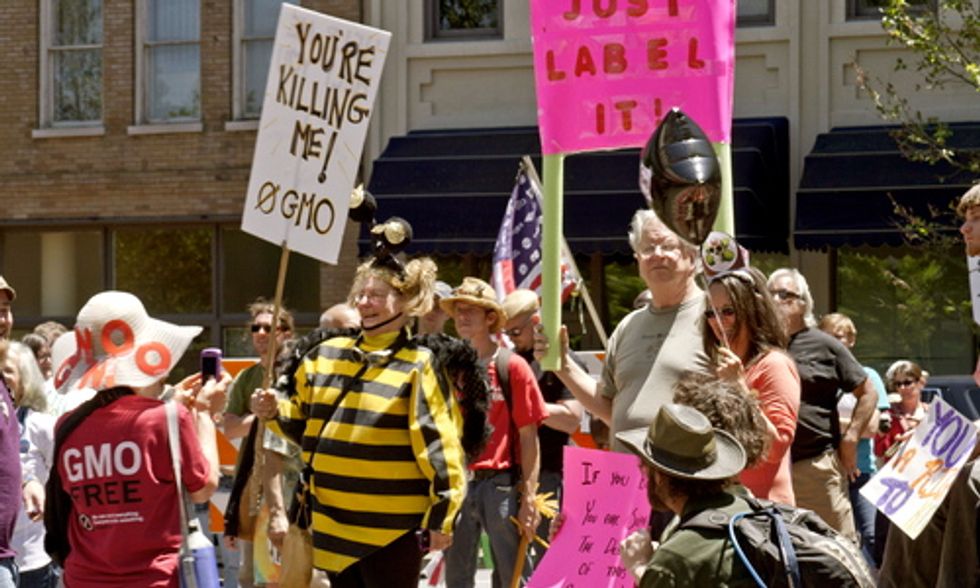 The Colorado Supreme Court overturned a major challenge by mainstream biotech, pesticide and grocery interests last week, allowing for the possibility of a genetically modified organisms (GMO) labeling bill to appear on the state's November 2014 ballot.

Protests, like this one held last May in Asheville, NC, represent the vast number of Americans who support labeling of GMO foods. Photo credit:
J. Bicking / Shutterstock.com

In order for Ballot Initiative #48—a bill that would mandate the labeling of GMO foods on product packaging—to come before voters, it needs 86,105 petition signatures to be submitted to the state by early August, according to Right to Know Colorado GMO, a grassroots initiative established by local residents, which introduced the bill.

“We are pleased that the state Supreme Court ruled in favor of the GMO labeling ballot title, and we look forward to bringing a GMO labeling initiative before the voters of Colorado this fall," said Larry Cooper, one of the proponents of the Right to Know initiative.

With no federal GMO labeling requirements in place in the U.S., it is estimated that more than 80 percent of conventional processed foods contain genetically engineered ingredients, primarily from GMO corn, soy, canola, cotton, sugar beets and other GMO crops. However, according to national GMO labeling advocacy organization Just Label It, more than 90 percent of U.S. consumers surveyed want mandatory labeling of GMO foods.

While pro-biotech interests claim that GMOs are safe, a growing body of scientific research suggests there may be enough risks to justify the need for consumer transparency. More than 64 other countries require mandatory labeling of genetically engineered or GMO foods. Colorado joins more than two dozen other states, including Oregon, Arizona, Vermont, New Hampshire, New York, Pennsylvania and elsewhere, in calling for GMO labeling legislation.

"Coloradans have the right to know what is in their food, and to make purchasing decisions for their families based on knowing whether their foods are genetically engineered, and we believe they will have that opportunity after November,” said Cooper.