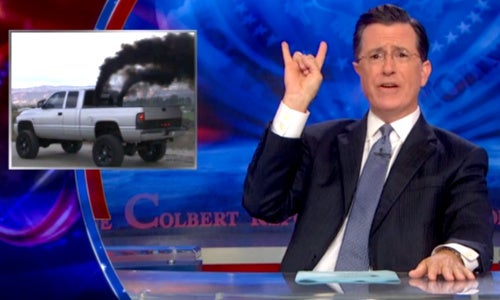 If you’re the type of person others would consider an environmentalist or you just happen to be at the wrong place at the wrong time, you might be subjected to a fellow motorist “rolling coal.”

When a driver rolls coal, he or she revs up their diesel truck engine to produce and emit large black clouds from the $500 smoke stacks they would have needed to install on their vehicles. Also known as “Prius repellent,” the act of rolling coal is basically a protest of the U.S. Environmental Protection Agency, President Barack Obama and any inkling of green they have added to fuel standards.

It’s also meant to make you angry, of course, but let the Colbert Report help you prevent that.

If black smoke ever covers your windshield, just remember Stephen Colbert’s explanation of what the driver in front of you is thinking before you react with equal irrationality.

“For too long those Earth huggers have shoved their agenda down our throats,” Colbert says as he enters the mind of a coal roller. “Finally, there’s a way to shove our agenda down their lungs.”

Colbert is likely spot on. If you’re driving a Prius or electric vehicle, you’re nothing more than a “Green” making coal rollers see red, anyway.