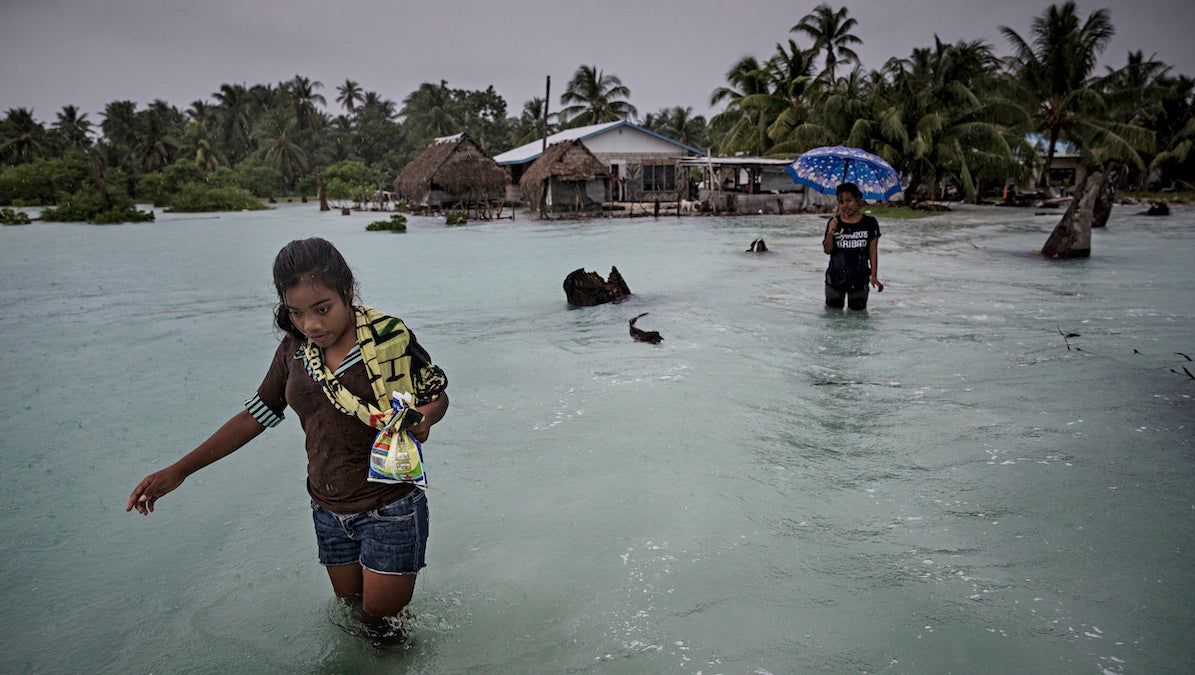 The people of Kiribati have been under pressure to relocate due to sea level rise. A young woman wades through the salty sea water that flooded her way home on Sept. 29, 2015. Jonas Gratzer / LightRocket via Getty Images

Refugees fleeing the impending effects of the climate crisis cannot be forced to return home, according to a new decision by the United Nations Human Rights Committee, as CNN reported. The new decision could open up a massive wave of legal claims by displaced people around the world.

The first-of-its-kind ruling opens the door for a new kind of legal claim to future protections for people whose lives and health are threatened by a warming planet and sea-level rise, according to legal experts, as The Guardian reported. The ruling is expected to have profound consequences as the impacts of the climate crisis are predicted to displace tens of millions of people.

The UN Human Rights Committee ruling started from the case of Ioane Teitiota, who applied for refugee protection from New Zealand, claiming that his life was at risk in his home country of Kiribati, which is predicted to be one of the first countries lost due to sea-level rise, as CNN reported. Kiribati is an equatorial island nation in the middle of the Pacific that spans 1.3 million square miles, but only has 310 square miles of land and roughly 110,000 people.

The committee heard Teitiota’s claim that his home island South Tarawa had increased in population by nearly 50 times from 1,641 in 1947 to 50,000 in 2010 due to sea level rising, leading to other islands becoming uninhabitable. That explosion in population has led to violence and social tensions, as The Guardian reported.

Teitiota claimed that a shortage of freshwater and difficulty growing crops because of the salinity of the water posed a threat to him and his family. Further, he argued that because the island is predicted to be uninhabitable in 10 to 15 years, his life was in danger if he remained there, according to The Guardian.

The committee did not fully agree with him. It rejected his claim that he faced an imminent threat to his life. It said, “sea level rise is likely to render the republic of Kiribati uninhabitable … the timeframe of 10 to 15 years, as suggested by [Teitiota], could allow for intervening acts by the republic of Kiribati, with the assistance of the international community, to take affirmative measures to protect and, where necessary, relocate its population,” according to the The Guardian.

However, the committee added that New Zealand and every country would violate a person’s international rights if they force them back to countries where the climate crisis poses an immediate threat, according to CNN.

That decision, which is not legally binding to countries, does point to obligations that developed countries will face as the climate crisis intensifies. In addition to sea-level rise, CNN pointed out that droughts and crop failure are also expected to contribute to the tens of millions who will need to move to other areas in coming years. Furthermore, a World Bank study from 2018 found that 143 million people across South Asia, sub-Saharan Africa and Latin America are at risk of becoming climate migrants.

“Without robust national and international efforts, the effects of climate change in receiving states may expose individuals to a violation of their rights,” its ruling said, as CNN reported.

“What’s really important here, and why it’s quite a landmark case, is that the committee recognized that without robust action on climate at some point in the future it could well be that governments will, under international human rights law, be prohibited from sending people to places where their life is at risk or where they would face inhuman or degrading treatment,” said Jane McAdam, director of the Kaldor center for international refugee law at the University of New South Wales, to The Guardian. “Even though in this particular case there was no violation found, it effectively put governments on notice.”