Why Everybody Is So Excited About 23 Salmon 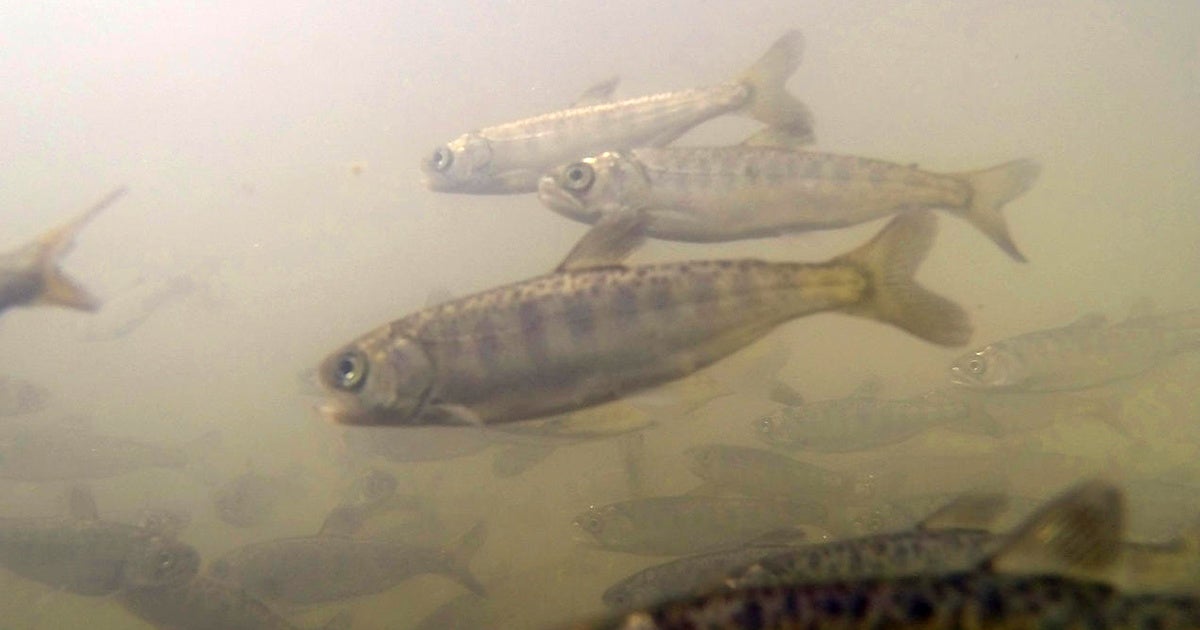 For Chinook salmon, the urge to return home and spawn isn’t just strong — it’s imperative. And for the first time in more than 65 years, at least 23 fish that migrated as juveniles from California’s San Joaquin River and into the Pacific Ocean have heeded that call and returned as adults during the annual spring run.

For thousands of years, spring-run Chinook were the most abundant salmon in central California. Every year beginning in March, thousands upon thousands of adult fish made their way from the Pacific Ocean into San Francisco Bay, then muscled upstream for nearly 370 miles through the Central Valley’s rich agricultural lands until they reached the cool waters of the high Sierra Nevada. Their counterparts, fall-run Chinook, would make the same journey in the autumn.

Spring-run Chinook spent the summer near the river’s headwaters, spawned there in the fall, and then died, the nutrients from their decaying carcasses feeding insects and fertilizing aquatic and terrestrial plant life. Their offspring would make the perilous reverse trip, either swimming to sea during their first spring, when still small enough to fit in a human hand, or remaining in the river upland and migrating to the ocean as yearlings the following spring. Two to five years later, instinct would compel them to return to their natal grounds to spawn, continuing the cycle.

Development in the 19th and 20th centuries broke that ancient pattern. The San Joaquin was dammed to meet the demands of irrigation for agriculture, and by the 1940s some sections of the river had run dry. Cut off from their spawning grounds, Chinook disappeared from the river.

But the San Joaquin — and the Chinook and other wildlife that depend on it — are getting a second chance. Thanks to a lawsuit brought by NRDC against the federal government that was settled in 2006 after 18 years of litigation, native fish populations are to be restored to “good condition” while minimizing the impacts of reduced water diversions for agricultural and other uses.

California state and federal government plans call for spending nearly 0 million through 2025 to bring back flow, wetlands and the fish populations of the San Joaquin. Releases of water from the Friant Dam specifically for restoration purposes began in 2009, followed by the fish reintroduction effort in 2014. The 23 adult Chinook salmon caught (and released) this year represent the first spring-run salmon to return from the Pacific to the upland reaches of the river since 1950.

“This is a pretty momentous step,” said Doug Obegi, NRDC’s director of the California River Restoration. “Despite [the drought] drying up the river completely and destroying riparian wetlands, spring-run salmon are coming back. It’s really encouraging, and it’s a hopeful sign that we can ultimately rebuild salmon runs to tens of thousands of salmon returning.”

The effort is benefiting more than just the salmon. “We now have a connected river year round,” said Obegi. “It’s less than what’s called for in the settlement, but it’s helping to restore the riparian zone, and that’s restoring birds and other native fish. We’re starting to find sturgeon and Pacific lamprey.“ 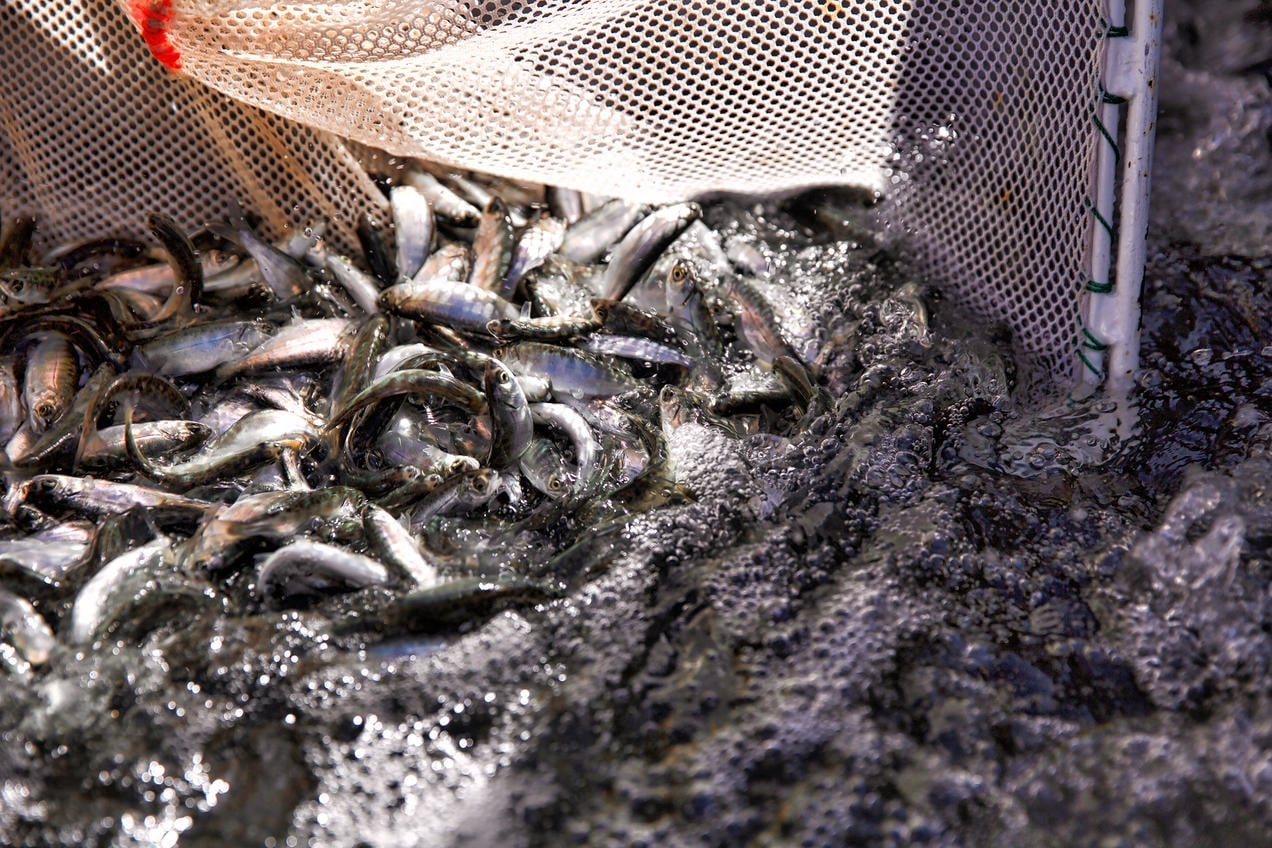 The 23 adult salmon caught in April and May came from a cohort of 38,106 juveniles released in the upper San Joaquin in March 2017. That’s a relatively small number, by the way, given that a single female lays on average 4,200 eggs. To nab the returning adults, which are now more than two feet long, biologists deployed a truck-size, cylindrical mesh contraption called a fyke net.

Scientists took tissue samples for genetic testing to confirm the salmons’ origins and then transported the fish in 500-gallon tanks past human-made barriers to stretches of the river where the Chinook have historically spawned. Don Portz, director of the San Joaquin River Restoration Program, points out that they probably caught only a fraction of the fish making the return trip. He said, “If there are 23 that we’re sure of, there’s probably 100 fish that came back.”

Three of the Chinook caught by the scientists didn’t survive that arduous return trip. But they are still providing invaluable information: The scientists recovered coded wire tags that verify the salmon were part of the March 2017 release. What’s more, by analyzing their ear bones, called otoliths, they can learn where the fish have traveled over the past two years. That’s because, like tree rings, a new layer of bone grows every year, embedded with the unique chemical signature of the water the long-haul swimmers inhabited. That information helps identify other areas where these threatened fish have lived. 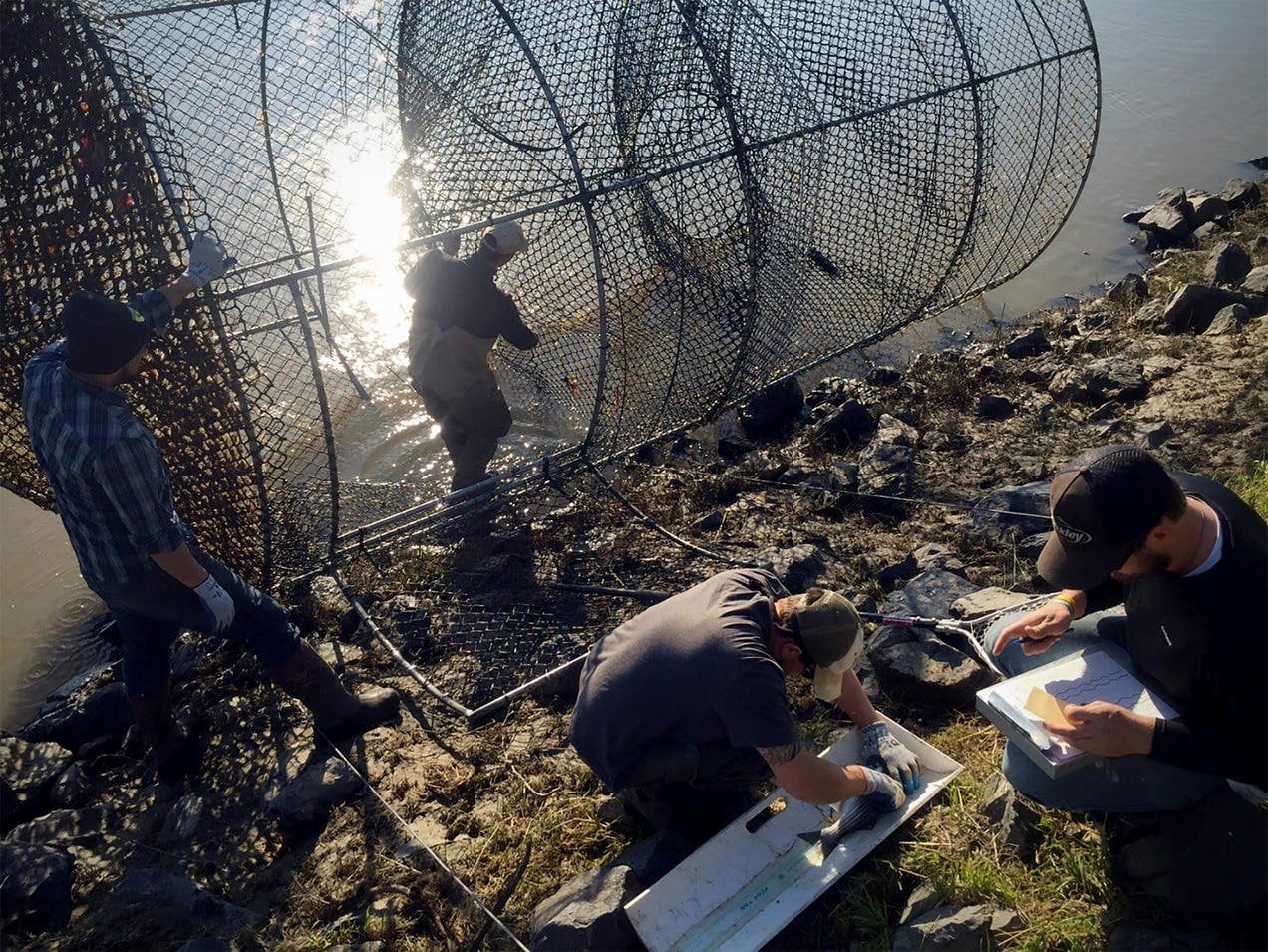 The reason these particular Chinook were among the first to return probably stems from the weather conditions when they were released, said Portz. After years of drought, California was doused with rain and snow in early 2017. “When you have flood flows in California, you have the greatest chance of survival for those fish to make it out to the ocean,” Portz said. The fish are less likely to become stranded in dry areas or spotted by predators in shallow waters.

Portz was thrilled to trap spring-run Chinook — as well as a five-foot-long white sturgeon — in the San Joaquin, but he cautions that much work remains. For instance, physically transporting the returning fish over dams and upstream is not a sustainable model. “We can’t be in the business of moving fish,” he said. “We cannot have a naturally reproducing, self-sustaining population of fish by doing trap-and-haul.”

To meet the terms of the settlement, multiple federal agencies and groups are coordinating to boost water flows in the river and build fish stocks at a newly established conservation hatchery for spring-run salmon recovery. They are also helping fish bypass a number of impassable structures, for example by installing rock-ramp fishways that Chinook and other fish can swim over.

Reconnecting the salmon with their historical habitat in the upper reaches of the San Joaquin might be even more critical in the coming years, said Rene Henery, a fisheries biologist with the nonprofit Trout Unlimited. “The portions of the river that they occupied historically are higher and colder and more likely to remain cold as the climate warms,” said Henery, who has been on the technical advisory committee for the restoration program since 2011. Biologists have affixed acoustic transmitters to several adult Chinook released into the upper river and found that mature salmon gravitate to cool, deeper waters today. They’re currently monitoring the 20 caught fish that survived the return from the ocean this year, along with 78 hatchery-raised adults that were released in May. 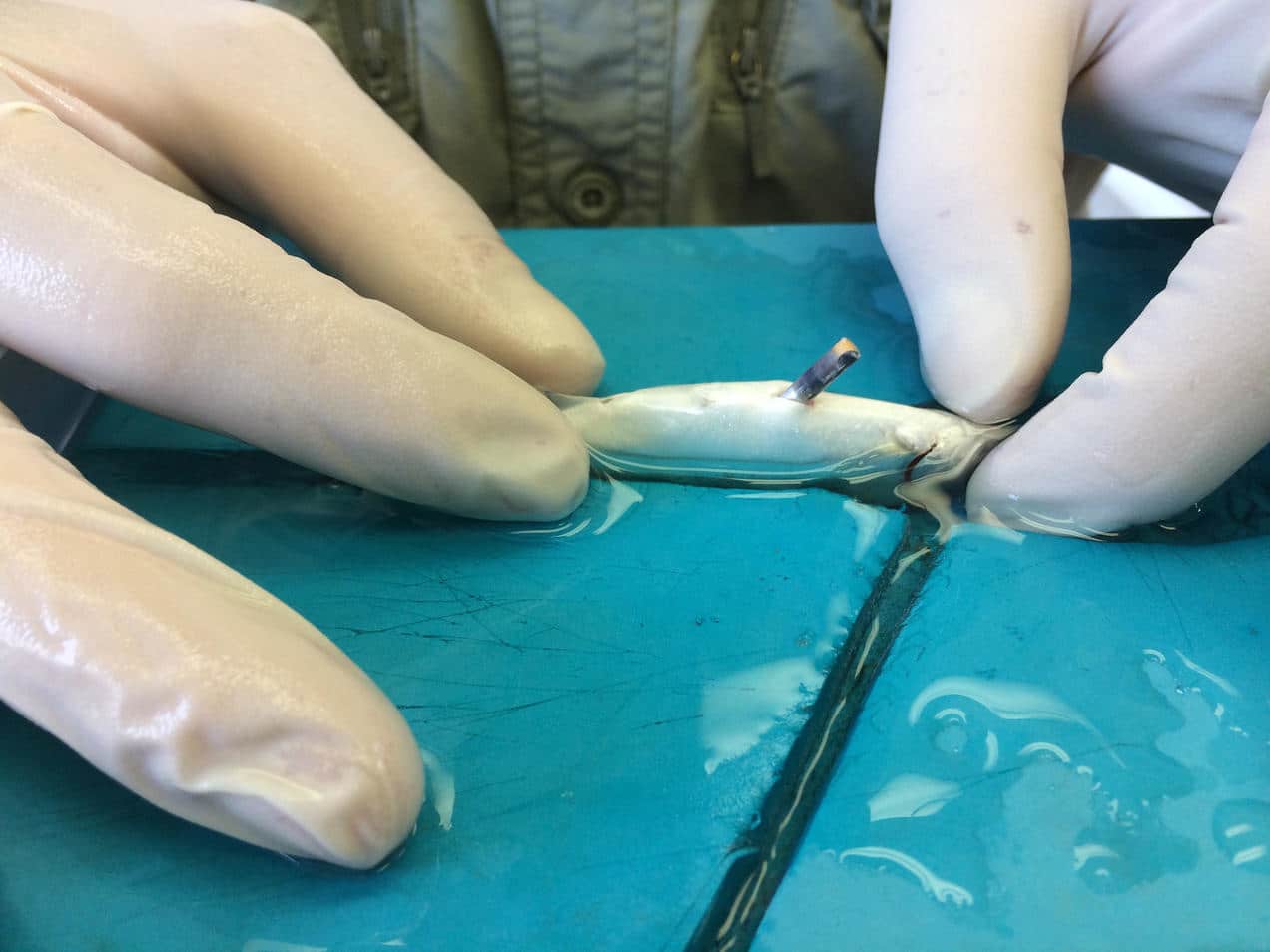 An acoustic tag is implanted in a juvenile to track its movement.

The timing of the salmon runs will also become an increasingly significant factor as temperatures rise, says Henery. Adults that fight their way back up to their breeding grounds in the spring are likely to reach their destination more easily than their fall-run counterparts, which make the trek when water is warmer and shallower — conditions that make an already dicey trip even more dangerous for the exhausted marathoners. At the same time, spring-run juveniles migrate earlier in the year and are therefore less likely to run into those warm temperatures. Henery said, “When you think about the future of salmon in California, the spring-run strategy is a really important part of the salmon portfolio.”

That’s important not just for the fish themselves and the larger ecosystem, but for fisheries, too. After vanishing from the San Joaquin for decades, spring-run Chinook may be uniquely poised to hang on in an uncertain future.