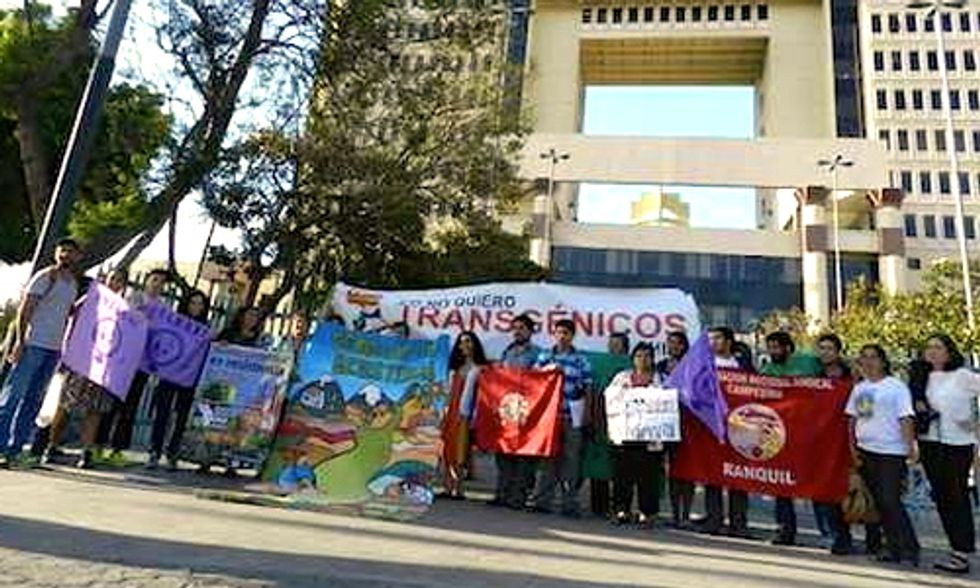 This month, rural women, indigenous communities and farmers in Chile found themselves on the winning end of a long-fought battle against a bill that had come to be known by many in this country as simply, the “Monsanto Law.”

Anti-Monsanto protests have been commonplace in Chile as the multinational company has pushed to privatize seeds for monetary gain. Photo credit: New America Media

The bill, which would have given multinational agribusiness corporations the right to patent seeds they discover, develop or modify, was withdrawn by the Chilean government now controlled by newly elected members of the center-left coalition known as the New Majority, amid concerns that the law would bring harm to the country’s small and mid-sized farmers.

In making the announcement on March 17, new Secretary General Ximena Rincón pledged that the Chilean government will “analyze all that is known in our country and internationally about this issue in order to protect the rights of agricultural communities, small and medium-sized farmers, and the heritage of seeds in our country.”

Rincón has been a leading voice of opposition to the bill in the Chilean government, and part of a larger alliance of approximately fifteen organizations and elected officials across the country who have been lobbying and protesting its passage since the introduction of the bill four years ago.

“We reject this law because it is a threat to family farms and to biodiversity,” said Lucía Sepúlveda from the Alliance for a Better Quality of Life/Pesticide Action Network of Chile.

Last August, her organization and thousands of other Chileans took to the streets of cities across the country in mass protests against the law.

Sepúlveda explained that the Monsanto Law—derived from the International Union for the Protection of New Varieties of Plants (UPOV) 1991 Act—would allow companies to register patents for the vast majority of seeds in Chile, and require small and medium producers to pay those companies for the right to use similar seeds. This, said Sepúlveda, would create a barrier for small and medium producers to use strains of seeds that have been developed and used by farmers and indigenous communities in Chile for generations. Producers would be faced with renewing their seed rights every year for a high price, or leaving agriculture all together.

“We’re left without farmers and without production,” said Sepúlveda.

The steady decline of small and medium–scale agriculture is a growing problem for Chile. While the country is one of the world’s most prolific fruit exporters, many Chileans complain that the main importers of their agricultural goods such as Japan and the United States, have more access to quality produce than Chileans do. Large multinational companies generally produce solely for export, whereas small and medium producers produce for the domestic market, selling their goods at local markets or ferias.

Alicia Muñoz, co-director of the National Association of Rural and Indigenous Women (Anamuri), visited parliament five times during the last year to convince senators to reject the law. Anamuri mobilized women across the country to take a stand for the sake of preserving “food sovereignty.” She described the withdrawal of the bill as a great achievement: “All of the resistance that rural organizations, principally indigenous communities, led during these past years was a success. We were able to convey to the parliament how harmful the law would be for the indigenous communities and farmers who feed us all. Big agriculture, or agro-business is just that, a business. It doesn’t feed our country.”

Muñoz said that further privatization of seeds in Chile would harm the autonomy of small and medium producers. She said that, currently, “they (small farmers) don’t have to depend on a Monsanto, Bayer or a Syngenta to get seeds,” referring to other agri-business giants. The inability of smaller growers to use family-developed and shared strains of seeds, she said, would not only be a financial blow, but would erode what the non-profit organization GRAIN calls Chile’s “genetic heritage.”

“It would erase the history of our grandparents, our ancestors who taught us how to care for and grow our seeds,” explained Muñoz.

Environmental groups joined the fight with organizations like Anamuri because of the bill’s impact on biodiversity. Agri-business companies insisted that the bill would not allow for genetically modified organisms (GMOs), or foods, to be produced for the domestic market in Chile, but activists disagreed. “If the vast majority of seeds in Chile are registered, the traditional species of seeds will fall into disuse,” said Sepúlveda.

GMOs are controversial around the world as environmental and consumer protection groups say they harm biodiversity and violate consumer rights because of their potential health effects. And the long controversy over the Monsanto Law in Chile is just one example of the struggle across Latin America between campesinos, small farmers and the corporate leaders of the global food industry. In Colombia, a national agricultural strike rocked the countryside in 2013 as farmers protested the effects of their own Monsanto Law that was included in a free trade agreement with the United States in 2010. In Argentina, Venezuela and Mexico, seed patenting bills have similarly generated public uproar.

The rejection of the law in Chile is being viewed as a triumph for rural and indigenous communities, yet for Chilean social and environmental activists, the struggle is not over.

“There are three possible scenarios that could occur now,” explains Francisca Rodriguez of Anamuri and the Latin American Coordination of Rural Organizations (CLOC-Via Campesina). “The best would be that the president [Michelle Bachelet] agrees to permanently withdraw the bill.” However, the government could also choose to set up a mixed commission to investigate its impact, which would mean consulting social and environmental organizations as well as corporate organizations. The third and worst option in the eyes of peasant and indigenous rights groups is that the bill could be rewritten and reintroduced by the Agricultural Commission.

“The corporate lobby is large and powerful and they will try to reintroduce the bill,” Rodriguez warns. Corporate stakeholders who seek to privatize seeds and facilitate the spread of GMO crops around the world face widespread resistance in Chile but continue to have the upper hand in terms of political power and wealth.

If the seed patenting law does resurface in Chile, organized groups of women, peasants, and indigenous communities appear ready to continue to defend their rights to seeds and small-scale agriculture.

“We need to keep insisting publically that the president withdraw it for good. We have to continue organizing,” concluded Rodriguez.