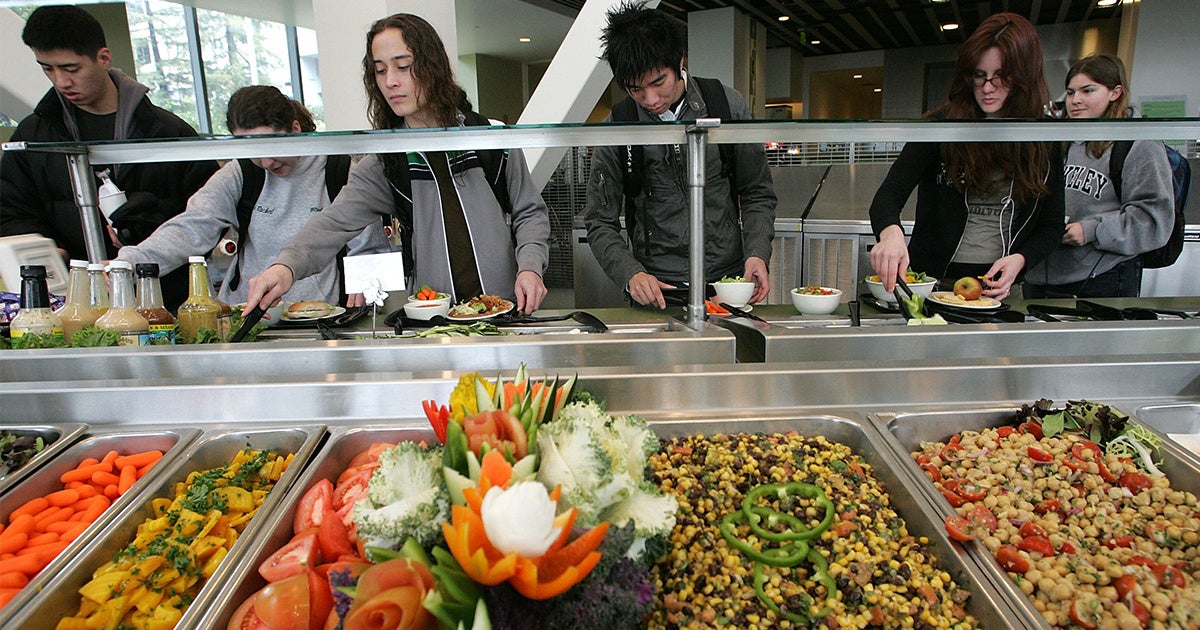 Students at the University of California, Berkeley, which has been offering a certified-organic cafeteria for many years. Justin Sullivan / Getty Images

When Ángel García was little, he often awoke to the smell of breakfast burritos on the stove. His mom would wake up at 4 a.m. to cook for him and pack his lunch before dropping him off with the babysitter by 6 a.m. so she could get to work. She spent her days picking fruits and vegetables on the farmland surrounding their California home. When she returned at the end of a long day, García remembers rushing to her for a hug, but she would shoo him away. She would remind him that chemicals misted down into the fields where she worked — what kind she didn’t know, but she recognized the dangers they posed to her son’s health.

García knew his mom was doing her best to keep him safe. But her powers were limited: Agricultural fields blanketed in pesticides also surrounded Garcia’s school, and the meals her family ate included produce grown with the same toxic chemicals.

“We live in a reality that normalizes heavy chemical use on our food,” said García. He is now an organizer for Californians for Pesticide Reform in Tulare County, where many farmworkers and their families — who are predominantly Latinx — live in unincorporated communities and grapple with various health risks stemming from routine exposure to pesticides. These chemicals show up in the air they breathe, the water they drink and the dust in their homes. They include the widely used pesticide chlorpyrifos, which lurks on many of our fruits and vegetables, and which scientists have linked to developmental delays and increased risk of learning disabilities in children.

García’s organization is one of more than 100 that have joined forces with NRDC and the Community Alliance with Family Farmers (CAFF) to support the California Organic-to-School Pilot Program, introduced in AB 958. If the bill passes, the program will help schools buy more California-produced organic food and grant up to 15 cents more per meal to qualifying schools. The Office of Farm to Fork at the California Department of Food and Agriculture would distribute the pilot program funds through a competitive grant application process to at least five school districts, enabling them to purchase organic food as soon as the 2020–21 school year.

Advocates like García are encouraged thus far by the response to the bill, which received universal support by members of the Committee on Agriculture at a State Assembly hearing in April. “A policy like this sends a message to children that there is another way of growing food, that it doesn’t have to depend on chemicals,” García said. “Organics shouldn’t be something seen as expensive, or something you can only find at certain locations, or something seen as inaccessible to them.”

Allison Johnson, a sustainable food policy advocate at NRDC, agrees. “We really think everyone should have access to food that will make them healthy, food that is culturally appropriate, and food that won’t hurt them in the long term — especially kids,” she said. The program would particularly benefit those communities that are in close contact with agricultural pollution, and often the least able to afford healthy food options.” All-organic diets have been shown to decrease levels of pesticides in people’s bodies in as little as six days. “The effects of the food that we produce now will be with them for their lifetime,” Johnson said.

The bill’s authors noted that the first handful of grants should give priority to schools in districts that serve a high number of low-income students who receive free or reduced-price meals. It’s an especially important approach given that for some children and teens, school lunch may the single reliable meal of their day, said Jennifer LeBarre, executive director of Student Nutrition Services for the San Francisco Unified School District. Despite this reality, school districts receive very limited state and federal funding to feed students, and the little they do get must also go toward food service operations and staffing. In the end, many schools spend as little as .25 on the food for each child’s lunch — and few can afford to serve organic produce, let alone a fully organic meal.

LeBarre adds that school districts pay their food service workers higher wages and offer better benefits than the typical burger joint — part of the reason why the money spent on the ingredients themselves is so minimal. “The costs are higher when it comes to operating in the school food environment than, say, a McDonald’s, and we certainly want to be bringing better food to our students than what you would receive at a fast-food restaurant,” she said.

Organic strawberries and avocados are already on the menu in school lunchrooms in Encinitas, just north of San Diego. In 2012, the nonprofit Healthy Day Partners established the first certified-organic elementary school campus in the country there, and the group has influenced local farmers to grow more organic produce. The city even designated a neighboring park to go organic, too. The organization’s CEO and president, Mim Michelove, said, “One of the things that I love about AB 958 is that it supports what we all know: Healthy kids are better students.”

In recent years, schools have moved resources from food and kitchen budgets to technology like classroom smart boards and computer labs. When stocking the Encinitas salad bar with organic produce, Michelove learned the school was just not set up to receive fresh food. Instead, it specialized in packaged and processed goods. Healthy Day Partners teamed up with the district to set up best practices for preparing farm-fresh produce in the central kitchen and purchased some simple and affordable equipment to help clean and cut the food.

In addition to the health benefits of serving more organic meals, the new initiative will help boost the state economy. After all, as Michelove points out, “California leads the nation in the number of organic farms.” Because the new items on the school lunch menu can be sourced locally, they will “reduce the carbon footprint of school lunches” and offset the need to truck in food from farther away. “The overall food system around school food can be transformed into one that promotes quality-of-life issues that go beyond healthy food and healthy kids to include things like cleaner air and water for us all,” she said.

Growers will also reap benefits. Organic food is often more expensive than conventional food, in part because many organic farmers lack stable markets for their produce and must take on economic risks and technical challenges associated with growing crops without pesticides, not to mention additional labor costs. But the bill would help public schools, which purchase huge amounts of food, provide stable markets for organic growers. “We can use policy tools like this bill to ensure that farmers and workers are paid fairly for producing organic food and that the food remains affordable for everyone,” Johnson said. “Organic farming can also offer a way for farms to stay in business — more than half of farms in the United States lose money, and fairer prices for organic food can help farms stay afloat.”

While the economic upsides of the bill may excite many people, LeBarre is most thrilled by the prospect of getting more pesticide-free food onto the plates of California’s kids. “I want organic food for our students because it’s the best for them, and it’s the best for the environment, and they’re the ones who are going to be living on this planet long after I’m gone,” she said. “It’s my responsibility to do everything I can for them now, but also be forward thinking as well.”