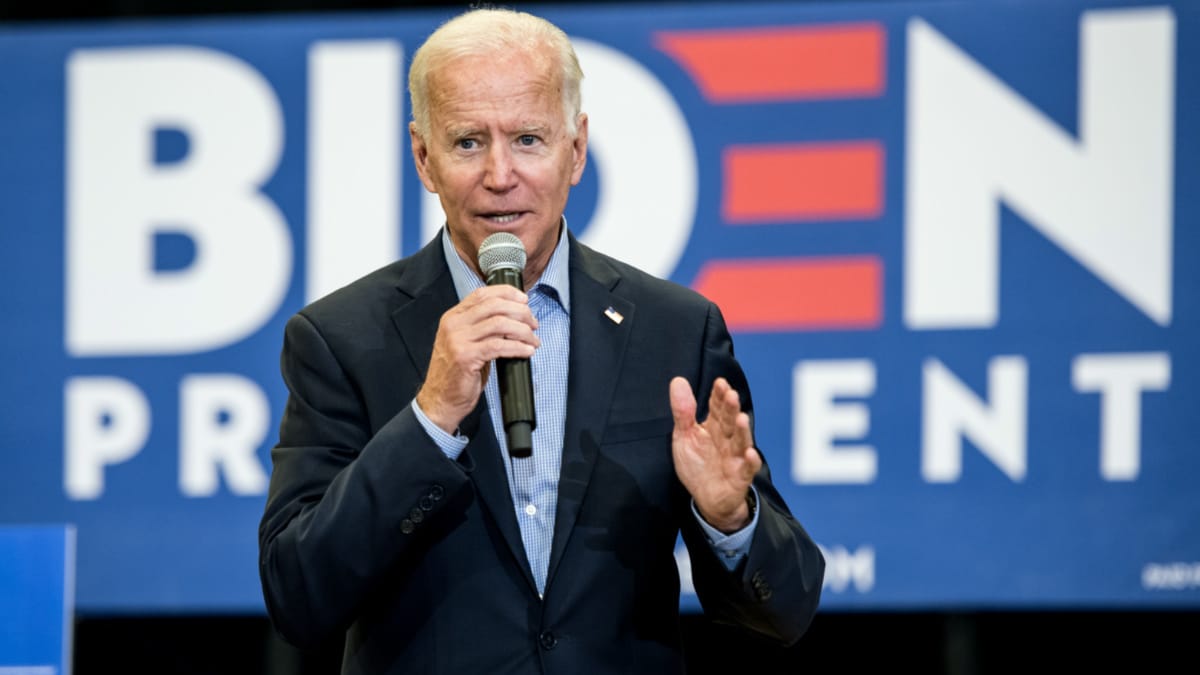 At the first presidential debate on Tuesday night, former Vice President Joe Biden said point-blank that he does not support the Green New Deal — a progressive plan which not only aims to aggressively tackle climate change but also encompasses many other issues like social justice, jobs, housing and health care.

In response, President Trump pounced on what appeared to be an opportunity to underscore that point to Biden’s base, saying, “That’s a big statement… you just lost the radical left.”

But this was not actually a new position for Biden. Instead, he explained, “I support the Biden plan that I put forward” — a trillion proposal that is more narrow and less aggressive than the far-reaching Green New Deal.

Their exchange reveals the needle that Biden is threading in his campaign, between trying to win the confidence of climate crusaders on the left while not alienating more moderate voters in the middle.

Although it is true that Biden’s climate plan does not fully match the Green New Deal, there are many similarities. That’s because over the last few months the Biden campaign made a deliberate effort to consult with more progressive factions of the party through the Biden-Sanders Unity Task Force, a committee which included climate and environmental justice activists like the Sunrise Movement — a group instrumental in the design of the Green New Deal. Biden has committed to some, but not all, of the task force’s recommendations.

“Joe Biden’s climate plan isn’t everything, but it isn’t nothing at all,” Varshini Prakash, the founder of Sunrise Movement, told CBS News in an interview for the recent CBSN special “Climate in Crisis.” She said if he is able to make good on those promises, it would represent a “seismic shift in climate policy at the federal level.”

As a result of the task force’s work, Biden’s climate plan was boosted from .7 trillion over 10 years to a much more substantial trillion over four years, with a faster timeline to achieve a carbon-free electricity sector and a greater focus on environmental justice.

“I think that Biden has done a good job of responding to pressure from the climate movement,” said Professor Leah Stokes, an energy and environmental politics expert at the University of California at Santa Barbara, who is very active in the climate policy arena and plugged into the progressive wing of the climate community. “The Unity Task Force was set up explicitly to accomplish this goal — and it was extremely successful.”

The careful wording on Biden’s campaign website is revealing. It says “Biden believes the Green New Deal is a crucial framework for meeting the climate challenges we face” — an acknowledgment but not an embrace.

In contrast, Biden’s climate plan would lay out trillion over 4 years towards clean energy and infrastructure, which he says will create “millions” of jobs and move the U.S. closer to a carbon-free future. (For comparison, the cost, while expensive, it is still short of the one-year, .2 trillion price tag for U.S. coronavirus stimulus measures to date.)

Biden’s plan is also much more narrowly focused than the Green New Deal, which envisions broader reforms across the U.S. economy. For instance, the Green New Deal includes a goal of “providing all people of the United States with high-quality health care” — an issue that is not addressed in Biden’s climate plan.

However, like the Green New Deal, Biden’s plan is aggressive in addressing climate change while also attempting to tackle other related issues such as environmental justice, sustainable housing, supporting a “just transition” for workers whose jobs are affected, and the building of major infrastructure projects such as high speed rail, which is mentioned in both proposals.

At their core, both the Green New Deal and Biden’s climate plan are about jobs as well as the environment. They both place an emphasis on supporting labor unions’ right to organize and bargain for fair wages for their members. The Green New Deal sets a goal of providing a guaranteed job with a family-sustaining wage and benefits to every American — but Biden does not go that far.

Biden’s jobs plan is big, but not as comprehensive as the Green New Deal’s. He pledges to create millions of new jobs by retooling the auto industry for low-emission vehicles, building infrastructure for a green future, upgrading millions of buildings to be more energy efficient, constructing 1.5 million new sustainable housing units, and cleaning up pollution from oil and gas wells and coal mining sites.

“When Donald Trump thinks about climate change, he thinks ‘hoax.’ I think ‘jobs’,” Biden has said. He aims to provide additional jobs out of the pandemic by boosting this green energy economy.

Climate change is also expected to continually increase major stresses on America’s already aging infrastructure. To address this, both plans call for major investments to, as the Green New Deal puts it, “meet the challenges of the 21st century.” Biden’s plan calls for making “smart infrastructure investments to rebuild the nation and to ensure that our buildings, water, transportation, and energy infrastructure can withstand the impacts of climate change.”

However, on housing, Biden’s proposal to build 1.5 million new sustainable housing units is far short of the lofty ambitions of the Green New Deal, which calls for “providing all people of the United States with affordable, safe, and adequate housing.”

On emissions reductions, Biden’s plan calls for a carbon pollution-free U.S. power sector by 2035, with net-zero emissions throughout the economy by 2050. The Green New Deal’s timeline is more aggressive, calling for a 10-year national mobilization to generate “100 percent of the power demand in the United States through clean, renewable, and zero-emission energy sources.”

Both the Green New Deal and Biden’s plan call for overhauling the American transportation industry to reduce pollution and greenhouse gases by creating more public transit and pushing the country toward more hybrid and electric cars. Biden’s plan puts forth proposals like giving Americans rebates to trade in gas-guzzling vehicles for more efficient American cars, incentivizing auto companies to offer more zero-emission vehicles, and investing in 500,000 electric vehicle charging stations, among other ideas.

One area where Biden’s position has differed more significantly from environmental activists — and many of his rivals in the Democratic presidential primaries — has been on fracking.

Fracking, short for hydraulic fracturing, is a drilling method for extracting natural gas from shale formations underground by injecting liquid at high pressure. Since 2005, the use of fracking in the U.S. has grown exponentially. Some energy experts forecast the U.S. will be the world’s top exporter of natural gas within the next few years.

While the Green New Deal does not explicitly mention anything about fracking, its timeline to cut emissions from the power sector is so rapid that eliminating fracking is implied in the proposal. Banning fracking has certainly been a priority among climate activists.

However, fracking is a substantial source of jobs and revenue in the crucial swing state of Pennsylvania, where some 32,000 workers are employed in the fracking and natural gas industry. Biden told voters there in July that fracking “is not on the chopping block,” though his campaign says he supports no new fracking on federal land.

“It is not surprising that Biden said he doesn’t support a Green New Deal. He has a climate plan that’s in line with science — but he has never vocally supported a GND,” says Emily Atkin, a popular climate journalist who writes and hosts HEATED, a newsletter and podcast followed closely by many progressive climate crusaders. “This is completely in line with who he said he was. Also, he’s trying to win Pennsylvania.” (According to the latest CBS News Battleground Tracker poll, Biden currently leads President Trump in the state by 5 points.)

Though he’s faced some criticism over fracking from the left, it has been far more muted than one might expect, perhaps because green activists realize how much worse their chances will be if Mr. Trump is reelected. So far, according to a tally by Columbia University’s Sabin Center for Climate Change Law, the Trump administration has taken steps to roll back 162 climate related regulations.

A hallmark of the Green New Deal is its emphasis on environmental justice, to help remedy inequities which leave minority, low-income and Indigenous communities disproportionately affected by pollution and the impacts of climate change.

Biden’s plan directs 40% of its spending to historically disadvantaged communities, and calls for the establishment of an Environmental and Climate Justice Division at the Justice Department to prosecute anti-pollution cases.

The bottom line is that while many of the concepts in the Green New Deal are also addressed in Biden’s climate plan, generally speaking the Biden plan is more narrowly focused and less expensive.

Professor Stokes says it seems to be a bargain most progressives can live with in this election.

“We have a choice right now between our current president, a climate denier, and our former vice president, someone committed to climate action at the scale of the crisis,” she told CBS News. “Biden has the most aggressive climate change plan of any presidential candidate in U.S. history.”