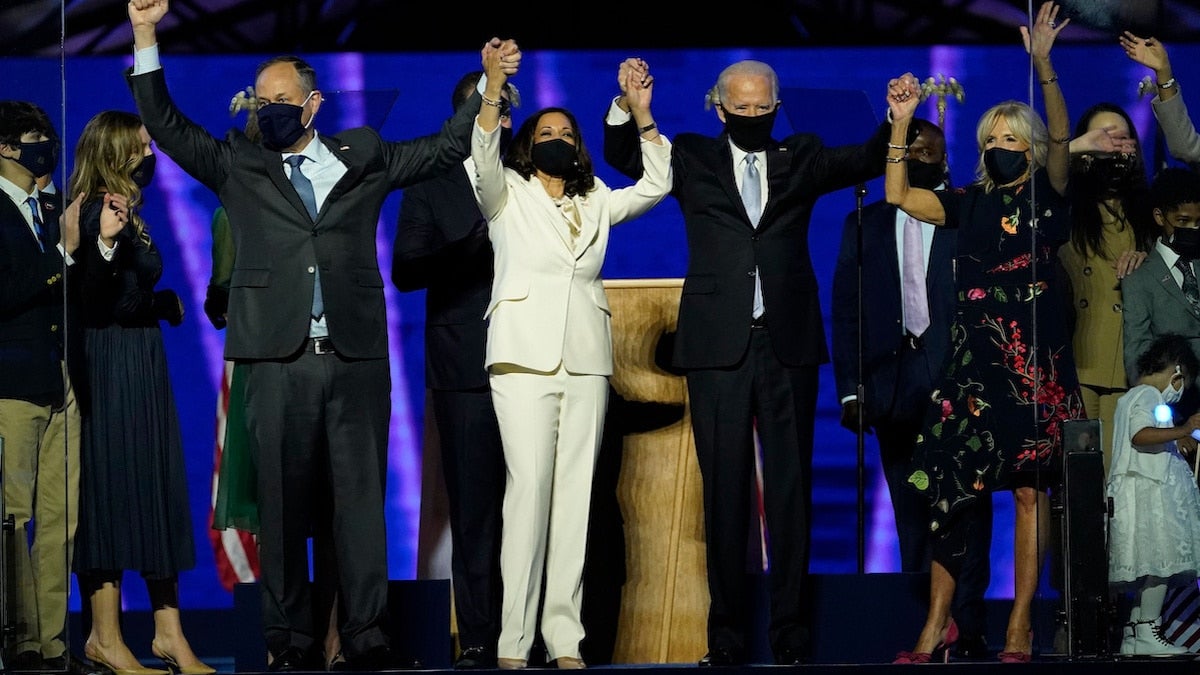 President-elect Joe Biden and Vice President-elect Kamala Harris salute the crowd after being declared the winners of the presidential election on Nov. 7, 2020 in Wilmington, Delaware. ANDREW HARNIK / POOL / AFP via Getty Images

The election results, reported by several outlets including The Associated Press, pave the way for a dramatic shift in U.S. policy on the climate crisis and the coronavirus pandemic. While Trump repeatedly denied the reality of climate change and downplayed the severity of COVID-19, both Biden and Vice President Kamala Harris emphasized tackling the two crises with a science-based approach during their victory speeches Saturday.

In his speech, Biden promised to hit the ground running on controlling the pandemic, which has killed more than 237,000 U.S. residents and infected nearly 10 million, according to The Associated Press. He said he would name a group of public health experts Monday to be ready to guide his administration’s coronavirus response once he takes office Jan. 20.

Other notable members include surgeon and writer Dr. Atul Gawande and former Trump administration whistleblower Dr. Rick Bright. Bright was reassigned from his position at the Health and Human Services Department after he objected to Trump’s pushing of the anti-malarial drug hydroxychloroquine as a potential treatment for COVId-19.

“The inclusion of Bright, who said that he was met with skepticism by Trump administration officials when he raised concerns in the early throes of the pandemic about critical supplies shortages, is a clear signal of the contrasted direction that Biden intends to take his administration when it comes to dealing with the pandemic,” CNN’s Sarah Mucha pointed out.

Biden is also expected to reverse Trump’s departure from the World Health Organization upon taking office, The Washington Post reported.

Even before a winner was declared in the election, Biden reaffirmed his commitment to rejoining the Paris climate agreement on the first day of his presidency. His win means the Trump-initiated U.S. departure, which went into effect Tuesday, will be short lived.

For anyone who doesn't know, @CFigueres Christiana Figueres is a key architect of the Paris climate accords, which have a new lease on life.
It's a start. https://t.co/R4LOKKTmM9

Biden’s climate plan includes a trillion dollar investment in greening infrastructure and achieving a zero-carbon energy sector by 2035, The Washington Post reported further. However, this will be difficult to pass if Republicans maintain control of the Senate, something which will be decided by two run-off elections in Georgia in January. If the Senate stays in Republican hands, Biden will have to rely more on executive actions to fulfill his climate agenda. He has promised to reverse the Trump administration rollback of 100 Obama-era environmental and public health regulations. He can limit oil and gas drilling on public lands, restore federal vehicle emissions standards and stop fossil fuel pipelines such as the controversial Keystone XL from being built, among other measures.

“Joe Biden ran on climate. How great is this?” Obama-era Environmental Protection Agency head and current Natural Resources Defense Council leader Gina McCarthy told The Washington Post. “It’ll be time for the White House to finally get back to leading the charge against the central environmental crisis of our time.”

There is evidence that Biden really does have a climate mandate from voters: 74 percent of Biden voters said that the climate crisis was a very important factor in their choice, according to Morning Consult.

Climate was also a key issue for the young voters who turned out for Biden by a large margin and may have played a deciding role in battleground states, as InsideClimate News reported.

“I fundamentally believe this is the first climate election, as far as climate playing a huge role during the election even with everything else going on,” Climate Power 2020 Executive Director Lori Lodes told E&E News. “There’s not going to be another election in U.S. history, another presidential election, where climate does not play as big or bigger of a role. This is only the beginning.”