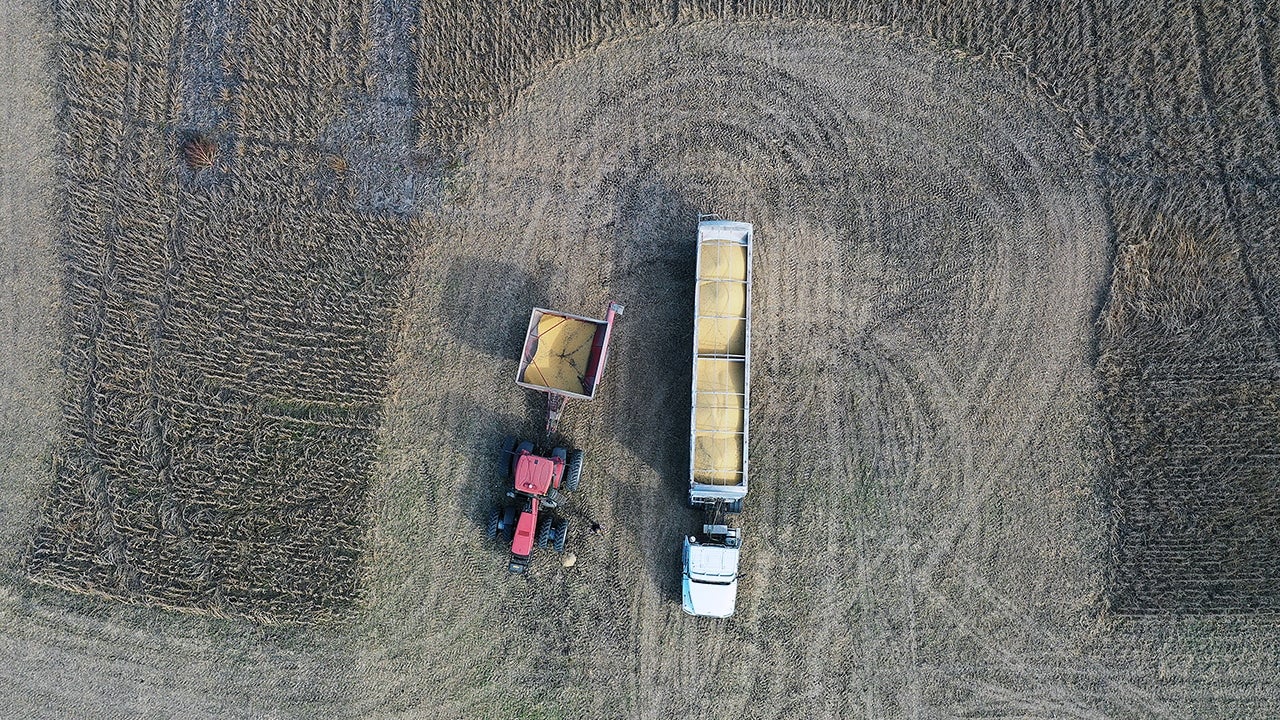 An aerial view from a drone shows an auger cart being used to transfer soybeans to a transport truck in a field at the Bardole & Son's Ltd farm on October 14, 2019 in Rippey, Iowa. Joe Raedle / Getty Images

The staggering number of food and farm workers who have died from Covid-19 has laid bare the Trump administration’s disastrous policies on food and farm issues.

President Trump’s failure to provide these workers with protections from the coronavirus was the latest bad decision that made our food and the people who produce it less safe, increased hunger, increased the health care costs caused by poor diets and the pollution caused by farms, and made it harder for all Americans to decide how to feed their families.

Now President-elect Biden has a chance to change course. Here’s what should be on the menu.

First, Biden should make it a priority to end hunger. As a result of the pandemic, millions more are facing hunger, including one in five children.

The Trump administration has actually been undermining programs to alleviate hunger. Last year, the Department of Agriculture proposed to kick nearly 700,000 people out of the Supplemental Nutrition Assistance Program, or SNAP, as well as implementing other rules designed to reduce participation in the program, commonly known as food stamps. Just weeks before the election, the administration went to court to block pandemic food aid for the poor.

Biden has pledged to increase the standard SNAP benefit by 15 percent, supports free school meals and wants to rescind rules that limit participation in anti-hunger programs. But increasing SNAP benefits and participation alone will not end hunger. A Biden administration must also address income and housing challenges.

Second, Biden should make it a priority to protect food and farm workers from Covid-19. According to the Food and Environmental Reporting Network, at least 72,000 of these workers have gotten sick and 327 have died.

Biden has said, “[N]o worker’s life is worth me getting a cheaper hamburger,” and pledged to support policies that protect workers from Covid-19, expand their ability to organize, and provide a minimum wage. To make good on his pledge to protect workers threatened by Covid-19, the Occupational Safety and Health Administration, or OSHA, must quickly require basic personal protections for workers, boost enforcement and ensure that workers have safe housing and transportation. When food and farm workers get sick from Covid-19, they should receive sick pay so they can stay home. And when they take risks to keep us fed, those risks should be rewarded through premium pay.

Third, Biden should make it a priority to support healthy diets.

Poor diet is now the leading cause of Americans’ death, and obesity rates continue to climb, increasing health care costs. The diseases caused by poor diets – such as diabetes, hypertension and cardiovascular disease – have significantly increased the risks posed by Covid-19.

As a candidate, Biden has not had much to say about diet. But food leaders have had a lot to say about steps we can take to support healthy diets. And Vice President-elect Kamala Harris has been an outspoken supporter of food policy reforms designed to improve our health. For starters, a Biden-Harris administration should immediately restore tough standards for food sold in schools.

Fourth, Biden should revamp Trump’s farmer bailout programs to help farmers in real need and restore rules that ensure a farmer gets a fair price.

Trump’s policies have been a disaster for farmers. His trade war closed markets that had taken decades to open. His bailouts have favored the wealthiest farmers at the expense of family farms, and rules designed to ensure that farmers get a fair price have been shelved. His inhumane immigration policies have created labor shortages that have harmed both farmers and food manufacturers.

The modest tweaks to ethanol programs Biden has proposed won’t make a difference to most farmers. His agriculture secretary must rescind and rewrite the rules for the USDA’s Covid-19 response programs to help farmers facing economic ruin and reform other farm subsidy programs to level the playing field for family farmers.

But that’s not all. President-elect Biden should also make good on his plan to address long-standing and ongoing discrimination against Black farmers. Farm subsidy reform alone will not be enough to address the long legacy of racial discrimination in farm programs. We must also transform the culture at the USDA, provide land and credit to Black farmers and lift the veil of secrecy that hides the racial makeup of farm subsidies.

Fifth, Biden should make it a priority to keep our food safe.

Contaminated food kills more than 3,000 Americans a year, and a recent audit shows no progress is being made to reduce foodborne illness. But Trump’s Department of Agriculture eliminated a requirement to clean hog carcasses, increased line speeds at meat-processing plants and deregulated food safety inspections. His Environmental Protection Agency reversed a ban on chlorpyrifos, a pesticide linked to brain damage in children, and extended the life of dicamba, another toxic pesticide.

Biden should immediately restore the ban on chlorpyrifos and reverse other Trump administration decisions that fail to protect consumers and farmworkers from pesticides. But the Biden-Harris administration should go further and fix our broken system for reviewing the safety of pesticides and other chemicals in food.

We must also do much more to reduce foodborne illness. We must not only require growers to test irrigation water for pathogens but also combat the growing threat of pathogens in meat and poultry. We must address these risks where they start – in the massive confined feedlots that have taken over much of farm country.

Sixth, the new agriculture secretary should immediately declare a climate emergency and use the resources of the Commodity Credit Corporation to reward farmers who reduce emissions and permanently store carbon in the ground.

Farmers can play a much bigger role in efforts to reduce greenhouse gas emissions. Historic storms have placed farmers on the front lines in the fight against the climate crisis, and legislators have proposed bold ideas to reward farmers who take meaningful and measurable steps to address it. Expanding and reforming voluntary farm stewardship programs to make the climate crisis a top priority and linking farm subsidies to a basic standard of environmental care will also help keep our drinking water clean and safe.

The Covid-19 crisis has shined a spotlight on Trump’s food and farm policy failures. Workers are getting sick, and our food supply chains are being tested. Trump’s policy failures have also made more consumers sick and pushed many farmers to the brink of financial ruin. A Biden-Harris administration can ­– and should – do better.

Scott Faber is the Senior Vice President of Government Affairs at the Environmental Working Group.