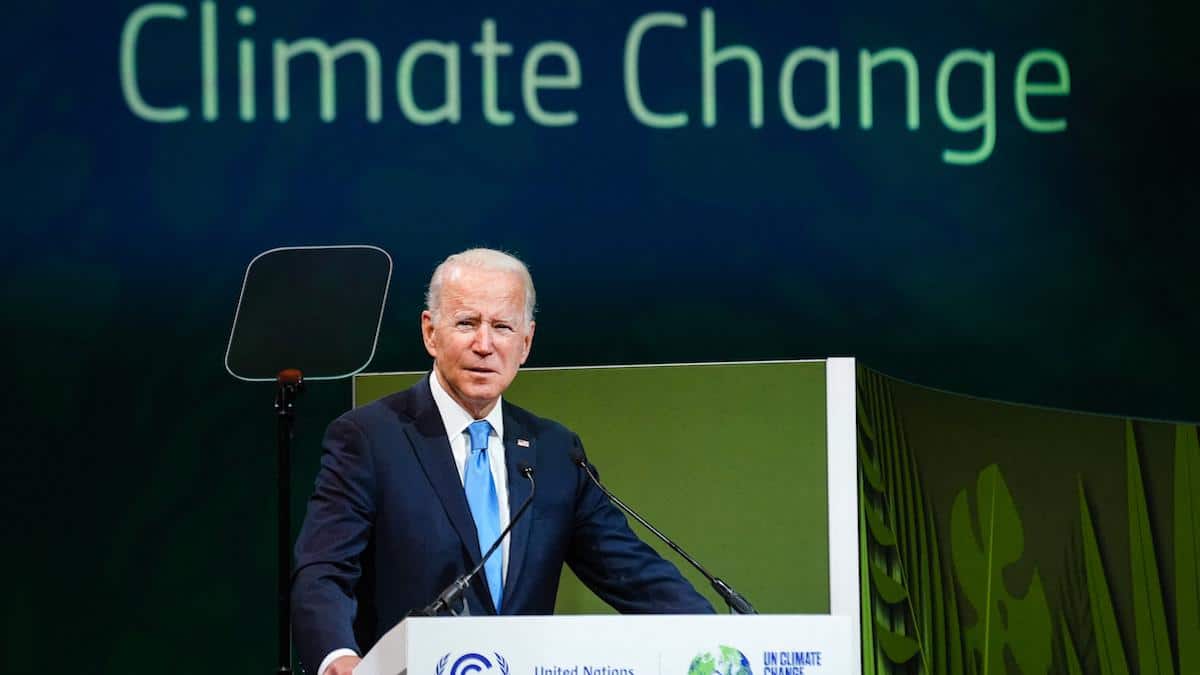 “The executive order will reduce emissions across federal operations, invest in American clean energy industries and manufacturing, and create clean, healthy, and resilient communities,” the White House said in a statement.

“It’s a similar strategy to what China is doing so successfully, leveraging the purchasing power of their government to create demand that markets can meet,” said Joshua Freed, senior vice president for climate and energy at Democratic research group Third Way, The New York Times reported.

The Biden administration’s efforts to reduce the federal government’s carbon emissions could have a ripple effect across the economy, said Sarah Bloom Raskin, Duke University law professor and former deputy secretary of the U.S. Department of the Treasury under President Obama, in a recent interview, according to The Washington Post.

“The government is a significant driver of demand,” Bloom Raskin said. “It doesn’t tell the private sector entities what to do, but to some extent it will demand a certain kind of good and service so companies can shift what’s being made,” Bloom Raskin said.

“As the country’s largest employer, the federal government has about $650 billion in annual purchasing power for goods and services, the White House said. That makes the government and its purchasing plans significant factors for businesses and manufacturers looking for lucrative contracts as they decide what products to offer,” reported Josh Lederman of NBC News.

“The White House hopes that as manufacturers scale up production of clean technologies to meet the government’s future needs, the cost of such products and services will decrease, making them more affordable for families and businesses in the private sector,” Lederman reported.

As procurement rules, the executive order can go into effect almost immediately, without having to be subject to a long regulatory process, said Richard L. Revesz,, professor of environmental law at New York University, as reported by The New York Times.

A future administration could still reverse the order, however, and Republicans are already denouncing the Biden administration’s plan.

“Senator John Barrasso of Wyoming, the top Republican on the Senate Committee on Energy and Natural Resources, denounced it as ‘disgraceful’ and said the plan would harm workers in the fossil fuel sector,” Lisa Friedman of The New York Times reported.

“In converting its power to wind, solar and other sources that don’t produce planet-warming emissions, the government intends to follow the path set by companies like Google, Apple and Wal-Mart, which established tariffs or developed power-purchase agreements with local utilities to achieve their goals of 100 percent renewable energy, a senior administration official said,” The New York Times reported.

“By the end of next year, the Pentagon plans to complete one of the country’s largest solar panel arrays, a 520-megawatt project on Edwards Air Force Base in Southern California. The administration estimates the project will create about 1,000 union construction jobs,” reported Phillips of The Washington Post.

However, according to environmental groups like the Center for Biological Diversity, the executive order doesn’t do enough.

Bill Snape, senior counsel at the nonprofit, and others “called on the administration to do more, faster, and said they were frustrated by the legislative pace of the spending bill, which Mr. Biden has called his Build Back Better plan. Activists said they found the administration’s commitment lacking in light of a decision last month to open more than 80 million acres in the Gulf of Mexico to oil and gas drilling,” The New York Times reported.

“Biden can’t use this one executive order to cover up the fact that Build Back Better, our best chance at meaningful climate legislation in his administration, has not passed,” Sunrise Movement campaign director Deirdre Shelly said, as The New York Times reported. She further urged Biden to “stand up against the fossil fuel industry.”