Up to 10,000 Camels Are Being Shot and Killed Amid Australia Drought 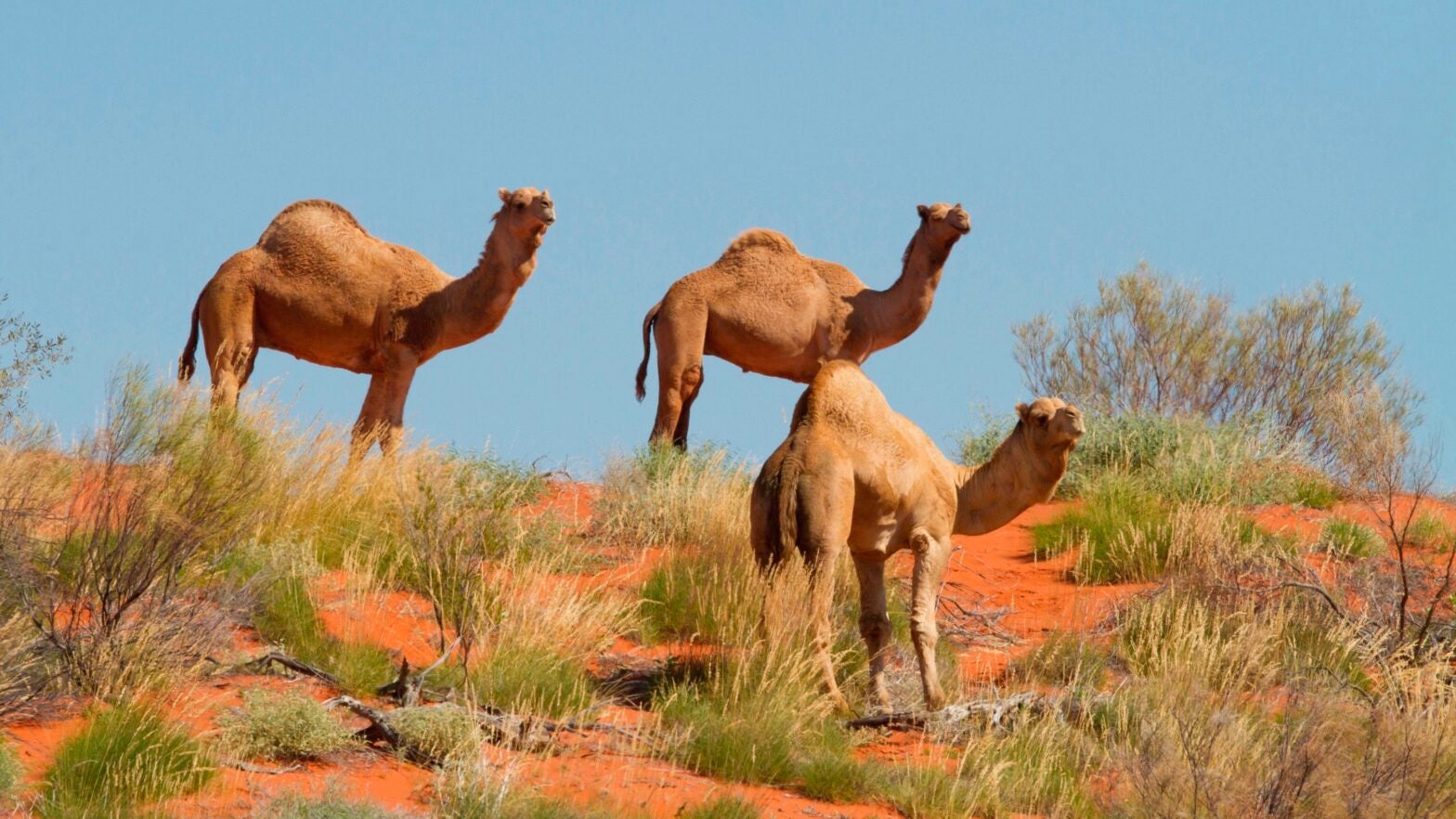 Feral camels on a sand dune in Australia. Up to 10,000 are being slaughtered in Australia. Auscape / Universal Images Group / Getty Images

Aboriginal officials in Australia approved the rounding up and killing of up to 10,000 camels because of drought conditions, claiming that the thirsty camels are drinking up too much of a dwindling water supply, as CBS News reported.

The officials in the sparsely populated part of the northwest corner of South Australia said in a statement that the wild camels are endangering locals and pastoral lands as they struggle to find water during Australia’s prolonged drought and blistering heat.

The hunting of the camels on Anangu Pitjantjatjara Yankunytjatjara (APY) Lands began today and will continue for five days. The statement did say that other feral animals are also hunting for water, but the camels are the primary target of the cull. Some feral horses will also be killed, according to the BBC.

“With the current ongoing dry conditions [and] the large camel congregations threatening the APY communities and infrastructure, immediate camel control is needed,” APY said on Facebook, as USA Today reported.

Australia’s Department of Environment and Water is sending sharpshooters to the aboriginal lands to cull the camel, according to the BBC.

“We have been stuck in stinking hot and uncomfortable conditions, feeling unwell, because all the camels are coming in and knocking down fences, getting in around the houses and trying to get water through air-conditioners,” said APY Executive Board Member Marita Baker who lives in the community of Kanypi, as the BBC reported. “They are roaming the streets looking for water. We are worried about the safety of the young children.”

Camels are not native to Australia, but were brought by British settlers from India, Afghanistan and the Middle East in the 19th century, according to the BBC.

While an exact number of camels roaming through the central, desolate parts of Australia is unknown, it is estimated that they number into the hundreds of thousands and there may be up to 1.2 million. Their numbers are rapidly growing, according to CNN.

The camels not only drink water that is needed by people, plants and livestock, but damage fences, farm equipment, and settlements, according to the BBC.

“This number is only 1 percent of what is currently destroying the fragile Australian [fauna] and flora,” said Richard King who manages APY Lands to CBS News. He added that the aim of the cull is to protect community members and native plant life.

The Department of Environment and Water told CBS News that the camels are gravitating towards any available water source, including tanks and taps.

“This has resulted in significant damage to infrastructure, danger to families and communities, increased grazing pressure across the APY Lands and critical animal welfare issues as some camels die of thirst or trample each other to access water,” a spokesperson said to CBS News. “In some cases dead animals have contaminated important water sources and cultural sites.”

The APY Lands, which are about the size of Kentucky, are home to roughly 2,300 people, according to CNN.

Without culling, the camel population would double every 8 to 10 years. However, the desperate search for water has led to several problems in the area, according to a spokesperson for the South Australia Department of Environment and Water.

“This has resulted in significant damage to infrastructure, danger to families and communities, increased grazing pressure across the APY lands and critical animal welfare issues as some camels die of thirst or trample each other to access water,” the spokesperson told news.com.au. “In some cases, dead animals have contaminated important water sources and cultural sites.”

The camel carcasses will be left to dry off before they are burned or buried, as the Australian Broadcasting Corporation reported.