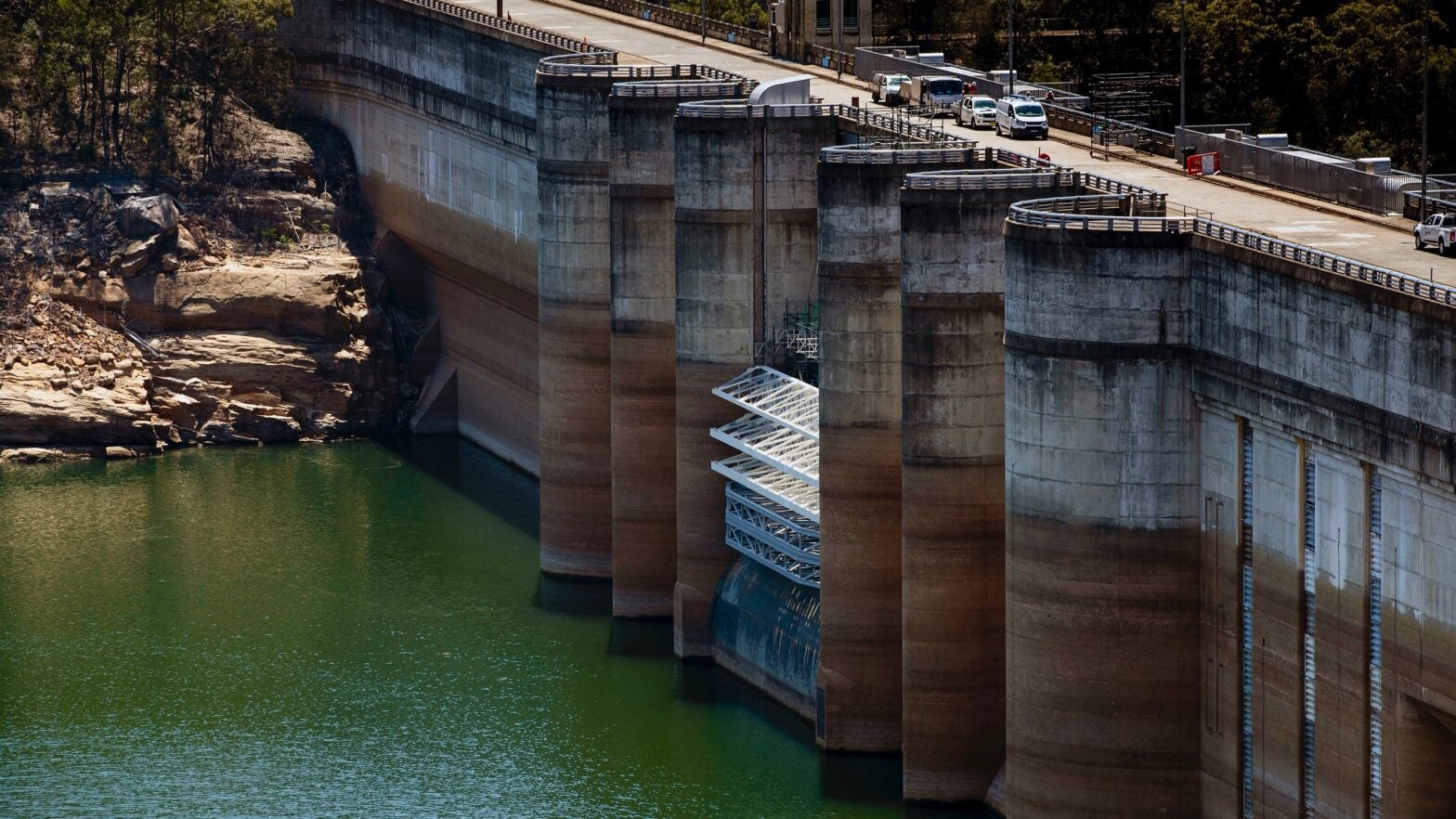 A general view of Warragamba Dam on Oct. 23, in Sydney, Australia. Sydney's dams could fall to just 40 percent of their capacity by late December. Brook Mitchell / Getty Images

New documents show that government officials for New South Wales were warned six months ago that Sydney’s water levels would reach emergency levels after the Australian summer and they should act immediately, as The Guardian reported.

Officials who saw the document looked at historical trends and used the 1939 drought as a model course of action rather than account for the city’s massive population growth and the demands for water spurred by the climate crisis.

“It’s grossly negligent for the government to be planning for water security based on historical trends. Unless they factor in reduced water availability under a hotter climate we don’t stand a chance,” said Cate Faehrmann, the NSW Greens’ water spokeswoman, as The Guardian reported.

The document, titled Drought Supply Options Study, from six months ago warned that the water levels in Sydney’s dams could fall to just 40 percent of their capacity by Christmas and may be down to 35 percent by May if the summer in Australia is hot and dry and the drought continues, according to The Guardian.

The document warned that action was required before the water supply fell below 30 percent, according to the Sydney Morning Herald, who obtained the Drought Supply Options Study.

“We won’t know when our depletion target [of 30 per cent] will be reached, but there may not be enough time to wait and see,” the document said, as the Sydney Morning Herald reported. “There will be critical supply issues when storages fall below 30 per cent and critically – the potential inability to meet restricted demand below 15 per cent.”

The Sydney water supply, which was 96 percent full in April 2017 and is now 46 percent full, has depleted rapidly at an unprecedented level, which requires immediate action rather than waiting. The study found that water flowing into the dams has been at the lowest rate on record for the last two years while water usage from Sydney residents and companies remains at record highs, as The Guardian reported.

“The idea of using the good times to prepare for the tough times has been lost on consecutive NSW governments and here we are again, surprised by drought, having failed to invest in meaningful water security projects, while old leaking pipes lose 110 million liters a day into the ground,” wrote Justin Field, a member of the Greens party in New South Wales’ parliament, in an opinion piece for the Sydney Morning Herald.

Something has clearly gone wrong with water planning in Sydney. The government has been chasing its tail with this drought. We knew in the middle of last year that inflows into Sydney’s dams were at record lows, just 40 per cent of the previous record low set in the 1940s. But doing anything before an anticipated close election was off the table.

Pushing the pain away has finally caught up to Sydney. Australia’s largest city will implement Level 2 water restrictions in December, which will limit the amount of water people can use on a daily basis. That New South Wales government had to accelerate the timetable for Level 2 water restrictions because of the rapid decline in water levels, according to the Sydney Morning Herald.

With the drought only getting worse, Level 2 restrictions will be in place from 10 December.
Fines will apply, so find out how restrictions apply to you https://t.co/Q8r7vYurfb pic.twitter.com/VX3Wfqmfnb

The regional government has also called for ramping up efforts of recycling sewage water to use in parks, public spaces, backyards and gardens. For years, experts urged Sydney and New South Wales to invest in water recycling, but it had failed to do so preemptively, according to The Guardian.

“During the millennium drought, experts urged the government to invest in large-scale water recycling and stormwater harvesting for Sydney yet they failed to act. Now we’re seeing the consequences,” said Faehrmann, as the Sydney Morning Herald reported. The “millennium drought,” which ended in 2007, saw water levels drop to 33.8 percent in February of that year.

Faehrmann added that the NSW premier needed to explain why she did not introduce water conservation measures in May when she received the Drought Supply Options Study.

“She knew all of this while Sydney had no enforced water restrictions whatsoever,” said Faehrmann, as The Guardian reported.