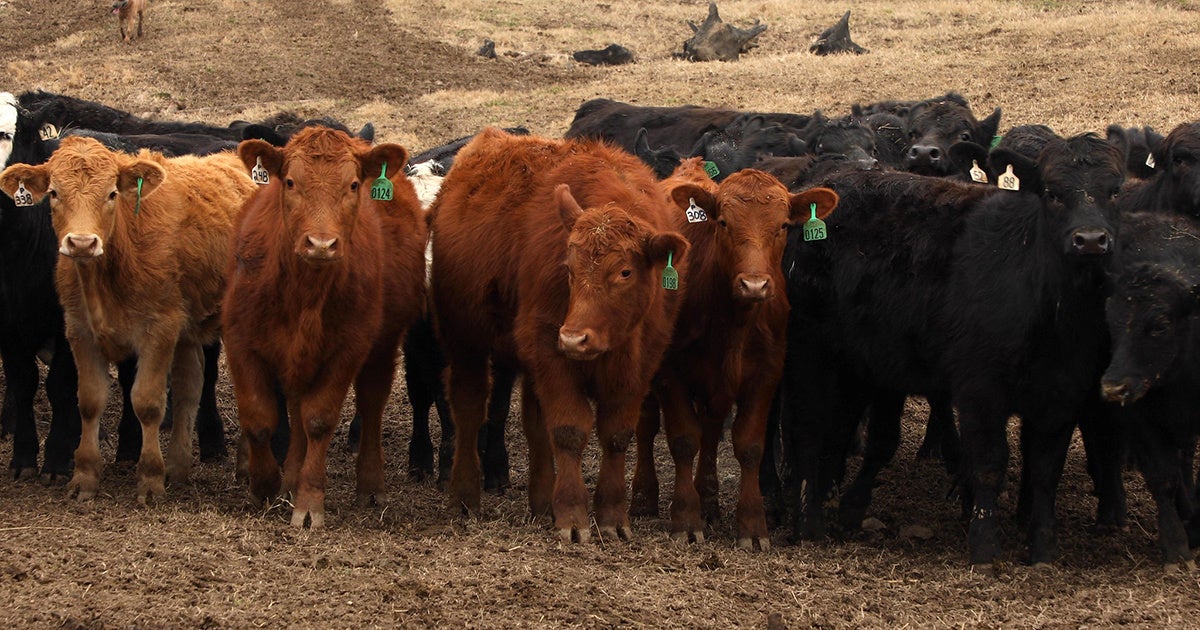 By Aleksandra Arcipowska, Emily Mangan, You Lyu and Richard Waite

Agriculture provides a livelihood for billions of people every day and feeds all of us. Yet food production has significant impacts on the environment through deforestation and water pollution. It’s also a major contributor of greenhouse gas emissions.

As countries work to cut their emissions overall, agricultural emissions need to fall, too. To better understand agriculture’s relationship with global emissions, we took a closer look at the data, using Climate Watch to answer five important questions.

The majority of agricultural production emissions come from raising livestock. More than 70 billion animals are raised annually for human consumption. The biggest single source is methane from cow burps and manure. Enteric fermentation—a natural digestive process that occurs in ruminant animals such as cattle, sheep and goats—accounts for about 40% of agricultural production emissions in the past 20 years. 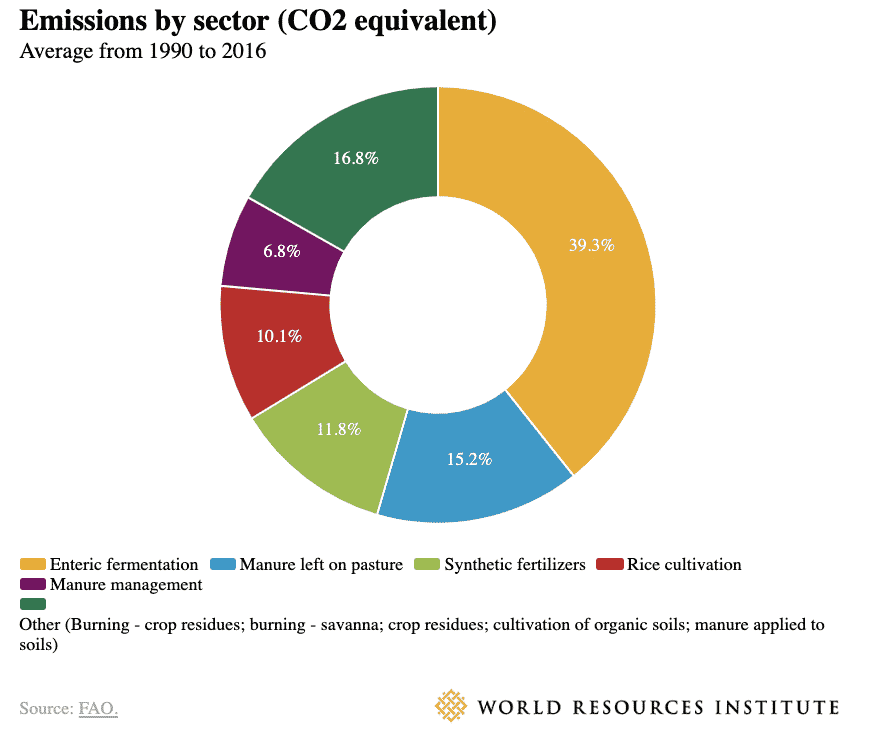 Emissions from agricultural production currently account for 11% of global greenhouse gas emissions and have risen 14% since 2000.

In 24 countries around the world, agriculture is the top source of emissions. 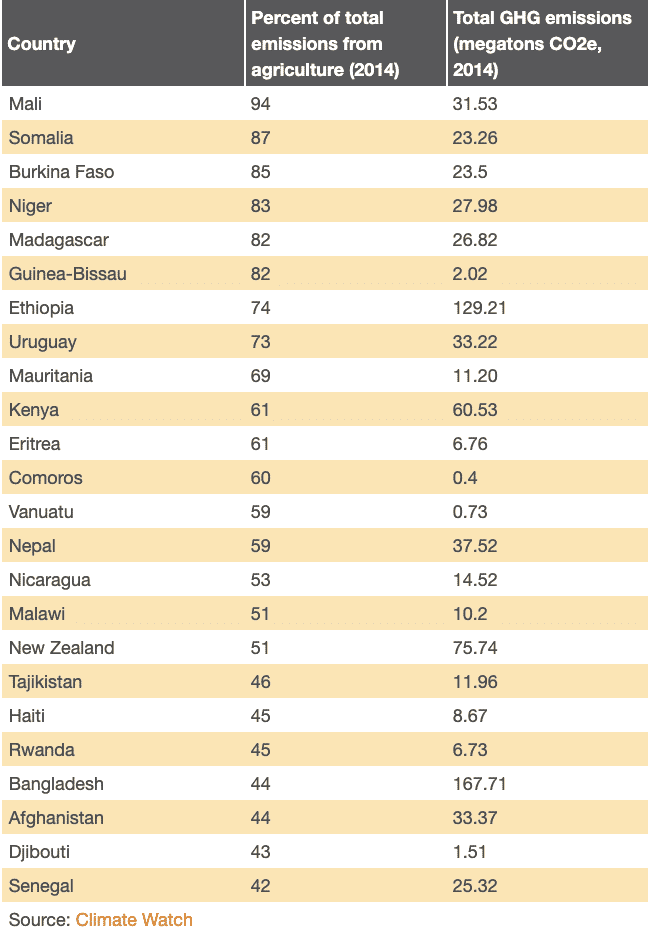 3. Which countries are responsible for the most agricultural production emissions?

Since 2000, China and India’s agricultural production emissions have increased by 16% and 14%, respectively (see: figure 3). In terms of per capita agricultural emissions, the top three countries are Australia, Argentina and Brazil.

4. What will agricultural emissions look like in the future?

Agriculture will likely continue to be a major contributor to global greenhouse gas emissions in both developed and developing countries.

With little to no climate action in the agriculture sector, greenhouse gas emissions from agricultural production could increase 58% by 2050. WRI research also showed that when factoring in land-use change, agricultural emissions under a business-as-usual scenario could eat up 70% or more of the world’s “carbon budget,” the amount of emissions the world can release by 2050 while still limiting global temperature rise to 2 degrees C. Under a more ambitious mitigation scenario called RCP2.6, emissions from the agricultural sector will still increase, but only by 6% (compared to 2000).

WRI also analyzed an even more ambitious “breakthrough technologies” scenario—with changes in technology, policies and practices from farm to plate—that would reduce agricultural production emissions by 40% between 2010 and 2050 and increase carbon removal from the atmosphere with vast amounts of reforestation. Such measures would require enormous amounts of investment and effort, but they are necessary for keeping warming to 1.5 degrees C, the limit scientists say is necessary for preventing some of the worst impacts of climate change.

5. What are countries doing to reduce agricultural emissions?

Emissions from agricultural production can be addressed by improving production and consumption patterns. WRI’s recent research points to a five-course “menu of solutions” to feed 10 billion people by 2050 while reducing agricultural emissions in line with the goals of the Paris Agreement on climate change.

On the production side, boosting yields of crops and livestock through sustainable intensification can reduce emissions per unit of food produced and greatly relieve pressure on the world’s remaining forests. A suite of technological innovations, including feed additives that reduce enteric fermentation, “nitrification inhibitors” that reduce nitrous oxide emissions from fertilizer, and lower-emissions rice varieties could all reduce emissions while maintaining yields.

Consumption can be more efficient by reducing food loss and waste and by shifting diets in wealthier countries away from emissions-intensive products like beef and toward plant-based foods.

This movement has already begun, but it needs to accelerate. Climate Watch allows users to explore all countries’ climate commitments, or NDCs, and see which include action in agriculture. Out of 197 Parties to the Paris Agreement, 75 have committed to mitigation actions and 116 have committed to adaptation actions within the agricultural sector. Top emitting countries like China and India have submitted sector-specific adaptation plans that cover areas including food security, irrigation, land and soil management, and agroforestry. Other countries aim to reduce short-lived climate pollutants like methane through their NDCs. Japan, for example, has proposed measures to reduce methane emissions from agricultural soils and rice paddies.

With new agriculture data on Climate Watch, users can explore for themselves the drivers of agricultural emissions and see what countries have committed to do under the Paris Agreement. Visit the tool here.