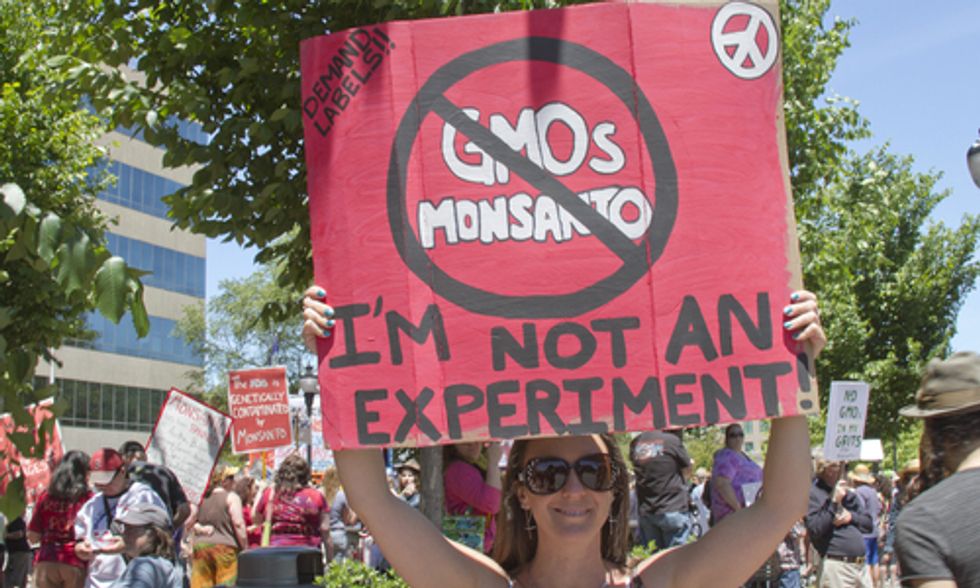 Defying repeated threats of a lawsuit from Monsanto and the Grocery Manufacturers Association (GMA), on May 8, Peter Shumlin, Governor of Vermont, signed a historic bill requiring food manufacturers to label genetically engineered (GE) foods, and to drop the practice of labeling GE foods as “natural” or “all natural.”

On May 9, true to its word, the GMA confirmed that it will sue Vermont in federal court to overturn H. 112.

Vermont isn’t the only state up against the multi-billion dollar lobbying group. The GMA, whose 300-plus members include Monsanto and Dow, Coca-Cola and General Mills, is pushing a bill in Congress that would preempt all states from passing (genetically modified organism) GMO labeling laws.

It’s time for consumers in every state to band together to defeat the GMA’s full-on assault, not only on Vermont, not only on consumers’ right to know what’s in our food, but on states’ rights and on our basic freedoms to protect our health and our communities.

Here’s how we do it. We boycott every product, including the natural and organic brands, owned by members of the GMA. We flood their Facebook pages, tarnish their brand names. We pressure financial institutions, pension funds and mutual funds to divest from Monsanto and the other GMA companies.

Our motto for Monsanto and GMA products must become: Don’t buy them. Don’t sell them. Don’t grow them. And don’t let your financial institution, university, church, labor union or pension fund invest in them.

As soon as the GMA files a lawsuit against Vermont, the Organic Consumers Association, joined by a growing coalition of public interest groups, will launch a boycott and divestment campaign directed against all of the 300 GMA companies and their thousands of brand name products—including foods, beverages, seeds, home and garden supplies, pet food, herbicides and pesticides.

A new balance of power

Monsanto and the GMA have, until now, successfully blocked popular GMO labeling legislation in more than 30 states. They’ve defeated, by a razor-thin margin, two high-profile ballot initiatives, in California (2012) and Washington (2013). And they’ve intimidated Connecticut and Maine into including trigger clauses in those states’ GMO labeling laws, successfully delaying their implementation.

Funding for this anti-consumer, anti-right-to-know lobbying and advertising effort topped $100 million in 2012-2014, including $12 million in illegally laundered donations to I-522, the Washington State GMO labeling ballot initiative of 2013. All of that money has come from the 300 chemical, seed, supermarket, grain, pharmaceutical and food corporations, including Monsanto and the other Gene Giants, who make up the GMA.

Until now the GMA colossus has ruled, not only in Washington D.C., but in all 50 states. But now that Vermont has passed a trigger-free GMO labeling law, and Oregon is poised to do the same in November, the balance of power has shifted.

Monsanto, the GMA and their allies are in panic mode. Because they know that when companies are forced to label or remove GMOs, and also are forced to drop the fraudulent practice of labeling GE-tainted foods as “natural” or “all natural,” in one state, they will have to do it in every state. Just as they’ve been forced to do in Europe, where mandatory GMO labeling has been in effect since 1997.

GMA members and corporate agribusiness hate labeling, because it forces them to reveal all of the hazardous GMOs, chemicals and drug residues lurking in the billions of dollars of foods, beverages, seeds, grains and pesticides they sell. It’s no wonder that Monsanto and GMA’s bill in Congress—a bill they’ve named the “Safe and Accurate Food Labeling Act of 2014”—has been renamed the “DARK” (Denying Americans the right to know) Act.

We absolutely must defeat the impending GMA lawsuit against Vermont. This will require us to raise money and provide legal help to the state.

Equally important, we need to intensify our mass education, grassroots lobbying and marketplace pressure so we can defeat Monsanto and the GMA Big Food/Chemical lobby in the court of public opinion, too. If you would like to donate to this effort click here.

But there are other ways we can use our dollars to defeat the GMA. We can refuse to invest, even indirectly through retirement and mutual funds, in those companies. We can pressure institutional investors like Fidelity, Vanguard and State Street to dump their stock in these companies.

And we can boycott all of the 300 GMA companies and their more than 6,000 brand name products—including foods, beverages, seeds, home and garden supplies, pet food, herbicides and pesticides.

Where to start? As part of this Great Boycott, pro-organic consumer groups will put a special emphasis on boycotting the “Traitor Brands,” those organic and so-called “natural” brands owned and marketed by GMA members.

Health-conscious and green-minded consumers often inadvertently support the GMA when they buy brands like Honest Tea, Kashi, Odwalla and others whose parent companies, all members of the GMA, have donated millions to defeat GMO labeling initiatives in California (Prop 37) and Washington State (I-522). (Take the boycott pledge here.)

These Traitor Brands include, among others:

Why not just boycott the conventional GMA parent company brands?

Because those of us who support organics rarely buy products like Coca-Cola, Diet Pepsi or Kellogg’s Genetically-Modified-Sugar-Coated Frosted Flakes, or a packet of Monsanto seeds or a spray bottle of Roundup or 2, 4-D. The only way to pressure Big Food and the Gene Giants is to get millions of conscious consumers to boycott the brands we actually buy.

Let’s be clear. Junk food and beverage companies who are members of the GMA are gobbling up organic and “natural” brands because they recognize the huge profit potential in the fast-growing organic and natural markets. They want our business. If we stop buying their brands, they know there’s a good chance we’ll find alternative brands. And we might never look back.

Seven ways to fight back

There are about 50 popular organic and natural “Traitor Brands” (owned by GMA members). It’s easy for most of us to boycott those brands. But how do we boycott the entire 6,000-product inventory of GMA member-owned brands, especially those of us who don’t shop for those brands in supermarkets?

Here are seven ways to fight back against Monsanto and all the Corporate Bullies of the Grocery Manufacturers Association.

Even if they are certified organic, don’t buy any Traitor Brand processed foods or beverages. Ninety percent of the foods Americans buy or consume are heavily processed, deliberately laced with sugar, salt and unhealthy fats, contaminated with dyes, preservatives, pesticides, GMOs and drug residues. If you want to be healthy, if you want to avoid cancer, heart attacks or obesity, build your diet around whole foods, especially raw fruits and vegetables, healthy fats (coconut oil, avocadoes, pastured meat, dairy and eggs, nuts and whole grains) and nuts.

Many restaurants, especially chain restaurants (Chipotlé is a rare exception), sell many of the brands owned by GMA members.

5. Boycott all lawn and garden inputs (chemicals, fertilizers, etc.) unless they are “OMRI Approved,” which means they are allowed in organic production.

6. Read the labels on everything you buy. If a GMA member company owns the product, don’t buy it.

7. Download the Buycott app for your smartphone and join OCA's new campaign, "Buy Organic Brands that Support Your Right to Know" so you can scan products before you buy them.

In this age of the Internet and social media, consumer boycotts, divestment campaigns and other forms of marketplace pressure are more powerful than ever. Please join and support the Organic Consumers Association’s “Great Boycott” of Monsanto and the Grocery Manufacturer’s Association today. Let’s show Monsanto and the GMA we mean business.

Millions to ‘March Against Monsanto’ on May 24