7 Types of Plastic Wreaking Havoc on Our Health 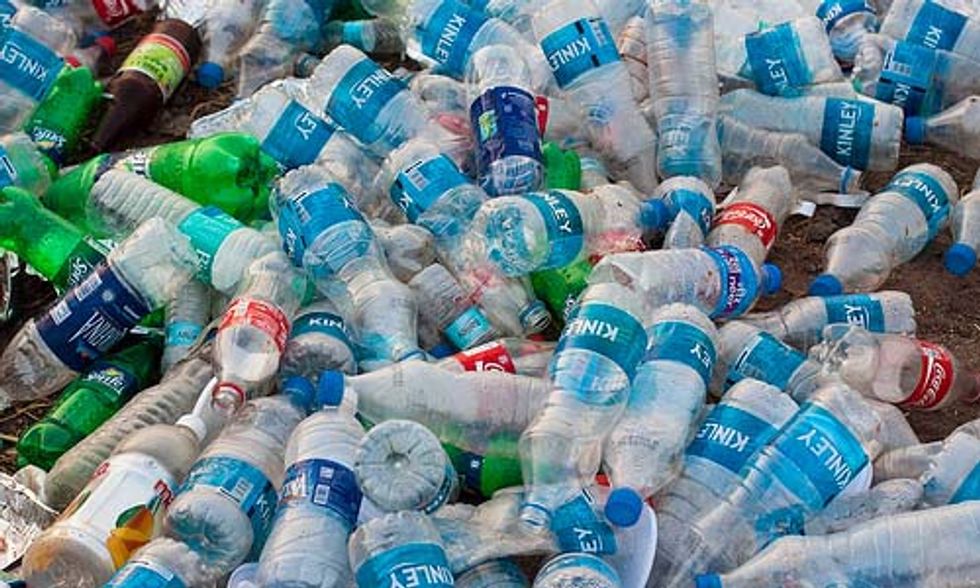 It's all around us—in our houses, walls, plumbing pipes, bottles and cans, rugs, dental fillings, eyeglass lenses, phones, cars, garden mulch and much more. We are talking, of course, about plastic.

Aside from the devastating impact on the planet's health, plastic's impact on human health has been insidious. Decade after decade we have watched as prostate and breast cancer rates have risen, fertility rates in men have dropped, young girls have entered early puberty, young boys have become increasingly hyperactive and children have become fatter. All of these conditions result from multiple factors, but the effects of plastic cannot be discounted.

Endocrine disruptors are the link between human health hazards and plastic. Some of the better publicized endocrine disruptors include dioxins and PCBs, which have polluted our nation's waterways. In the human body, endocrine disruptors mimic the actions of the hormone estrogen. They upset the hormonal balance and can stimulate the growth of tumors in the breast, uterus or prostate. They can affect fertility, pregnancy, and worse, can affect the fetus by interfering with testosterone, disrupting normal sexual development. This disruption is not often apparent until adulthood and includes the increased risk of cancer.

One of the main chemicals used to produce plastics is bisphenol A, or BPA, an endocrine disruptor that is prevalent in a vast number of widely used products, not least of which are plastic food and beverage bottles and the lining of metal cans. Heat, repeated washing, acidity, and alkalinity cause the BPA in plastics to leach into our food and beverages. Further, BPA leaches into our groundwater from all the plastic sitting in landfills. And of course we ingest BPA from all the fish we eat that has previously ingested all that plastic floating around in the ocean.

In one study, the Centers for Disease Control found 95 percent of urine samplescontained some amount of BPA. It's in our blood, our amniotic fluid, our breast milk. Small children are most at risk because they put everything in their mouths, they breathe and drink more, relative to their size, and they excrete waste more slowly.

The health risks of BPA have been observed primarily through animal testing, and there is some controversy as to whether human risk can be extrapolated from animal testing. However, many of the adverse effects of BPA, such as reproductive cancers, obesity, type-2 diabetes and even autism, have been observed to be increasing in the human population in the past 50 years, mirroring the rise of plastic consumption. While correlation is not causation, the signs are certainly not encouraging.

Although the U.S. Food and Drug Administration has maintained that the levels of BPA are safe, Sarah Janssen of the Natural Resources Defense Council told Mother Earth News, “BPA should be considered a hazard to human development and reproduction with clear evidence of adverse effects." Many countries, including the U.S., have banned the presence of BPA in baby bottles. Unfortunately, the common substitute is often Biphenol S (BPS), which is also an endocrine disruptor and seems to cause many of the same problems as BPA.

Polycarbonate water bottles, popular among those who seek to minimize plastic pollution, are a major source of human BPA exposure. Studies have shown that BPA leaches into water even at room temperature, and when exposed to boiling water, BPA leached 55 times more rapidly than it did prior to exposure to the heat.

Another class of endocrine disruptor called phthalates is also present in plastic products containing PVC. Phthalates are used to soften plastic and can be found in toys, deodorants and shampoos, shower curtains, raincoats, food packaging and a myriad of other products. Phthalates are loosely bound to plastic and easily absorbed into food, beverages and saliva, and like BPA, have been commonly detected in our bodies. Most concerning is the effect phthalates have on reproductive health in males. Exposure in fetuses has been linked to the malformation of the male reproductive system.

The dangers from plastic are not just from ingestion. During the industrial manufacturing of plastic, all manner of toxic chemicals are released, many of which are carcinogenic or neurotoxic. These would include vinyl chloride, from PVC; dioxins and benzene, from polystyrene; and formaldehyde, from polycarbonates. Many of these toxins are known as POPs, or persistent organic pollutants. They are highly toxic, and like plastic, they don't easily go away.

Plastic comes in many variations, different combinations of resins and polymers creating plastics with different properties, and different types of plastic present different dangers. The numbers embedded on most plastic products identify the type of plastic it is made from, ostensibly so it can be properly recycled. (The reality is that barely 10 percent of plastic is recycled, or more accurately down-cycled, say from a soda bottle to winter coat insulation, so it still ends up in a landfill.)

Here are the most common plastics, by number, and some of the hazards they present.

PET is commonly used in commercially sold water bottles, soft drink bottles, sports drink bottles and condiment bottles (like ketchup). While it is generally considered a “safe" plastic, and does not contain BPA, in the presence of heat it can leach antimony, a toxic metalloid, into food and beverages, which can cause vomiting, diarrhea and stomach ulcers. Some studies have shown up to 100 times the amount of antimony in bottled water than in clean groundwater. The longer the bottle is on the shelf or exposed to heat or sunshine, the more antimony is likely to have leached into the product.

HDPE is commonly used in milk and juice bottles, detergent bottles, shampoo bottles, grocery bags, and cereal box liners. Like PET, it is also considered “safe," but has been shown to leach estrogenic chemicals dangerous to fetuses and juveniles.

PVC can be flexible or rigid, and is used for plumbing pipes, clear food packaging, shrink wrap, plastic children's toys, tablecloths, vinyl flooring, children's play mats, and blister packs (such as for medicines). PVC contains a phthalate called DEHP, which can cause male traits to become more feminized (DEHP-containing products have been banned in many countries, but not the U.S.). In some products, DEHP has been replaced with another chemical called DiNP, which has similarly been shown to have hormone disruption properties.

LDPE is used for dry cleaning bags, bread bags, newspaper bags, produce bags, and garbage bags, as well as “paper" milk cartons and hot/cold beverage cups. LDPE does not contain BPA, but as with most plastics, it can leach estrogenic chemicals.

PP is used to make yogurt containers, deli food containers and winter clothing insulation. PP actually has a high heat tolerance and as such, does not seem to leach many of the chemicals other plastics do.

PS, also popularly known as Styrofoam, is used for cups, plates, take-out containers, supermarket meat trays, and packing peanuts. Polystyrene can leach styrene, a suspected carcinogen, especially in the presence of heat (which makes hot coffee in a Styrofoam container an unwise choice).

Any plastic item not made from the above six plastics is lumped together as a #7 plastic. Any plastic designated #7 is likely to leach BPA and/or BPS, both potent endocrine disruptors linked to interfering with proper mood, growth, development, sexual function, reproductive function, and puberty, among other essential human developmental processes. They are also suspected of increasing the risk of adult reproductive cancers, obesity, heart disease, and type 2 diabetes.

The Dangers of Outgassing

The danger from chemicals in plastic is not limited to leaching from bottles and food wraps. Another significant source of concern is from outgassing (also known as offgassing). That new-car smell, or the odor from a new synthetic-fiber carpet or new plastic toy is actually called outgassing.

What is chemically happening is that volatile organic compounds (VOCs) are evaporating into the air around us. These gases are, in many cases, hazardous to human health.

These VOCs include aldehydes, alcohols, plasticizers, and alkanes. PVC is probably the worst outgassing offender and is prevalent throughout the household. A buildup of VOCs in the household (sometimes called sick building syndrome) can result in symptoms such as dizziness, nausea, allergies, skin/eye/nose/throat irritations, and asthma. Long-term damage can include cancer and heart disease. Heat can speed up the process of outgassing, so it may be helpful to put new products containing plastic out in the sun for a few hours to minimize the indoor VOC buildup.

The ABCs of Avoiding Plastics

The obvious solution to avoiding plastic toxicity is to avoid plastics, which, in a world awash in plastic, is pretty difficult. In the absence of this, it makes sense to limit your close encounters with plastic as best as you can.

Larry Schwartz is a Brooklyn-based freelance writer with a focus on health, science and American history.