50 Reasons We Should Fear the Worst from Fukushima 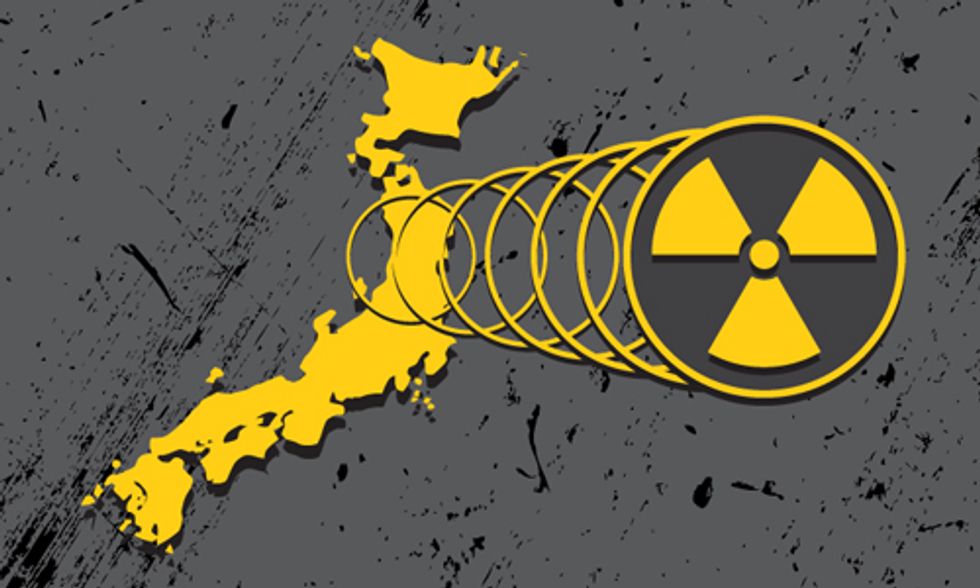 [This is the first in a two part series]

Japan's harsh dictatorial censorship has been matched by a global corporate media blackout aimed—successfully—at keeping Fukushima out of the public eye.

But that doesn't keep the actual radiation out of our ecosystem, our markets ... or our bodies.

Speculation on the ultimate impact ranges from the utterly harmless to the intensely apocalyptic .

But the basic reality is simple: for seven decades, government Bomb factories and privately-owned reactors have spewed massive quantities of unmonitored radiation into the biosphere.

The impacts of these emissions on human and ecological health are unknown primarily because the nuclear industry has resolutely refused to study them.

Indeed, the official presumption has always been that showing proof of damage from nuclear Bomb tests and commercial reactors falls to the victims, not the perpetrators.

And that in any case, the industry will be held virtually harmless.

This “see no evil, pay no damages" mindset dates from the Bombing of Hiroshima to Fukushima to the disaster coming next ... which could be happening as you read this.

Here are 50 preliminary reasons why this radioactive legacy demands we prepare for the worst for our oceans, our planet, our economy ... ourselves.

1. At Hiroshima and Nagasaki (1945), the U.S. military initially denied that there was any radioactive fallout, or that it could do any damage. Despite an absence of meaningful data, the victims (including a group of U.S. prisoners of war) and their supporters were officially “discredited" and scorned.

2. Likewise, when Nobel-winners Linus Pauling and Andre Sakharov correctly warned of a massive global death toll from atmospheric Bomb testing, they were dismissed with official contempt ... until they won in the court of public opinion.

3. During and after the Bomb Tests (1946-63), downwinders in the South Pacific and American west, along with thousands of U.S. “atomic vets," were told their radiation-induced health problems were imaginary ... until they proved utterly irrefutable.

4. When British Dr. Alice Stewart proved (1956) that even tiny x-ray doses to pregnant mothers could double childhood leukemia rates, she was assaulted with 30 years of heavily funded abuse from the nuclear and medical establishments.

5. But Stewart's findings proved tragically accurate, and helped set in stone the medical health physics consensus that there is no “safe dose" of radiation ... and that pregnant women should not be x-rayed, or exposed to equivalent radiation.

6. More than 400 commercial power reactors have been injected into our ecosphere with no meaningful data to measure their potential health and environmental impacts, and no systematic global data base has been established or maintained.

7. “Acceptable dose" standards for commercial reactors were conjured from faulty A-Bomb studies begun five years after Hiroshima, and at Fukushima and elsewhere have been continually made more lax to save the industry money.

8. Bomb/reactor fallout delivers alpha and beta particle emitters that enter the body and do long-term damage, but which industry backers often wrongly equate with less lethal external gamma/x-ray doses from flying in airplanes or living in Denver.

11. When Dr. Ernest Sternglass, who had worked with Albert Einstein, warned that reactor emissions were harming people, thousands of copies of his Low-Level Radiation (1971) mysteriously disappeared from their primary warehouse.

12. When the Atomic Energy Commission's (AEC) Chief Medical Officer, Dr. John Gofman, urged that reactor dose levels be lowered by 90 percent, he was forced out of the AEC and publicly attacked, despite his status a founder of the industry.

13. A member of the Manhattan Project, and a medical doctor responsible for pioneer research into LDL cholesterol, Gofman later called the reactor industry an instrument of “premeditated mass murder."

14. Stack monitors and other monitoring devices failed at Three Mile Island (1979) making it impossible to know how much radiation escaped, where it went or who it impacted and how.

15. But some 2,400 TMI downwind victims and their families were denied a class action jury trial by a federal judge who said “not enough radiation" was released to harm them, though she could not say how much that was or where it went.

16. During TMI's meltdown, industry advertising equated the fallout with a single chest x-ray to everyone downwind, ignoring the fact that such doses could double leukemia rates among children born to involuntarily irradiated mothers.

17. Widespread death and damage downwind from TMI have been confirmed by Dr. Stephen Wing, Jane Lee and Mary Osbourne, Sister Rosalie Bertell, Dr. Sternglass, Jay Gould, Joe Mangano and others, along with hundreds of anecdotal reports.

18. Radioactive harm to farm and wild animals downwind from TMI has been confirmed by the Baltimore News-American and Pennsylvania Department of Agriculture.

19. TMI's owner quietly paid out at least $15 million in damages in exchange for gag orders from the affected families, including at least one case involving a child born with Down's Syndrome.

20. Chernobyl's explosion became public knowledge only when massive emissions came down on a Swedish reactor hundreds of miles away, meaning that—as at TMI and Fukushima—no one knows precisely how much escaped or where it went.

23. Three Russian scientists who compiled more than 5,000 studies concluded in 2005 that Chernobyl had already killed nearly a million people worldwide.

24. Children born in downwind Ukraine and Belarus still suffer a massive toll of mutation and illness, as confirmed by a wide range of governmental, scientific and humanitarian organizations.

26. After 28 years, the reactor industry has still not succeeded in installing a final sarcophagus over the exploded Chernobyl Unit 4, though billions of dollars have been invested.

27. When Fukushima Units 1-4 began to explode, President Obama assured us all the fallout would not come here, and would harm no one, despite having no evidence for either assertion.

28. Since President Obama did that, the U.S. has established no integrated system to monitor Fukushima's fallout, nor an epidemiological data base to track its health impacts ... but it did stop checking radiation levels in Pacific seafood.

29. Early reports of thyroid abnormalities among children downwind from Fukushima, and in North America are denied by industry backers who again say “not enough radiation" was emitted though they don't know how much that might be.

30. Devastating health impacts reported by sailors stationed aboard the USS Ronald Reagan near Fukushima are being denied by the industry and Navy, who say radiation doses were too small to do harm, but have no idea what they were.

31. While in a snowstorm offshore as Fukushima melted, sailors reported a warm cloud passing over the Reagan that brought a “metallic taste" like that described by TMI downwinders and the airmen who dropped the Bomb on Hiroshima.

32. Though it denies the sailors on the Reagan were exposed to enough Fukushima radiation to harm them, Japan (like South Korea and Guam) denied the ship port access because it was too radioactive (it's now docked in San Diego).

33. The Reagan sailors are barred from suing the Navy, but have filed a class action against Tokyo Electric Power (Tepco), which has joined the owners at TMI, the Bomb factories, uranium mines, etc., in denying all responsibility.

35. The report questioned the clean-up because “a true decontamination operations standard for 'clearance' was not set," thereby risking “the potential spread of radiological contamination to military personnel and the local populace."

36. Nonetheless, it reported that during the clean-up, “the use of duct tape and baby wipes was effective in the removal of radioactive particles."

37. In league with organized crime, Tepco is pursuing its own clean-up activities by recruiting impoverished homeless and elderly citizens for “hot" on-site labor, with the quality of their work and the nature of their exposures now a state secret.

38. At least 300 tons of radioactive water continue to pour into the ocean at Fukushima every day, according to official estimates made prior to such data having been made a state secret.

39. To the extent they can be known, the quantities and make-up of radiation pouring out of Fukushima are also now a state secret, with independent measurement or public speculation punishable by up to ten years in prison.

40. Likewise, “There is no systematic testing in the U.S. of air, food and water for radiation," according to University of California (Berkeley) nuclear engineering Professor Eric Norman.

41. Many radioactive isotopes tend to concentrate as they pour into the air and water, so deadly clumps of Fukushima's radiation may migrate throughout the oceans for centuries to come before diffusing, which even then may not render it harmless.

42. Radiation's real world impact becomes even harder to measure in an increasingly polluted biosphere, where interaction with existing toxins creates a synergy likely to exponentially accelerate the damage being done to all living things.

43. Reported devastation among starfish, sardines, salmon, sea lions, orcas and other ocean animals cannot be definitively denied without a credible data base of previous experimentation and monitoring, which does not exist and is not being established.

44. The fact that “tiny" doses of x-ray can harm human embryos portends that any unnatural introduction of lethal radioactive isotopes into the biosphere, however “diffuse," can affect our intertwined global ecology in ways we don't now understand.

45. The impact of allegedly “minuscule" doses spreading from Fukushima will, over time, affect the minuscule eggs of creatures ranging from sardines to starfish to sea lions, with their lethal impact enhanced by the other pollutants already in the sea.

46. Dose comparisons to bananas and other natural sources are absurd and misleading as the myriad isotopes from reactor fallout will impose very different biological impacts for centuries to come in a wide range of ecological settings.

47. No current dismissal of general human and ecological impacts—"apocalyptic" or otherwise—can account over time for the very long half-lives of radioactive isotopes Fukushima is now pouring into the biosphere.

48. As Fukushima's impacts spread through the centuries, the one certainty is that no matter what evidence materializes, the nuclear industry will never admit to doing any damage, and will never be forced to pay for it (see upcoming sequel).

49. Hyman Rickover, father of the nuclear navy, warned that it is a form of suicide to raise radiation levels within Earth's vital envelope, and that if he could, he would “sink" all the reactors he helped develop.

50. “Now when we go back to using nuclear power," he said in 1982, “I think the human race is going to wreck itself, and it is important that we get control of this horrible force and try to eliminate it."

As Fukushima deteriorates behind an iron curtain of secrecy and deceit, we desperately need to know what it's doing to us and our planet.

It's tempting to say the truth lies somewhere between the industry's lies and the rising fear of a tangible apocalypse.

In fact, the answers lie beyond.

Defined by seven decades of deceit, denial and a see-no-evil dearth of meaningful scientific study, the glib corporate assurances that this latest reactor disaster won't hurt us fade to absurdity.

Fukushima pours massive, unmeasured quantities of lethal radiation into our fragile ecosphere every day, and will do so for decades to come.

Five power reactors have now exploded on this planet and there are more than 400 others still operating.

Pre-wrapped in denial, protected by corporate privilege, they are the ultimate engines of global terror.

Harvey Wasserman edits www.nukefree.org, where petitions calling for the repeal of Japan's State Secrets Act and a global takeover at Fukushima are linked. He is author of SOLARTOPIA! Our Green-Powered Earth.