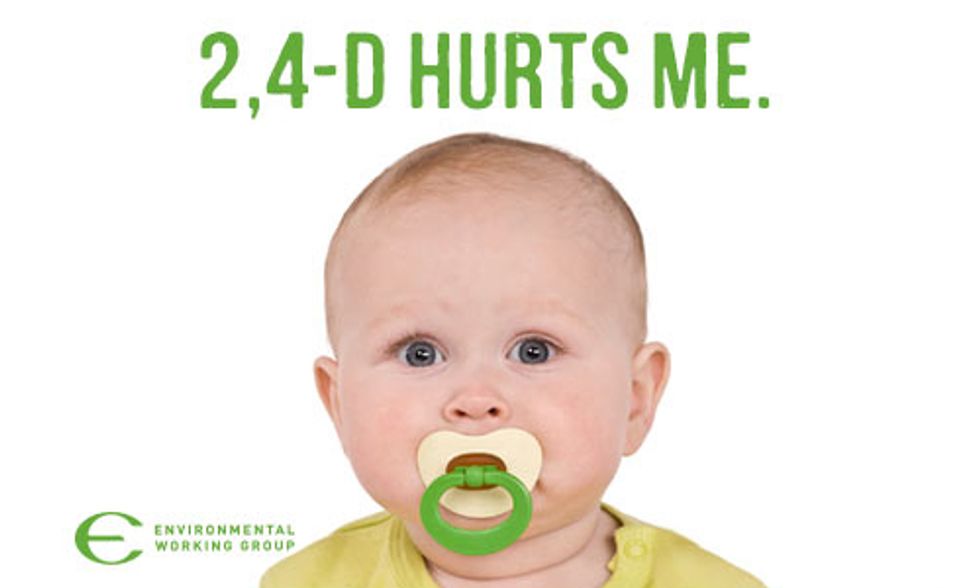 There are 5,609 American schools within 200 feet of farm fields that may soon be blanketed with massive amounts of a toxic defoliant linked to Parkinson’s disease, non-Hodgkin’s lymphoma and reproductive and immune system problems.

That’s the finding of a new Environmental Working Group (EWG) analysis that shows that hundreds of thousands of children across the country will be at risk of increased exposure to the harmful chemical compound 2,4-D if the U.S. Environmental Protection Agency (EPA) approves a new weed killer mixture called “Enlist DuoTM” created by Dow AgroSciences (a wholly owned subsidiary of Dow Chemical Co.).

That apparently doesn’t worry the EPA. But if these rural schools were full of plants rather than children, the agency would be concerned.

When it comes to dousing crops with noxious chemicals, the EPA focused on buffer zones for plants, not people—according to the agency’s recent risk analysis of Enlist Duo, which is a combination of 2,4-D and glyphosate. In its assessment, the EPA called for a 200-foot buffer zone to protect non-weed plants from the product but glosses over the health risks to children. (Read more about EWG’s analysis of how the EPA got it wrong.)

The agency is in the process of deciding whether to approve Enlist Duo for use on genetically engineered (GE) corn and soybeans designed to withstand blasts of 2,4-D and glyphosate. If the EPA gives the weed killer combo a thumbs-up, the amount of 2,4-D sprayed in the U.S. by 2020 would increase three-to-seven fold the amounts used today, according to U.S. Department of Agriculture estimates.

Click on the image to access the map that shows locations of schools that are within 1,000 feet of soy and cornfields.

In its assessment, the EPA doesn’t mention schools. But it does take care to assess the risk to plants other than the weeds Enlist Duo is designed to kill (so-called “non-target plants”) if the mixture were to drift off the fields where it’s sprayed. If you’re a plant, the EPA thinks you might be in danger even at a distance of 1,000 feet. But Dow scientists promised the EPA that Enlist Duo won’t drift that far. The EPA took them at their word and concluded that if you’re a plant, you can be safe as close as 202 feet from a sprayed field—assuming the farmer sprays Dow's proprietary Enlist Duo formulation and not any other 2,4-D formulation (and follows all the instructions on the label.)

Even if 2,4-D doesn’t travel more than 200 feet from a field where it’s used, Enlist Duo would put thousands of rural school children at risk. That’s not a trivial matter. Human exposure to 2,4-D has been linked to a number of health risks, including thyroid, immune system and reproductive problems, non-Hodgkin's lymphoma and Parkinson’s disease.

The EPA’s assessment also doesn’t focus on the possibility of people inhaling 2,4-D, even though that’s one of the primary routes of exposure. Children in schools and daycare facilities closest to fields would be at increased risk whenever spraying takes place—both when school is in session and when children use the playgrounds or ball fields during summer break.

The 10 states with the most schools within 200 feet of cropland growing corn and soybeans are: