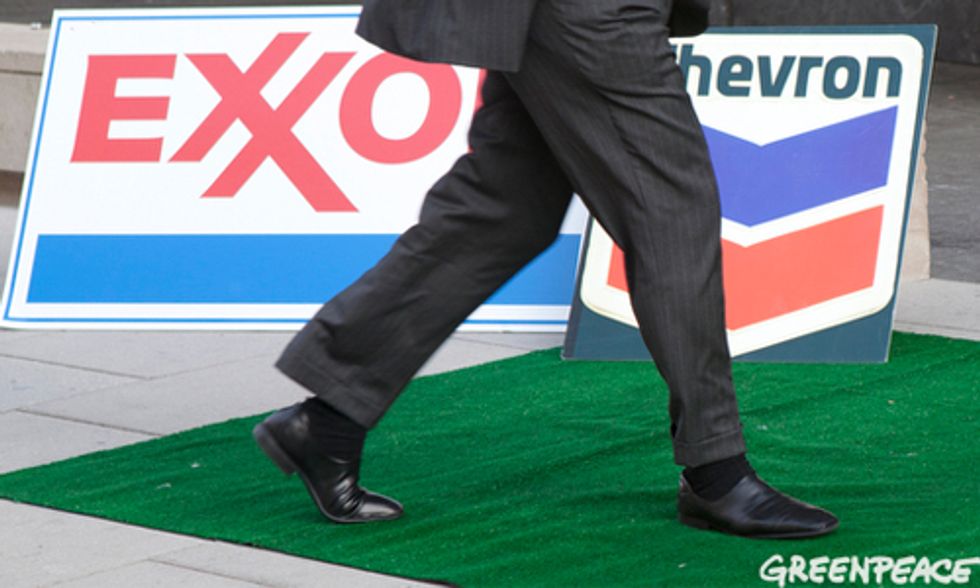 Perhaps you heard the good news—the world's largest public relations firm, Edelman, just spun off an advertising subsidiary so that it could show a commitment to not aiding the denial of climate change science. The Guardian explains how American Petroleum Institute's (API) contracts with Edelman were so massive—tens of millions of dollars—that it was up to 10 percent of the PR giant's income.

For the world's largest firm to take some meaningful steps to throw in the towel on climate denial indicates a precedent for an industry that most activists wouldn't have bothered to spend time trying to change. Photo credit: Greenpeace

For years, Edelman has managed multi-million dollar contracts with the API, using its Blue Advertising subsidiary to help API run commercials selling fantasies to people: that oil and gas are our only viable, plentiful, "AMERICAN" sources of energy.

In the saga that led Edelman to dump the lobbyists at API, Greenpeace had a small role to play: we infiltrated a commercial shoot, run by Edelman's Blue advertising arm for API. The commercials were to be called "Vote 4 Energy," casting the illusion of mass popular demand for more oil and gas drilling (and more pollution, more climate change, and more government giveaways to prop it all up).

After being dressed up in a button-down, plaid orange shirt—I'm not sure what look they had in mind for me—I was put in front of the camera and told to repeat lines back. This despite the casting call for "real people, not actors." Huh.

Instead of telling them "I Vote" for oil and gas, I ran off script and demanded a prioritization of clean energy, not continued pandering to oil lobbyists at API. As I was ushered off set, the person I appealed to for a clean energy future was Robert McKernan, president of Blue Advertising, the company that Edelman is ditching. He was the last person I saw before being booted out of the studio rooms, and as we locked eyes, I appealed directly to him: "we need clean sources of energy, like wind and solar." Here's a transcribed recording of that on-set disruption:

Shockingly, API and Edelman didn't stop the commercial shoot there and reinvent it into an appeal for clean energy (yes, that's sarcasm). And as Edelman and API moved forward with the commercial, Greenpeace got another idea.

We crashed API's launch event for Vote4Energy, rolling out an astroturf mat for politicians and lobbyists to make their entrance, framed by oil company logos. Online, we buried their actual website with our spoof material and drove more traffic to our fake commercial. Some journalists actually linked to our silly video in their stories about API's Vote4Energy campaign.

This was in January, 2012. Since then, big things have happened at Edelman.

Mr. Edelman was personally urging the press that he cared about the issue, and fired a top executive who was uncooperative with the Climate Investigations Center, which was surveying PR firms on their climate change policies. It was awkward.

The mess was intensified by another round of documents showing Edelman was helping TransCanada—the operator of the proposed Keystone XL tar sands pipeline—with campaign planning to subvert local activism in Canada against TransCanada's Energy East pipeline. After the plan was leaked, TransCanada dumped Edelman.

It seems that Big Oil is starting to be a Big Headache for Big PR. Of course, there are still plenty of public relations firms with little to no moral standard out there, unrecognized by the public, for Big Oil to pay for dirty PR.

But for the world's largest firm to take some meaningful steps to throw in the towel on climate denial indicates a precedent for an industry that most activists wouldn't have bothered to spend time trying to change.

And it's a good thing, because climate scientists aren't getting any less distressed about our changed climate. The U.S. National Academy of Sciences is getting desperate enough to officially call for "unproven technology" in attempts to mitigate the crisis. Despite the weight of the crisis, which is just getting started, coal companies, oil companies, the Koch brothers and their legion of front groups are creating layers of red tape to block the U.S. Environmental Protection Agency's Clean Power Plan, the first regulation of carbon emissions from existing power plants.

Perhaps there's a slick PR firm out there willing to make right of its past and do something productive for the climate, and all of us who rely upon it.

Edelman: you're up. Show us you mean it this time.