Why the Senate Must 'Vote No' on Fast-Tracking the TPP 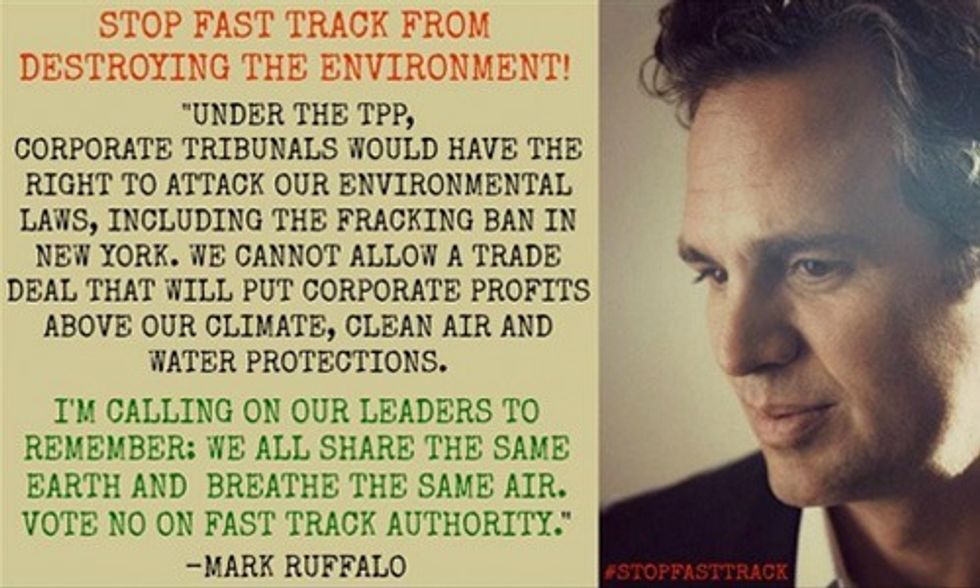 Fast Track would railroad the Trans-Pacific Partnership (TPP) through Congress. Thanks to leaks, we know that the TPP includes provisions that would harm the environment and accelerate climate change. A provision was even added to the Fast Track legislation forbidding climate issues from being included in U.S. trade pacts for the next six years.

After six years, TPP negotiations are almost completed but the text remains secret from the public and press and Congress only has limited access. But 500 official U.S. trade advisors mainly representing corporate interests have had special access to the negotiations and text and now want to use Fast Track to impose through the TPP an anti-environmental agenda that could not withstand open public debate.

Thanks to leaks, we know that the TPP would empower foreign corporations to challenge our sovereign laws that protect the environment and our citizens by dragging the U.S. government to tribunals where corporate lawyers serve as “judges.” These tribunals would be empowered to order the U.S. government to pay corporation that claim our laws violate their new TPP rights unlimited taxpayer compensation for their lost future profits.

In my own state of New York, where hundreds of thousands of people worked together to get a ban on fracking, we could be sued for billions of dollars for protecting our communities. This is not a hypothetical threat: already under a narrower version of these rules, the Lone Pine Corporation sued Canada demanding hundreds of millions in compensation for a moratorium on fracking under the St. Lawrence Seaway.

If the TPP is Fast Tracked into place, overnight 9,000 additional foreign firms would have the rights to attack U.S. environmental policies. The European pact now being negotiated would quadruple our liability to these attacks—almost 40,000 new firms could newly use the tribunals to attack U.S. laws passed by Congress and state legislatures that our domestic courts have said were just fine.

Even more insidious, Representative Paul Ryan, a climate science denier, added language to the Fast Track Authority that would block any action on climate change in trade agreements.

We cannot allow a trade deal that will put corporate profits above our climate, clean air and water protections. I'm calling on our leaders to remember: We all share the same Earth and breath the same air. Vote no on Fast Track Authority.