Why the Keystone XL Tar Sands Pipeline is a Climate Catastrophe 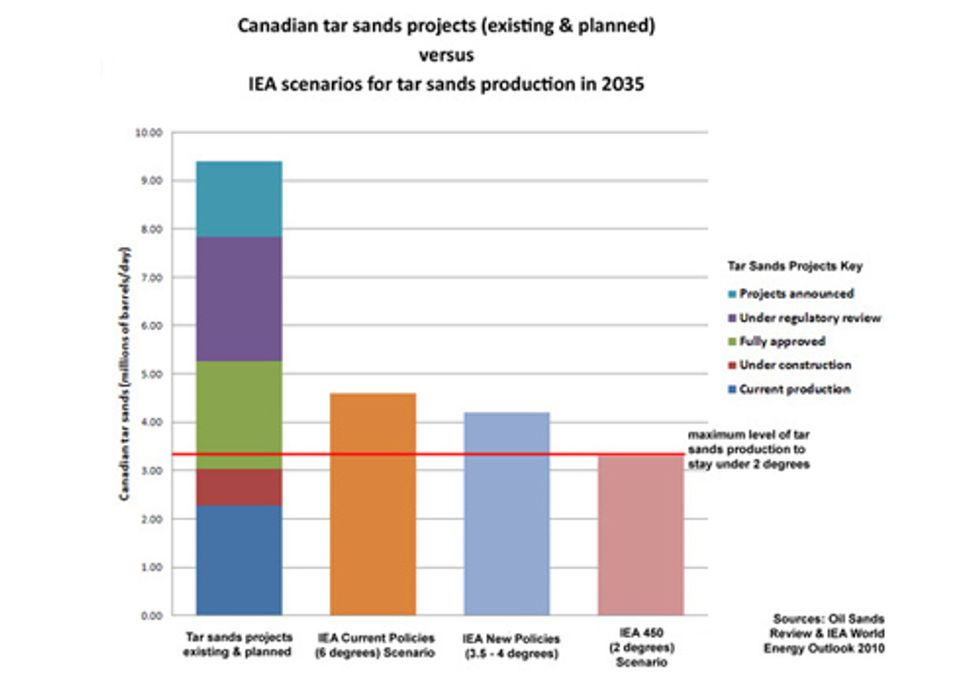 By Danielle Droitsch and Anthony Swift

A backgrounder on the climate impacts from Keystone XL released last week by the Natural Resources Defense Council (NRDC) details how the U.S. decision on whether to approve the Keystone XL pipeline will have a direct bearing on whether the tar sands industry can attain those goals, with their attendant increases in carbon pollution. Keystone XL would lock the U.S. into a long-term commitment to an energy infrastructure that relies on dirty oil.

The tar sands industry has proposed expansion plans that would triple production by 2030 which would lead to an increase in carbon emissions to more than 900 MMT by 2030. This growth requires a massive expansion of capacity to transport tar sands oil. But as NRDC outlines, the tar sands industry’s production targets would necessitate the construction of every new pipeline currently proposed plus millions of barrels worth of additional transport capacity. The Keystone XL pipeline is an absolutely necessary step for tar sands expansion, and given current pipeline capacity constraints is also significant as the first test of whether such expansion can move forward. In other words, Keystone XL would enable a significant amount of tar sands expansion that otherwise would not occur.

Some have argued that the Keystone XL pipeline won’t carry enough oil to have a major impact on climate.

The direct emissions associated with the amount of oil Keystone XL itself would carry are more significant than they may at first appear. The U.S. Environmental Protection Agency (EPA) has estimated that Keystone XL would increase annual carbon emissions by up to 27.6 MMt CO2e annually—the equivalent of seven coal-fired power plants operating continuously or having 6.2 million cars on the road for 50 years.

And new research by Oil Change International shows carbon emissions associated with tar sands are higher than currently estimated. Tar sands refining produces significant volumes of petroleum coke (petcoke), a high-carbon refining byproduct that is increasingly being used as a cheaper, more carbon-intensive substitute to coal. According to Oil Change International, Keystone XL will produce enough petcoke to fuel five U.S. coal plants. These carbon emissions from this petcoke have not been previously factored into a climate analysis of the pipeline and will raise total emissions of the pipeline by 13 percent.

Approval of the Keystone XL pipeline and its operation would have an impact on tar sands production and emissions far beyond the specific amount of oil the pipeline would carry.

The pipeline’s effect on prices and market expectations would prompt a significant expansion of tar sands production.  This can be seen, in part, by the current effect the absence of the pipeline is having. The lack of capacity to move tar sands oil from Alberta to other markets has significantly reduced tar sands prices relative to similar international crudes, at times bringing them to below $50 a barrel. These low prices are diminishing investment in new tar sands expansion projects.

Expanding the exploitation of tar sands would significantly undermine efforts to reduce carbon pollution. The International Energy Agency’s World Energy Outlook includes scenarios with different levels of Canadian tar sands production in 2035. In the scenario that keeps atmospheric carbon at 450 parts per million (which results in a 50 percent chance of keeping the average global temperature below the 2 degree C threshold), tar sands production is 3.3 million barrels a day. The scenario with production at 4.6 million barrels a day—still below industry’s 2030 goal—estimates that global temperature will rise by six degrees Celsius with catastrophic results.

An essential point here is that concerns about tar sands impacts are not premised on tapping total tar sands reserves over centuries. Rather, tar sands production levels in line with industry’s explicit goals could have disastrous consequences.

Others argued that tar sands development is inevitable

Industry insiders and even pro-tar sands government officials in Canada understand that the expansion of tar sands production is not inevitable. They have publicly acknowledged that they need the building of pipelines to access international markets for expansion.

Even if you build every single pipe that's on the table right now ... you're still short pipeline capacity … For the growth to continue, all the proposed export pipeline capacity and more will need to be built, and soon.  Andrew Potter, Managing Director, Institutional Equity Research at CIBC World Markets, Jan. 1, 2013

Current alternatives to the Keystone XL for transporting tar sands oil are on a much smaller scale, in much earlier stages of development, and in many cases face such significant opposition that they are unlikely to move ahead in the next five to 10 years if at all.