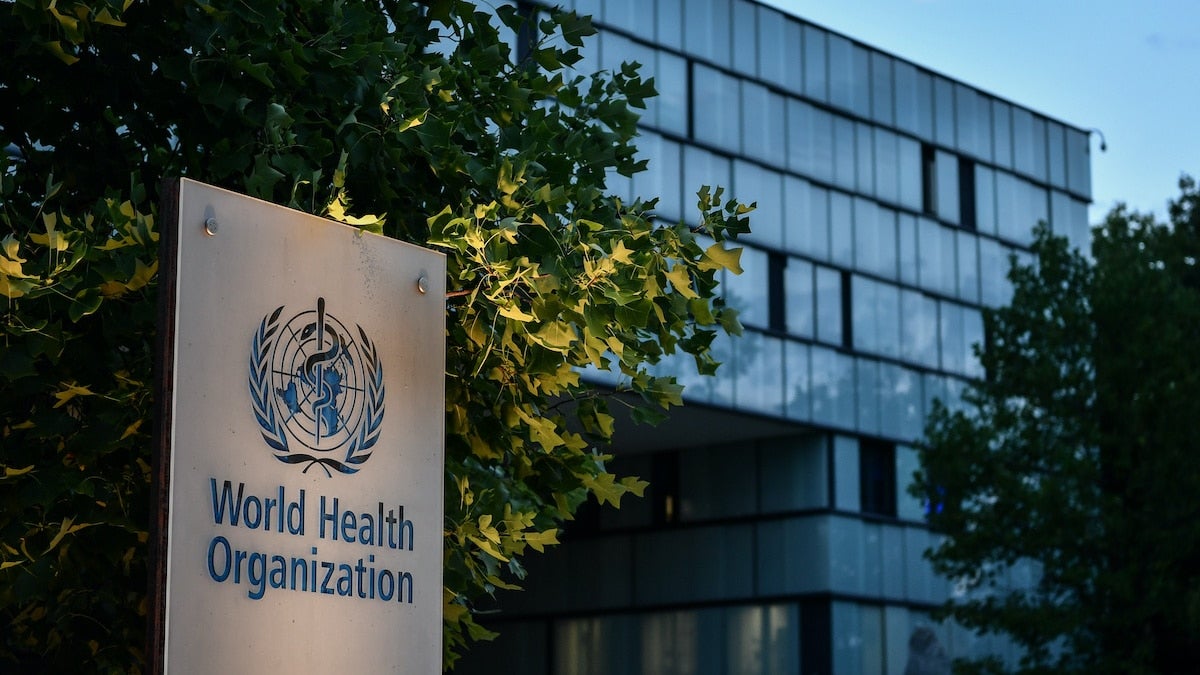 Headquarters of the World Health Organization in Geneva amid the COVID-19 outbreak on Aug. 17, 2020. FABRICE COFFRINI / AFP via Getty Images

The 64 high-income countries bring the total number of participating countries up to 156, but their participation is crucial to financing the 2 billion doses that the WHO hopes to purchase and distribute before the end of 2021, according to STAT News.

The 156 economies participating in Covax make up 64 percent of the global population.

“COVAX is now in business: governments from every continent have chosen to work together, not only to secure vaccines for their own populations, but also to help ensure that vaccines are available to the most vulnerable everywhere,” said Dr. Seth Berkley, CEO of Gavi, in a WHO statement. “With the commitments we’re announcing today for the COVAX Facility, as well as the historic partnership we are forging with industry, we now stand a far better chance of ending the acute phase of this pandemic once safe, effective vaccines become available.”

The United States, Russia and China have not agreed to join Covax. The Trump administration plans to withdraw from the WHO by next July so it refuses to participate in a WHO-led campaign, as STAT News reported. China has not said if it will participate or not, according to The Washington Post.

“COVID-19 is an unprecedented global crisis that demands an unprecedented global response,” said WHO Director-General Dr. Tedros Adhanom Ghebreyesus in a statement. “Vaccine nationalism will only perpetuate the disease and prolong the global recovery. Working together through the COVAX Facility is not charity, it’s in every country’s own best interests to control the pandemic and accelerate the global economic recovery.”

At a briefing on Monday, Ghebreyesus denounced vaccine nationalism again, according to The Washington Post. “The race for vaccines is a collaboration, not a contest,” he said to a gathering of reporters. “This is not charity. It’s in every country’s best interest. We sink or swim together.”

Once a vaccine candidate reaches all of its endpoints for safety and efficacy, the WHO’s plan will be implemented in two phases under a “fair allocation mechanism.” The first phase has two discrete parts. After enough doses of a successful candidate are produced, each participating country will receive enough doses for 3 percent of their population. That first batch would go to health care and social care workers on the frontlines of the pandemic. After that first batch is distributed, a second set of doses will be distributed equally so 20 percent of the population can be inoculated. The second set of doses will be for vulnerable populations like the elderly and people with complicating health conditions, according to Science.

The second phase will distribute vaccine doses by need rather than by equal distribution. Countries that take part in Covax will receive vaccines based on how desperately they are needed. To determine urgency, Covax will look at the transmission rate, whether other diseases like flu are spreading rapidly, and if a healthcare system is seeing its hospitals and intensive care units overwhelmed, as Science reported.

“Providing each country with enough doses to start protecting the health system and those at higher risk of dying is the best approach to maximize the impact of the small quantities of vaccines,” said Mariângela Batista Galvão Simão, the WHO’s assistant director general for access to medicines and health products, as The Washington Post reported.

While the first phase of the plan may not address the most dire and urgent situations, the equal distribution of the vaccine in proportion to population is meant to encourage more countries to participate in Covax, according to The Washington Post.

“It’s a very pragmatic and expedient way of trying to put forward a simple plan and will not ignite a food fight among different member states in the first phase,” said J. Stephen Morrison, director of the Global Health Policy Center at the Center for Strategic and International Studies, as The Washington Post reported.