Hot Arctic and a Chill in the Northeast: What’s Behind the Gloomy Spring Weather? 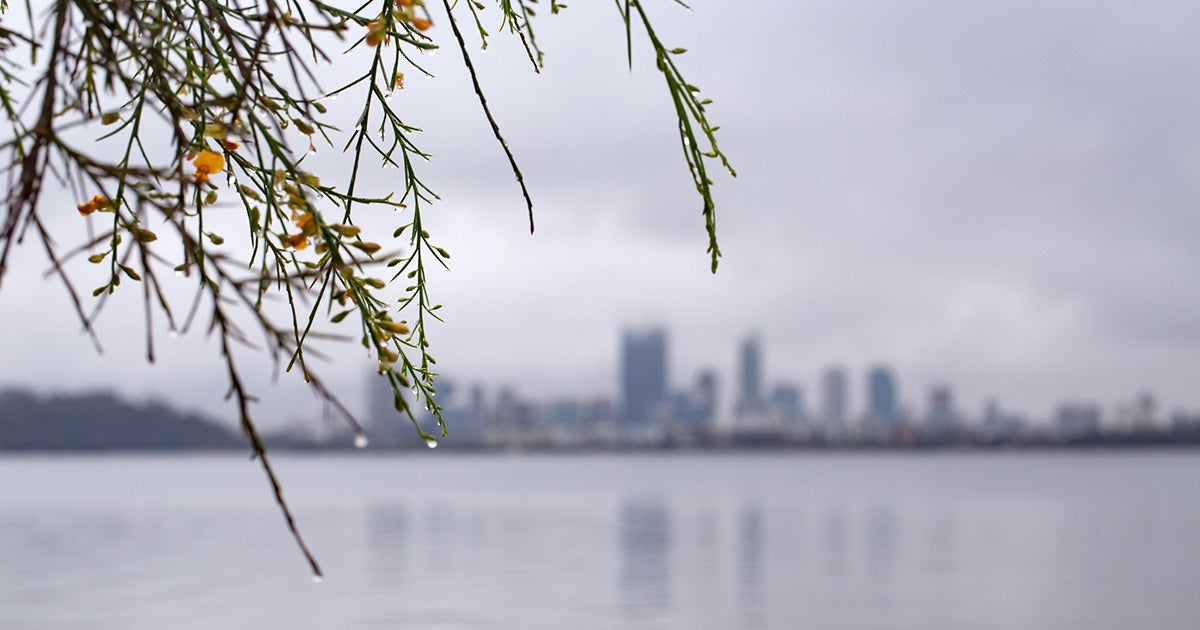 When temperatures hit the 80s Fahrenheit in May above latitude 40, sun-seekers hit the parks, lakes, and beaches, and thoughts turn to summer. By contrast, when temperatures lurk in the drizzly 40s and 50s well into flower season, northerners get impatient for summer. But when those 80-degree temperatures visit latitude 64 in Russia, as they just did, and when sleet disrupts Mother’s Day weekend in May in Massachusetts, as it just did, thoughts turn to: what is going on here?

Before we jump into the science, let’s take a quick look at the unusual spring weather. This past weekend, Russia was the scene of record-high temperatures. A city above the Arctic circle — Arkhangelsk — recorded a high of 84 degrees Fahrenheit on May 11 at the Talagi Airport weather station. The average high temperature for Arkhangelsk this time of year is around 54 degrees Fahrenheit.

Meanwhile in the Northeast U.S., try having a conversation that doesn’t loop back to the endlessly gloomy, chilly, unseasonable weather. When gloomy weather becomes such a dominant topic of conversation in a region, a form of citizen science is occurring, and it tells you something: it is unusual, it is anomalous, it is downright wacky.

Many locations are not seeing the sun nearly as much as normal memory serves — and science confirms — for this time of year. The Long Island town of Islip, New York, recorded its longest streak of rainy days on record from April 20 to May 7. It rained for 21 days this April in Boston.

As of this writing, there are headlines with exasperated tones wondering when winter will truly depart, including:

In that third article, Jason Samenow describes the abnormal late May forecast for snow, hail, tornadoes, flooding, and excessive heat to different parts of the contiguous US over upcoming days. 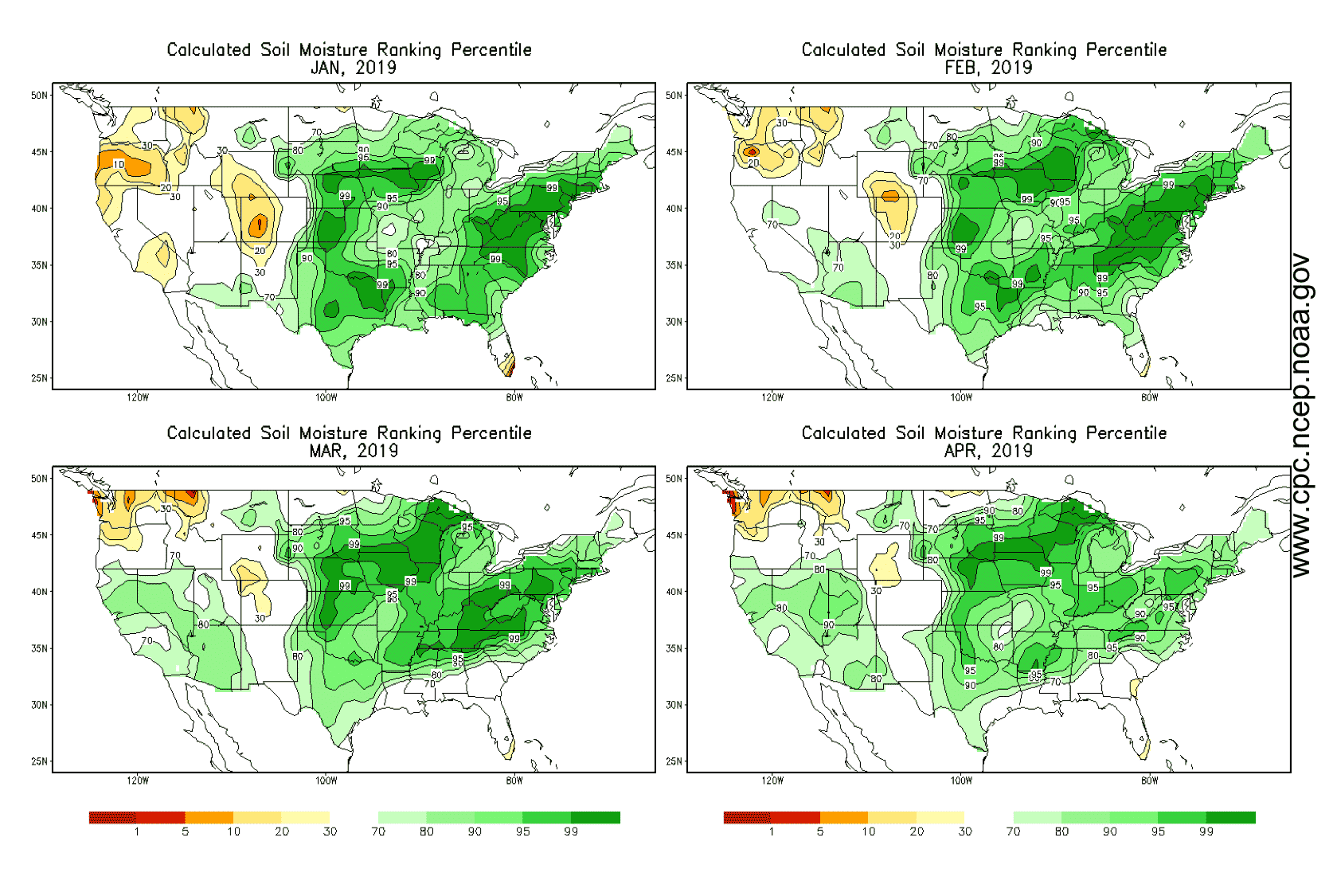 Continental U.S. Monthly Soil Moisture ranking percentile for Jan-April 2019. Repeated rain events resulted in a large portion of the contiguous U.S. being ranked in the 99th percentile for soil moisture on May 14.

Unfortunately, the consequences of these gloomy, chilly and rainy or snowy conditions are very real in terms of damages, both personal and in the larger economy. People are taking time away from work — lost labor hours — to deal with them. People are pumping water out of basements and throwing away cherished items lost to water damage.

Some of the flooding is from intense storms like the two rare interior U.S. bomb cyclones that caused flooding and prompted governors to spring into action, calling on the National Guard. There is a current backlog of unmet disaster relief requests. Some of the flooding is from water tables rising since relentless repeated rain events don’t allow the soil enough time to dry out.

The natural and human-driven aspects of flooding are critical to tease apart so we can better prepare our communities for the flood risk of today and the changing flood risks of the decades ahead. This is especially important when investing dollars in infrastructure that are anywhere near surface water or groundwater (also known as the water table).

It may seem counter-intuitive, but the story of the strange weather unfolding this spring in the U.S. is related in part to snow last October in Eurasia. This indicator — the Eurasian October snow cover extent indicator — is proving to be worthy of additional attention by U.S. weather geeks. The good news is that the scientists who were paying attention to the Eurasia snow extent behavior during October, along with a host of other indicators, gave advanced warning of the emerging U.S. winter and spring weather pattern for 2018/2019. Winter sports enthusiasts rejoiced and sought the snow-peaked slopes of Colorado and Utah.

The bad news is it can feel extremely bouncy going through record-breaking cold and record flooding, with temporary relief periods over these past months. It can feel like riding a seesaw. But the lasting memory of the major pattern is what becomes the talk of the region. Terrific winter snowpack, tragic flooding and gloomy northeast.

You may wonder about the Eurasian snow extent indicator and the broader connections. I encourage those who want to know, to spend some time clicking on the links here or links in earlier blogs that point to even more information (see here, here, here and here). These describe the details regarding how Arctic sea ice decline, particularly in the Barents-Kara sea ice, north of Scandinavia and Russia, contributes to ocean and atmosphere behavior. Which contributes to Eurasian snow cover extent behavior. And ultimately a wavy jet stream with episodic cold outbreaks over winter and spring in the Northern Hemisphere, including the U.S.

Here is an example of the science as Judah Cohen explained, “There is a growing consensus that it is Barents-Kara sea ice in the late fall and early winter that has the greatest impact across Eurasia. Therefore, low Barents-Kara sea ice in November for example, favors a strengthened Siberian high, increased poleward heat flux, a weak stratospheric Polar Vortex and finally a negative Arctic Oscillation. An important point regarding the Siberian high is that it strengthens or expands northwest of the climatological center. For low snow cover and/or high sea ice the opposite occurs.” Translation, a weakened polar vortex means more cold outbreaks deep into U.S. territory like this past winter and spring.

This is little consolation to those throwing out their flood-soaked cherished items from Kansas to Maine this spring season.