What Is Fatty Liver Disease? 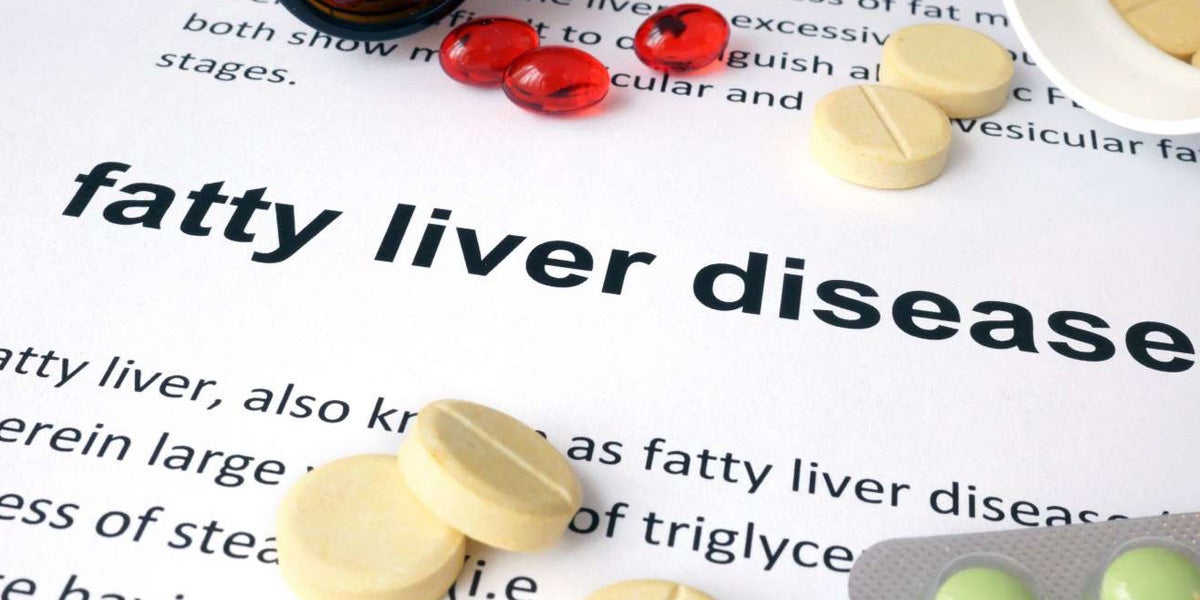 Fatty liver disease is becoming increasingly common in many parts of the world, affecting about 25 percent of people globally (1).

It is linked to obesity, type 2 diabetes and other disorders characterized by insulin resistance.

What’s more, if fatty liver isn’t addressed, it may progress to more serious liver disease and other health problems. 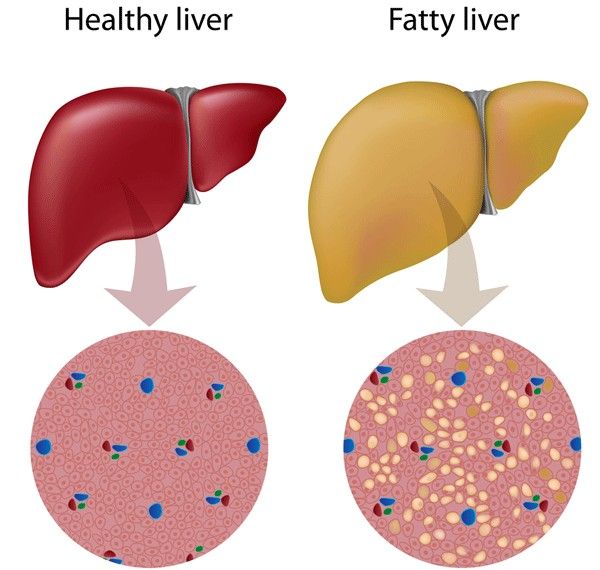 What Is Fatty Liver?

Fatty liver occurs when too much fat builds up in liver cells. Although it is normal to have a tiny amount of fat in these cells, the liver is considered fatty if more than 5 percent of it is fat (2).

While drinking too much alcohol can lead to fatty liver, in many cases it does not play a role.

A number of fatty liver conditions fall under the broad category of non-alcoholic liver disease (NAFLD), which is the most common liver disease in adults and children in Western countries (2, 3).

NASH involves greater fat accumulation and inflammation that damages the liver cells. This can lead to fibrosis or scar tissue, as liver cells are repeatedly injured and die off.

Unfortunately, it is difficult to predict whether fatty liver will progress to NASH, which greatly increases the risk of cirrhosis (severe scarring that impairs liver function) and liver cancer (4, 5).

NAFLD is also linked to an increased risk of other diseases, including heart disease, diabetes and kidney disease (6, 7, 8).

Bottom Line: Fatty liver occurs when too much fat builds up in the liver. Fatty liver is reversible at an early stage, but it sometimes progresses to advanced liver disease.

There are several factors that may cause or contribute to developing fatty liver:

There are several signs and symptoms of fatty liver, although not all of these may be present. In fact, you may not even realize you have fatty liver.

If fatty liver progresses to NASH, the following symptoms may develop:

It’s important to see your doctor regularly for standard exams and blood tests that can diagnose fatty liver at the early, reversible stage.

Dietary Strategies for Getting Rid of Fatty Liver

There are several things you can do to get rid of fatty liver, including losing weight and cutting back on carbs. What’s more, certain foods can help you lose liver fat.

Lose Weight and Avoid Overeating If Overweight or Obese

Weight loss is one of the best ways to reverse fatty liver if you are overweight or obese.

In fact, weight loss has been shown to promote loss of liver fat in adults with NAFLD, regardless of whether the weight loss was achieved by making dietary changes alone or in combination with weight loss surgery or exercise (20, 21, 22, 23, 24).

In a three-month study of overweight adults, reducing calorie intake by 500 calories per day led to an 8 percent loss of body weight, on average and a significant decrease in fatty liver score (21).

What’s more, it appears that the improvements in liver fat and insulin sensitivity may persist even if some of the weight is regained (25).

It may seem as though the most logical way to address fatty liver would be to cut back on dietary fat.

During DNL, excess carbs are converted into fat. The rate at which DNL occurs increases with high intakes of fructose-rich foods and beverages (27).

In one study, obese adults who consumed a diet high in calories and refined carbs for three weeks experienced a 27 percent increase in liver fat, on average, even though their weight only increased by 2 percent (15).

In one study, liver fat and insulin resistance decreased significantly more when people consumed a Mediterranean diet than when they consumed a low-fat, high-carb diet, even though weight loss was similar on both diets (33).

Although both Mediterranean and very low-carb diets have been shown to reduce liver fat on their own, one study that combined them showed very impressive results.

In this study, 14 obese men with NAFLD followed a Mediterranean ketogenic diet. After 12 weeks, 13 of the men experienced reductions in liver fat, including three who achieved complete resolution of fatty liver (31).

Include Foods That Promote Loss of Liver Fat

In addition to cutting back on carbs and avoiding excess calorie intake, there are certain foods and beverages that may be beneficial for fatty liver:

Bottom Line: Losing weight, avoiding overeating, including certain foods in your diet and cutting back on sugar and carbs may help reduce liver fat.

Physical activity can be an effective way to decrease liver fat.

Studies have shown that engaging in endurance exercise or resistance training several times a week can significantly reduce the amount of fat stored in liver cells, regardless of whether weight loss occurs (42, 43, 44).

In a four-week study, 18 obese adults with NAFLD who exercised for 30–60 minutes five days per week experienced a 10 percent decrease in liver fat, even though their body weight remained stable (44).

High-intensity interval training (HIIT) has also been shown to be beneficial for decreasing liver fat (45, 46).

In a study of 28 people with type 2 diabetes, performing HIIT for 12 weeks led to an impressive 39 percent reduction in liver fat (46).

However, even lower-intensity exercise can be effective at targeting liver fat. According to a large Italian study, it appears that how much you exercise is most important.

In that study, 22 diabetics who worked out twice per week for 12 months had similar reductions in liver fat and abdominal fat, regardless of whether their exercise intensity was considered low-to-moderate or moderate-to-high (47).

Since working out regularly is important for reducing liver fat, choosing something you like doing and can stick with is your best strategy.

Supplements That May Improve Fatty Liver

Results from several studies suggest that certain vitamins, herbs and other supplements may help reduce liver fat and decrease the risk of liver disease progression.

However, in most cases, experts say that further research is required to confirm this.

In addition, it’s important to speak with your doctor before taking any supplements, especially if you are taking medication.

Milk thistle, or silymarin, is an herb known for its liver-protecting effects (48).

Some studies have found that milk thistle, alone or in combination with vitamin E, may help reduce insulin resistance, inflammation and liver damage in people with NAFLD (49, 50, 51, 52).

In a 90-day study of people with fatty liver, the group who took a silymarin-vitamin E supplement and followed a low-calorie diet experienced twice the reduction in liver size as the group who followed the diet without taking the supplement (52).

The dosages of milk thistle extract used in these studies were 250–376 mg per day.

However, although experts believe that milk thistle shows promise for use in NAFLD, they feel that more studies are needed to confirm its effectiveness for both short- and long-term use (53).

Berberine is a plant compound that has been shown to significantly reduce blood sugar, insulin and cholesterol levels, along with other health markers (54).

Several studies also suggest that it may benefit people with fatty liver (55, 56, 57).

In a 16-week study, 184 people with NAFLD reduced their calorie intake and exercised for at least 150 minutes per week. One group took berberine, one took an insulin-sensitizing drug and the other group took no supplement or medication (57).

Those taking 500 mg of berberine, three times per day at meals, experienced a 52 percent reduction in liver fat and greater improvements in insulin sensitivity and other health markers than the other groups.

Researchers say that despite these encouraging results, further studies are needed to confirm berberine’s effectiveness for NAFLD (58).

Omega-3 fatty acids have been credited with many health benefits. The long-chain omega-3s EPA and DHA are found in fatty fish, such as salmon, sardines, herring and mackerel.

In a controlled study of 51 overweight children with NAFLD, the group who took DHA had a 53 percent reduction in liver fat, compared to 22 percent in the placebo group. The DHA group also lost more belly fat and fat around the heart (60).

Furthermore, in a study of 40 adults with fatty liver, 50 percent of those who took fish oil in addition to making dietary changes had reductions in liver fat, while 33 percent experienced a complete resolution of fatty liver (63).

The dosages of omega-3 fatty acids used in these studies were 500–1,000 mg per day in children and 2–4 grams per day in adults.

Although all the studies above used fish oil, you can get the same benefits by consuming fish high in omega-3 fats several times a week.

Importantly, these studies show that certain supplements appear to enhance the effects of lifestyle changes. Taking them without following a healthy diet and exercising regularly will likely have little effect on liver fat.

Bottom Line: Supplements that may help reverse NAFLD include milk thistle, berberine and omega-3 fatty acids. They are most effective when combined with lifestyle changes.

Fatty liver can lead to a number of health problems. Fortunately, it can be reversed if addressed at an early stage.