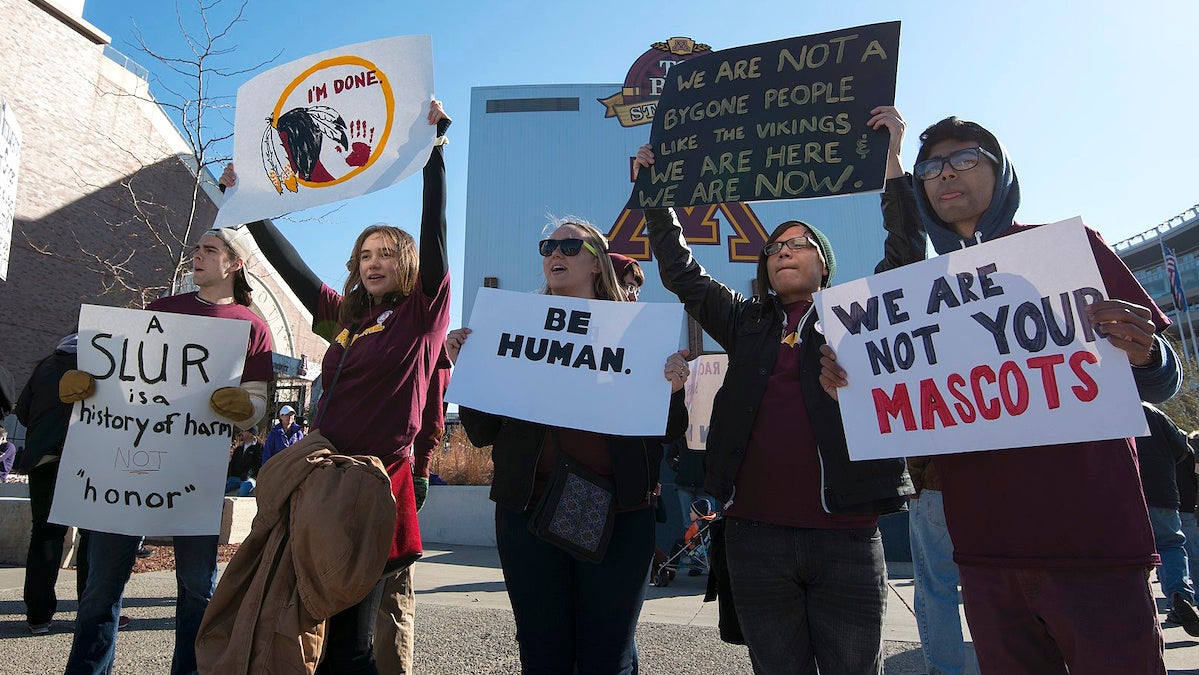 A protest against the name of the Washington Redskins in Minneapolis, Minnesota on Nov. 2, 2014. Fibonacci Blue / CC BY 2.0

The decision follows a review of the name and logo that the team announced July 3 “in light of recent events around our country.”

“Today, we are announcing we will be retiring the Redskins name and logo upon completion of this review,” the team said in a statement.

The announcement comes as a swift and sudden reversal from team owner Dan Snyder. In 2013, he told USA TODAY to “put it in all caps” that he would never change the name, ESPN reported. But then came the massive protests following the police murder of George Floyd, which prompted a nationwide reckoning over racial justice. A few weeks later, multiple sources said Snyder had been discussing the team’s name with the NFL for weeks.

The team also faced increased corporate and activist pressure. Eighty-seven investors and shareholders signed a letter to team sponsors FedEx, PepsiCo and Nike asking them to stop doing business with the team until the name was changed. All three responded with statements saying they had told the team to change its name, and FedEx said it would take its name off the stadium if this did not happen.

When the team announced it was considering a change, activist group Change The Mascot urged it to abandon the name immediately.

“There is no reason not to immediately announce that the team is changing the mascot, since any real review will lead to the inevitable conclusion that the deeply offensive and racist name of Washington’s NFL team must go now,” Change the Mascot leader Ray Halbritter said in a press release. “Team owner Dan Snyder can stand on the right side of history and create a new, positive legacy for his team, or instead continue embracing a bigoted slur that denigrates Native Americans and people of color.”

The team has not yet announced a new name or logo, but ESPN’s Adam Schefter reported that it would no longer use Native American imagery.

“Dan Snyder and Coach [Ron] Rivera are working closely to develop a new name and design approach that will enhance the standing of our proud, tradition-rich franchise and inspire our sponsors, fans and community for the next 100 years,” the team said Monday.

The team has used the Redskins name for 87 years and the logo was designed by a Native American in 1971.

While the change was precipitated by recent protests, the movement to end the use of Native American imagery for names and mascots began in the 1970s, Indian Country Today reported. Native American groups have targeted the Redskins name specifically for decades, and a recent UC Berkeley study found that 67 percent of respondents who strongly identified as Indigenous thought the name was offensive.

While hundreds of universities and schools have retired Native mascots in recent years, professional sports teams like the Kansas City Chiefs, the Atlanta Braves and the Cleveland Indians have resisted, The New York Times pointed out.

But activists vowed to keep fighting.

“Dear @Braves, @Chiefs, @NHLBlackhawks: The target on your backs just got much larger,” the group Not Your Mascot tweeted.

The target on your backs just got much larger.