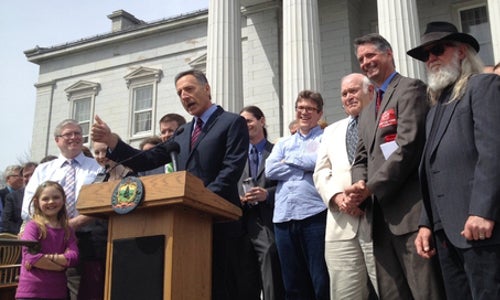 Today, Center for Food Safety (CFS) celebrated an historic achievement in Vermont—passage of the first no strings attached bill requiring the labeling of genetically engineered (GE) foods. The occasion marks an important day both for the food movement, with its many activists and partners, and for Center for Food Safety, which has been involved in the push for GE labeling for over a decade. 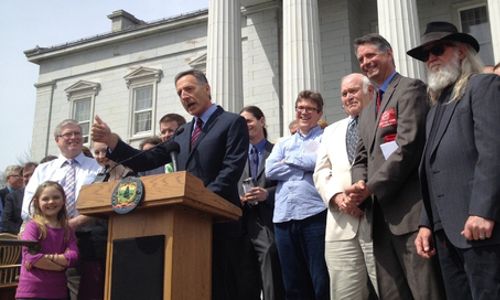 “To the people, legislators, and activists of Vermont, thank you for your tireless efforts in advancing the people’s right to know. Center for Food Safety is extremely proud to have worked alongside so many fearless advocates over the past ten years,” said Andrew Kimbrell, executive director for CFS.

The fight for legislation to require the labeling of genetically engineered foods has been fought on multiple fronts. CFS has led the federal rulemaking process since 2011, when it submitted a legal petition to the U.S. Food and Drug Administration (FDA) providing a blueprint for the agency to enact a federal rule under authority granted by the Food, Drug and Cosmetic Act. That petition is supported by more than 650 organizations and business, and more than 1.4 million people have since submitted comments in support.

While no action has been taken at the federal level, numerous states, bolstered by the legal and scientific expertise of CFS, have introduced legislation or ballot initiatives of their own. Connecticut and Maine each successfully passed GE labeling laws, though they are contingent on other regional states to also pass laws before they would go into effect. The Vermont bill is the first GE labeling law to pass without such a trigger.

“Center for Food Safety is committed to pursuing mandatory GE labeling across the country until every American is assured the right to know what is in their food,” said Kimbrell. “Transparency in a sector that is integral to our lives every single day is absolutely essential.”

CFS has provided legal expertise to numerous states pursuing mandatory GE labeling, and continues to offer expert testimony at legislative hearings across the country, including New York, Massachusetts, California and Oregon. CFS closely monitors both the state level and global landscape on GE labeling. There are currently 64 countries with labeling laws and more than 60 state bills were introduced over the past year.

Just today, it was announced by the Oregon Supreme Court that it has certified a proposed 2014 ballot initiative on GE labeling, allowing the signature gathering process to begin in advance of November elections.

With the success of Vermont, eyes now turn back to Washington, DC, where Center for Food Safety has been a vocal proponent of the Genetically Engineered Food Right-to-Know Act (H.R. 1699/S. 809) introduced last year by Rep. Peter DeFazio (D-OR) and Sen. Barbara Boxer (D-CA). This common sense bill directs FDA to use its authority to enact a federal, mandatory GE labeling policy that would guarantee all Americans the right to know.

Standing in the way of that right is a bill introduced by Rep. Mike Pompeo (R-KS), with the backing of the Grocery Manufacturers Association, which has been dubbed “Denying Americans the Right-to-Know” (DARK) Act and would block any federal or state action to require the labeling of GE foods. Center for Food Safety is working with allies in Washington to ensure this bill does not allow the interests of Big Food and the chemical industry to trump the rights of Vermonters or Americans nationwide.