Only 10 Vaquita Porpoises Remain in the World, Scientists Announce 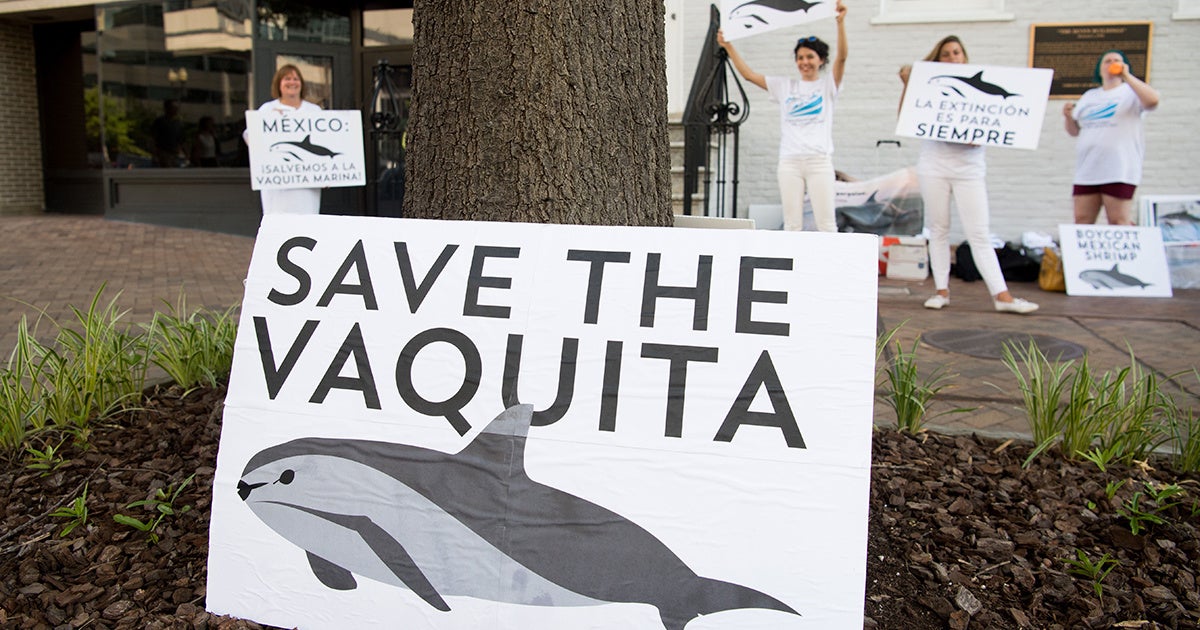 Demonstrators with the Animal Welfare Institute hold a rally to save the vaquita, the world's smallest and most endangered porpoise in Washington, DC, on July 5, 2018. SAUL LOEB / AFP / Getty Images

Scientists announced Thursday that only 10 vaquita porpoises likely remain in the world and that the animal’s extinction is virtually assured without bold and immediate action.

The vaquita, the world’s smallest and most endangered cetacean, is found only in Mexico’s northern Gulf of California. The release of the new vaquita estimate comes just two days after reports of the possible first vaquita mortality of 2019. More details are expected in the coming days.

Thursday’s announcement from the International Committee for the Recovery of the Vaquita also calls on Mexico President Andres Manuel Lopez Obrador to end all gillnet fishing and adopt a “zero tolerance” policy of enforcement in the vaquita’s small remaining habitat. The committee is an international team of scientific experts assembled in 1996 to assist in vaquita recovery efforts.

“One of Earth’s most incredible creatures is about to be wiped off the planet forever,” said Sarah Uhlemann, international program director at the Center for Biological Diversity. “Yet Mexico has only made paper promises to protect these porpoises from deadly nets, without enforcement on the water. Time is running out for President Lopez Obrador to stop all gillnet fishing and save the vaquita.”

The vaquita faces a single threat: entanglement in illegal gillnets set for shrimp and various fish species, including endangered totoaba. Totoaba swim bladders are illegally exported by organized criminal syndicates from Mexico to China, where they are highly valued for their perceived medicinal properties.

Despite efforts in Mexico to curb gillnet fishing of shrimp and other fish and efforts in China to reduce demand for totoaba, the vaquita’s population dropped 50 percent in 2018, leaving an estimate of around 10 remaining vaquita, with no more than 22 and perhaps as few as six.

“There is only the tiniest sliver of hope remaining for the vaquita,” said Kate O’Connell, a marine wildlife consultant with the Animal Welfare Institute. “Mexico must act decisively to ensure that all gillnet fishing is brought to an end throughout the Upper Gulf. If the vaquita is not immediately protected from this deadly fishing gear, it will go extinct on President Lopez Obrador’s watch.”

In 2017, in the face of international pressure, Mexico banned the use of most gillnets within the vaquita’s range, but enforcement has been lacking. For example, during the 2018 illegal totoaba fishing season, nearly 400 active totoaba gillnets were documented in a small portion of the vaquita’s range, and gillnets continue to be found within the vaquita refuge. Recent violence against conservationists in the region has limited critically important net removal efforts.

“If Mexico doesn’t want to be guilty of wiping out a species, it needs to secure 100 percent gillnet-free habitat now,” said Zak Smith, a senior attorney with the Natural Resources Defense Council’s Marine Mammal Protection Project. “What’s happening to the vaquita is a disgrace and entirely preventable, yet the Obrador administration has not committed to a robust vaquita recovery plan and has already missed deadlines on vaquita conservation commitments.”

“The organized criminal networks trafficking totoaba swim bladders from Mexico to China are responsible for the illegal fishing nets driving the vaquita to extinction,” said Clare Perry, ocean campaign leader for the Environmental Investigation Agency. “Unless Mexico gets serious about enforcement and works with China and key transit countries to dismantle those networks, there is no hope for the remaining vaquita.”

Despite the marine mammal’s alarming decline, the international committee emphasized that the vaquita is not extinct and that recovery remains possible. They are still producing offspring, and the remaining animals are healthy, showing no signs of disease or malnutrition. The international community plays a critical role in vaquita conservation.

In 2018 a U.S. court temporarily banned the import of seafood caught with dangerous gillnets in vaquita habitat. This year parties to the Convention on International Trade in Endangered Species of Wild Fauna and Flora (CITES) and the World Heritage Convention are considering additional conservation measures for the vaquita and totoaba.

On March 12th, 2019 The @MVFarleyMowat crew discovered a dead vaquita trapped in a totoaba gillnet. 🐬😢