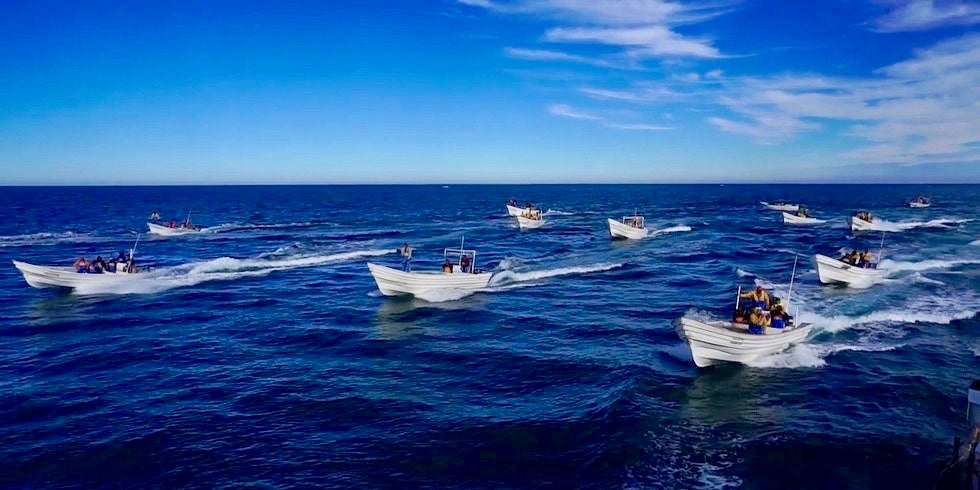 The environmental organization
Sea Shepherd Conservation Society says its crew was attacked Wednesday by roughly 35 fishing boats inside a vaquita refuge in Mexico’s Gulf of California.

The vaquita is the world’s most endangered marine mammal, with only about a dozen left in their habitat in the Sea of Cortez,
according to experts. The porpoises are not directly hunted but get entangled and drown in illegal gillnets set for capturing totoaba, a large and critically endangered fish that’s prized for its swim bladder as a Chinese delicacy.

The fishermen were participating in “obvious illegal poaching” of totoaba, according to a Sea Shepherd press release sent to EcoWatch. The video shows some of the skiffs carrying gillnets, even though they are banned within the vaquita reserve.

The poachers attacked by hurling leadweights, anchors, trash, dead fish and even Tabasco sauce at the vessel and its wheelhouse windows in addition to threatening ship’s crew with Molotov cocktails, spraying gasoline at the ship and pouring gas in the sea around the vessel.

The video also shows the crew on the Farley Mowat using a hose to repel some of the boats.

Sea Shepherd said that while its vessel was temporarily immobilized after the propeller fouling, five fishermen boarded the ship and looted multiple objects from the deck.

“During the illegal boarding, the Sea Shepherd crew was able to keep the poachers from entering into the ship, and used an emergency firehose to repel the boarders, while waiting for naval forces to arrive,” the press release said. “At this time a Mexican Naval Helicopter made several passes above the scene and the skiffs began to disperse.”

The vessel’s captain was eventually able restart the engines and headed to the port of San Felipe where the ship was met by the regional Navy Commander and reinforcements, according to Sea Shepherd.

Sea Shepherd conducts maritime patrols inside the vaquita refuge and had recovered three illegal gillnets in the morning before the attack. The group’s operations are conducted with the knowledge and cooperation of the Mexican government to help detect illegal fishing activities, the Associated Press noted.

Captain Paul Watson, founder and CEO of Sea Shepherd, said his organization “will not be deterred by violence.”

“Our mission is to prevent the extinction of the vaquita porpoise and we will continue to seize the nets of poachers in the Vaquita Refuge,” he said in the press release. “Sea Shepherd salutes the quick responsiveness of the Mexican Navy in defusing a dangerous situation.”

Near-Extinct #Vaquita Gets Another Lifeline from the Courts https://t.co/9e60Qslzvj @NRDC @ConservationOrg