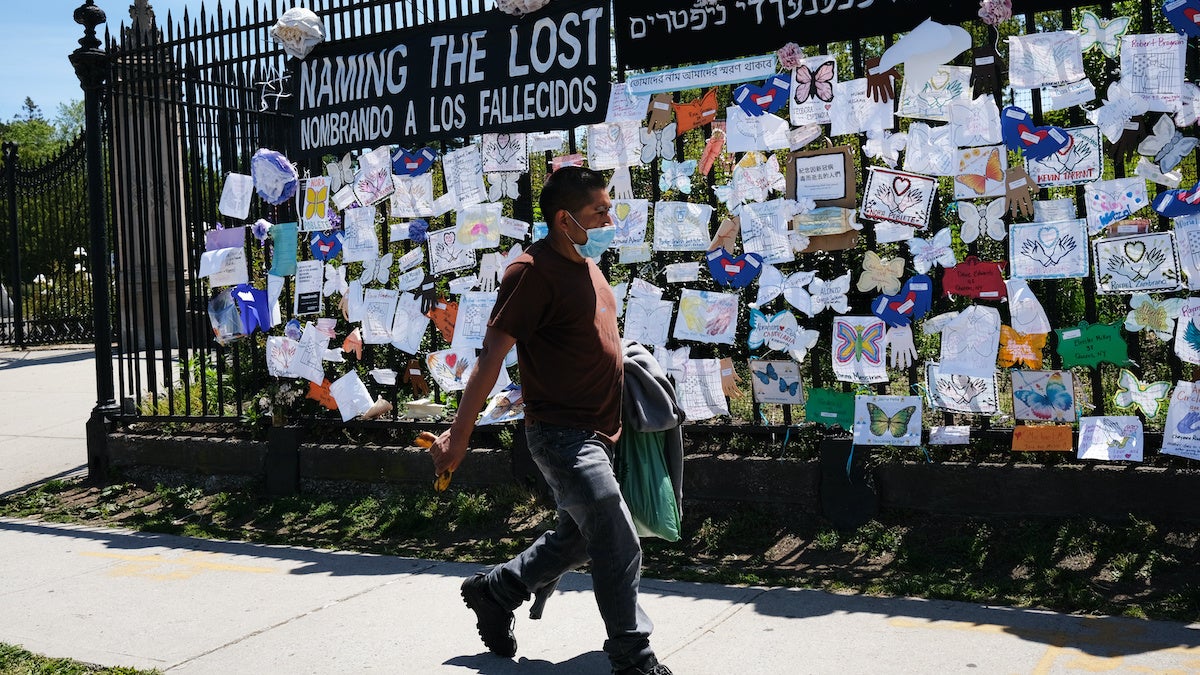 A man walks by a memorial for those who have died from the coronavirus outside Green-Wood Cemetery on May 27, 2020 in Brooklyn, New York. Green-Wood Cemetery, one of New York's oldest cemeteries, has been the site of hundreds of burials and cremations of Covid-19 victims. Spencer Platt / Getty Images

The U.S. death toll from the new coronavirus surpassed 100,000 Wednesday, even as all 50 states begin to reopen.

The U.S., with less than five percent of the world’s population, accounts for nearly a third of its coronavirus deaths, according to NPR. It has by far the highest death toll of any country in the world, and the virus that causes COVID-19 has now killed more Americans than every military conflict since the Korean War, The New York Times reported.

“Back in March, I did not think this would be possible — I was not expecting 100,000 deaths,” Christopher Murray, director of the Institute for Health Metrics and Evaluation at the University of Washington, told NPR. “I really believed we as a nation would have taken the decision to put in place social distancing and accepted the economic hardship that it’s creating, and that we would have stuck to it to get transmission down to a very low level.”

The first known U.S. coronavirus death occurred in Northern California Feb. 6, NBC News reported. That ballooned to an average of 2,000 deaths a day in April, and has fallen to an average of 1,400 a day in May, Reuters calculated. The U.S. now has more than 1.7 million confirmed cases. Worldwide, the disease has infected more than 5.6 million and killed more than 350,000.

The new virus has not been an equal opportunity killer in the U.S., NPR pointed out. According to calculations based on the first nearly 69,000 fatalities, it killed around twice the number of men than women under 75, and 80 percent of the dead were 65 or older. It has disproportionately impacted African American and Native American communities, and has taken a higher toll on low income areas.

“If you look at the locations where people are disproportionately dying, they are in places that are lower income,” University of Chicago Population Research Center Director Kathleen Cagney told NPR. “They are places that likely have multiple residents in a single-unit space. They are places where people rely on public transit and rely on services like big-box locations, where by entry alone you’re putting yourself at risk.”

The grim 100,000 milestone comes about a week after a Columbia University study found that the death toll could have been significantly lower if the country had entered lockdown just one week earlier, NPR reported at the time. If social distancing measures had begun March 8 instead of March 15, around 36,000 lives could have been saved.

President Donald Trump, who claimed as late as March that those with mild cases could still go to work, took to Twitter Wednesday to stave off criticism of his handling of the virus.

“The Radical Left Lamestream Media, together with their partner, the Do Nothing Democrats, are trying to spread a new narrative that President Trump was slow in reacting to Covid 19,” he wrote, as The New York Times reported. “Wrong, I was very fast, even doing the Ban on China long before anybody thought necessary!”

Former Vice President Joe Biden, his rival in the upcoming 2020 presidential election, posted a video Wednesday in which he did fault the administration for not acting sooner.

“This is a fateful milestone we should have never reached,” he said, according to The New York Times.

The concern now is that states will reopen too quickly. While the number of new cases and deaths have fallen nationwide, some locations have seen a surge in cases.

In New York state, the nation’s hardest hit, the daily death toll has declined to numbers not seen since March.

But a White House coronavirus task force report found that cases were surging by as much as 72 percent in cities around the country, according to NBC. In Mecklenberg County, North Carolina, where Charlotte is located, cases had nearly doubled between May 1 and Saturday. In Montgomery County, Alabama, they had nearly tripled during the same period, and the hospitals have been forced to send people to Birmingham.

“Right now, in Montgomery, we’re at a point where we can see the cliff, and we don’t want to get too close to it for fear of falling off,” Montgomery Mayor Steven Reed told MSNBC’s Rachel Maddow on Thursday. “We’re in a very dangerous predicament.”

Public health experts warn the death toll could keep climbing as all 50 states are moving to ease their lockdowns, surging past 140,000 by August.

“Now we’re almost getting the worst of both worlds — we’re getting the economic hardship and we’re relaxing,” Murray told NPR. “And it seems either now or in the fall, we’re going to have a big second wave, and we’ll be right back to dealing with pressure on the hospital system and dealing with, when is the peak surge coming?”